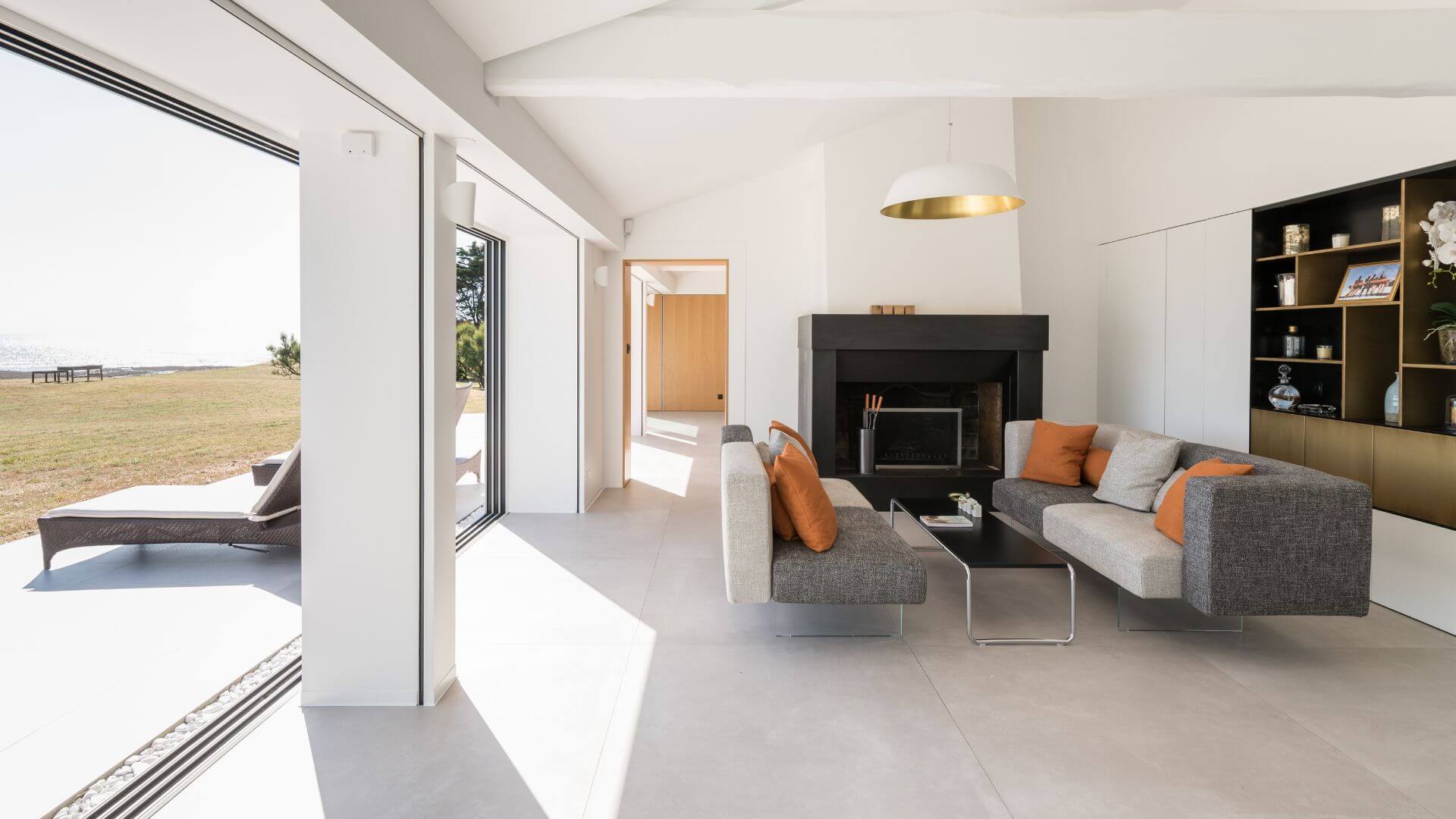 Martins | Afonso atelier de design: “Breaking the shift with the outdoor”. In this house, the living space unveils through views that change with the winds and tides, like a living and breathing postcard. The project emerges through these captured moments, where each new architectural fragment prints and dances in its context.

Firmly anchored on the seaside, on a sandhill in the south of L'île de Ré, this traditional house opens entirely onto the ocean. With a strong setting, the challenge of this renovation was to create a new living space using an aging existing structure with incredible potential.

When the inside invites itself outside

The owners wanted to refurbish the house in order to make it more suited to their way of life, more comfortable and, above all, adapted to their tastes. The project was based on a complete renovation of the house’s interior, and on a redefinition of the openings in the exterior space.

The connection between inside and outside spaces forms the heart of the project. It is one of the initial elements that change how one views the whole inhabited space. Indoor facilities were considered to create new identities for these areas, as well as to build privileged relationships with the outside. This work of sequencing is defined and underlined by the implementation of wood, contrasting with a mineral floor. These materials comprise the main thread between different rooms in the house, and ensure continuity to the outdoors. 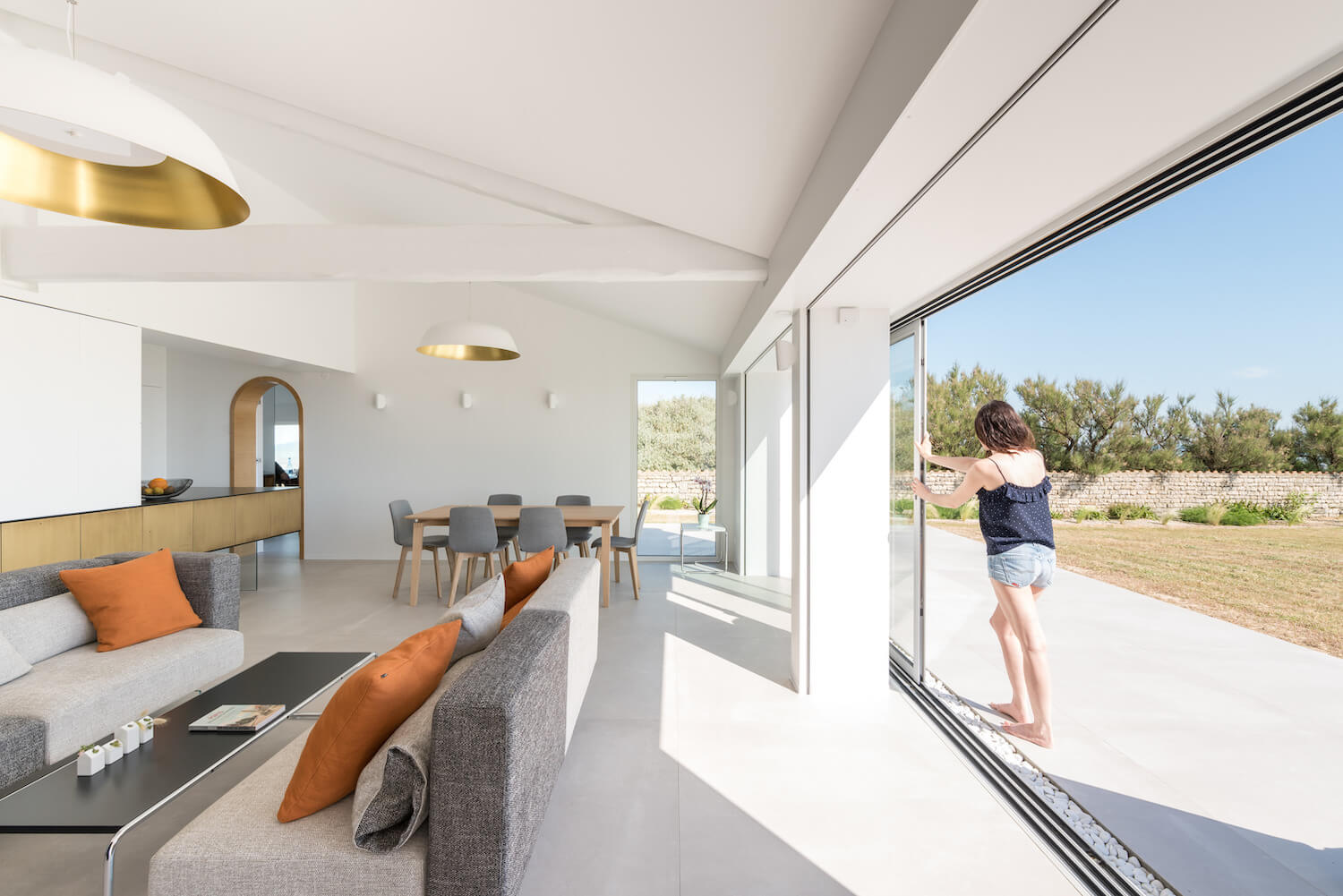 The house was conceived for a couple, but was also designed to be a relaxing and pleasant setting for family visits. With that goal in mind, the relaxation area at the heart of the house connects the dining room, the kitchen, the living room, and the bedrooms through an oak ribbon providing access to the different areas. The bedrooms, hidden behind the ribbon, are removed from the ascendancy of the house. The feeling projected is that it is a home that can be easily adapted to any lifestyle.

Some passages and storage areas are concealed, forming an integral part of the furnished units, including toilets that can be accessed from the living room unit, or a laundry room hidden behind mirrored doors at the back of the office.

In that same spirit, a staircase was conceived to provide access to an extra bed in one of the bedrooms, thought out with a set of volumes in mind, in Japanese steps to limit its scope, and creating storage spaces below each stair. A second staircase was implemented with a wooden lath railing, behind which additional storage is concealed.

Numerous details punctuate these clean spaces, comprised of lines nuanced with white, at times mat, satiny, or even shiny. These details are highlighted by such materials as granite and brass wire, and by the careful use of oak, evidenced by the creation of sub-doors and sliding doors, along with hollow joints that make the dialogue with the original structure more subtle. 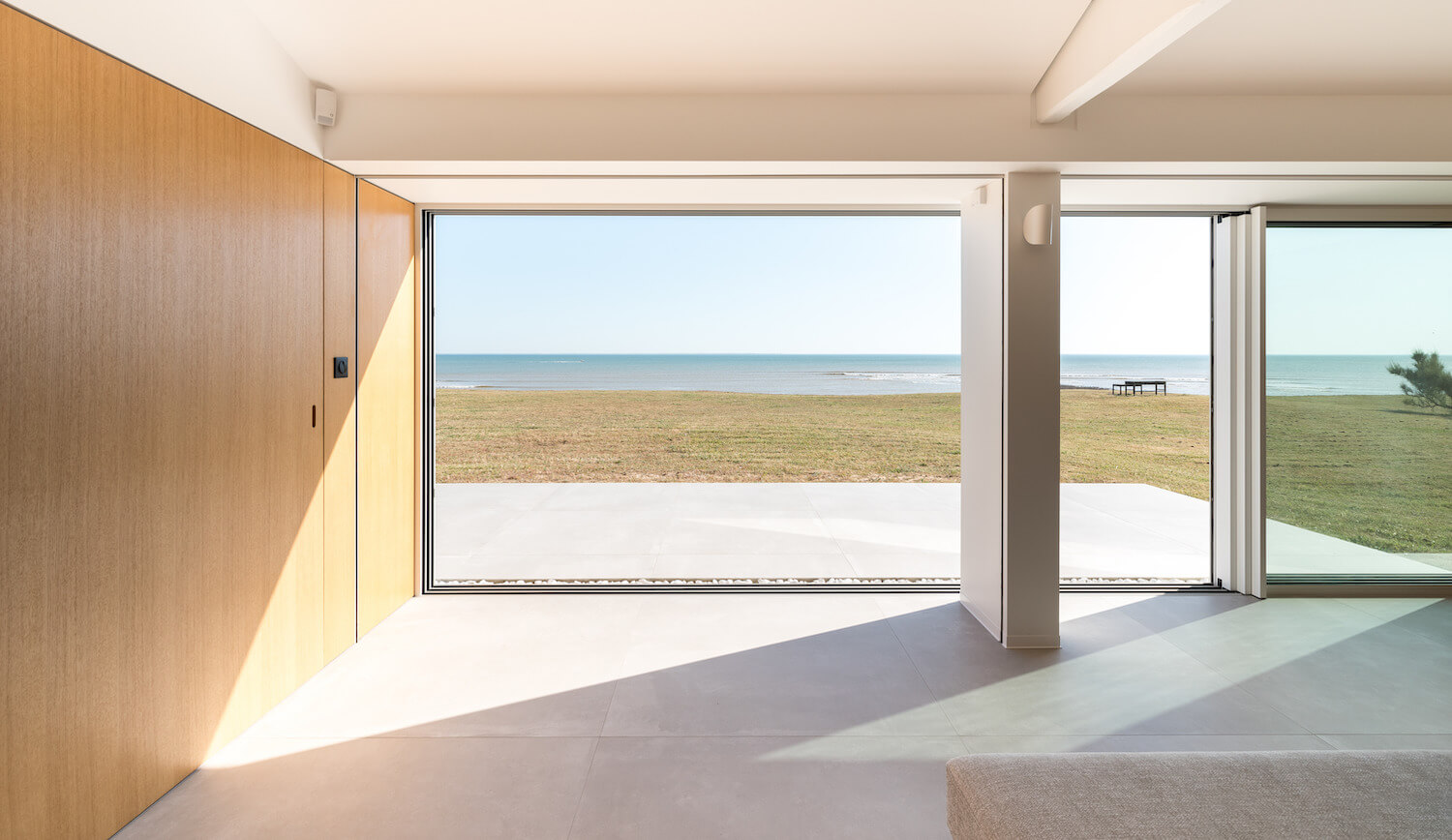 The master bedroom represents and sums up the conceptual outcome adapted to the customers’ use of a restricted space. This room is a sequence of plans, views, and hidden spaces, starting with the entrance, before the overall storage facilities and the toilets. At the center of the bedroom, the headboard sits enthroned like a sculpted stele. Behind it, a large shower is accessible from both sides and leads to an ocean view through a glass banner. A new layer encloses this well-being space. A wide, one-block glass wall separates the shower from the sinks. Between them is a rift, like a crevice opening on a custom-made bathtub, not unlike a wavy ribbon draped with a mosaic of softened black marble, conferring to a hammam-like atmosphere suitable for relaxation.

Like a theatrical production, other details accentuate the spaces and highlighting their uses. A smaller, more private bathroom, entirely adorned with white mosaic and shaded with mother-of-pearl, creates a peaceful atmosphere with an attention to detail in its curved forms.

The central kitchen island is one of the masterpieces of the house, like a sculpture made of black granite and old brass. It creates an articulation between the kitchen area, the dining area, and the living area. The block, anchored in the living room furniture, lengthens into the void, standing thanks to only a glass frame. This striking contrast of seeing a block of stone facing the notion of lightness surprises as much as it impresses, and the assembly and beveled treatments of granite that welcome the brass doors reinforce this massive aspect.

Everything was conceived with attention to detail so that each architectural element could find its space. The ocean invites itself into each room and creates an enchanting scene welcoming us to calm and contemplation. 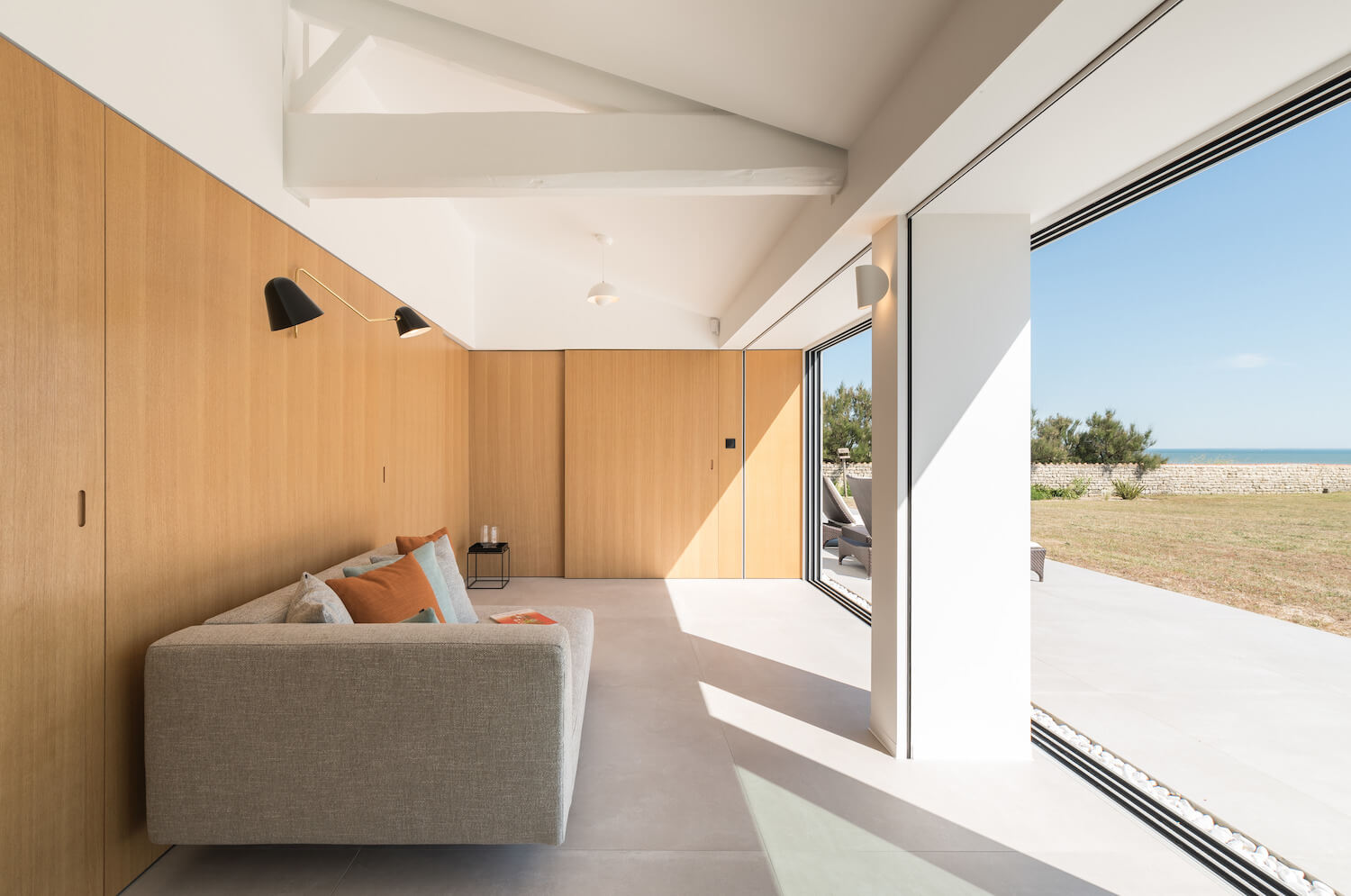 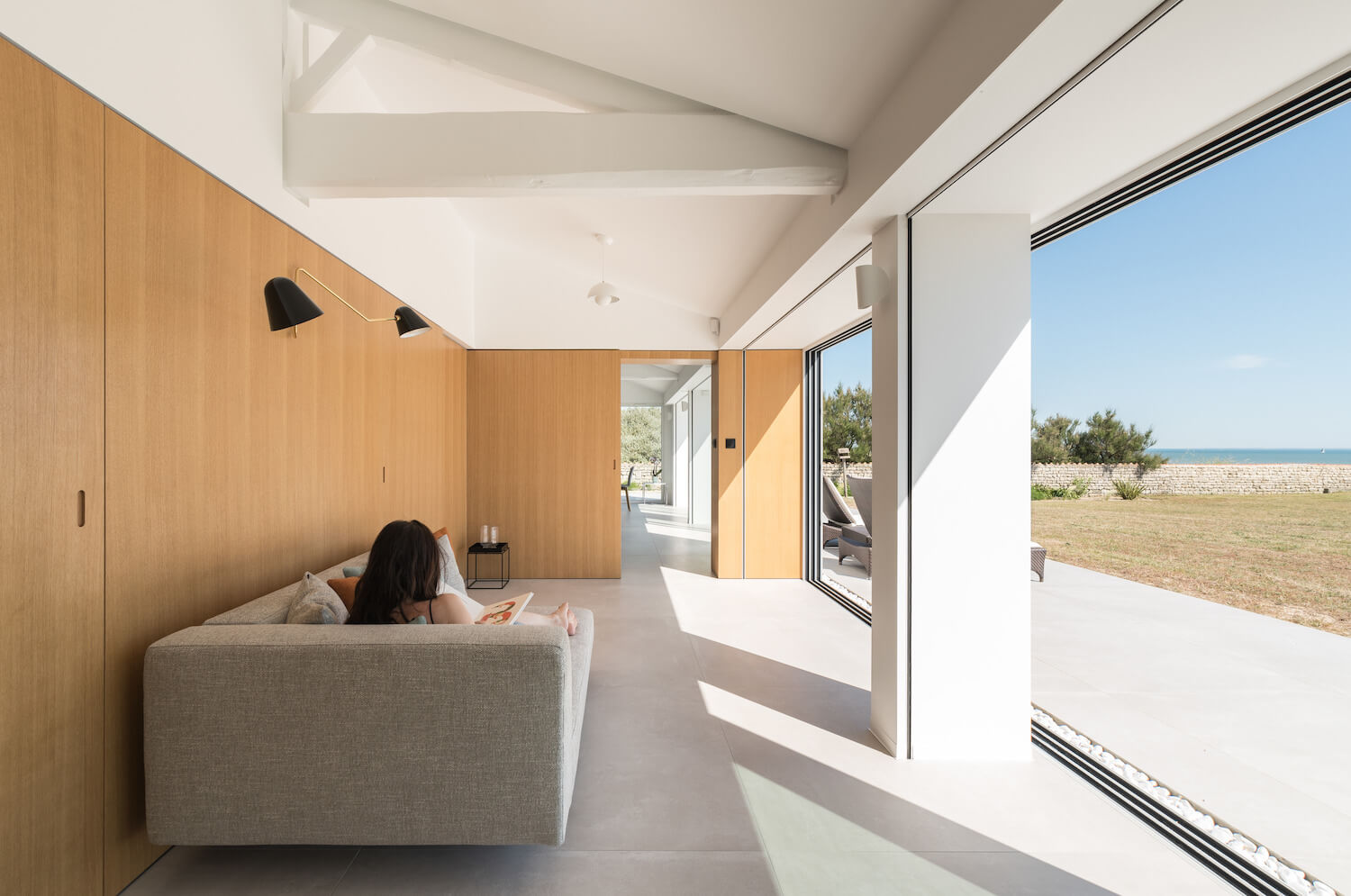 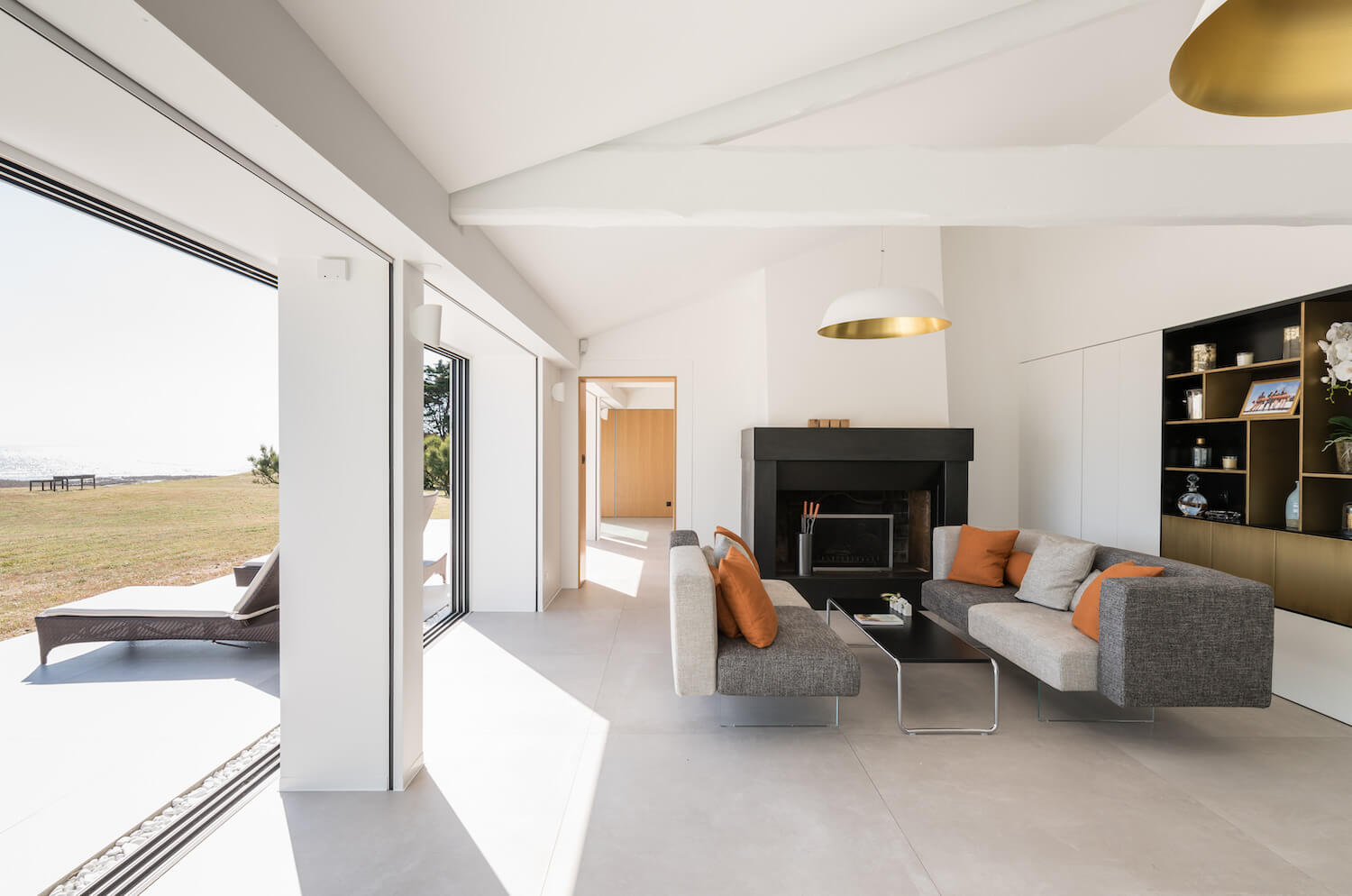 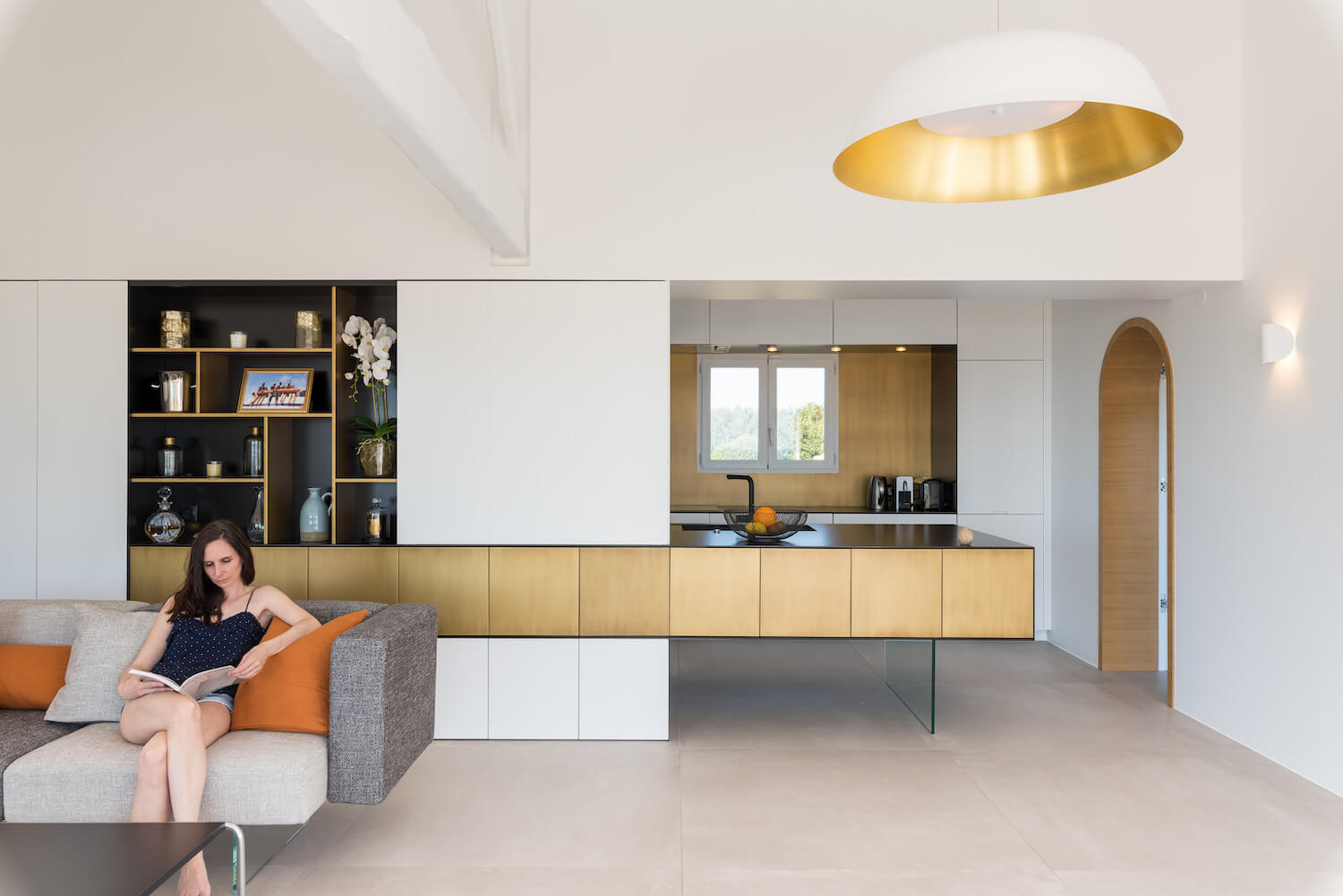 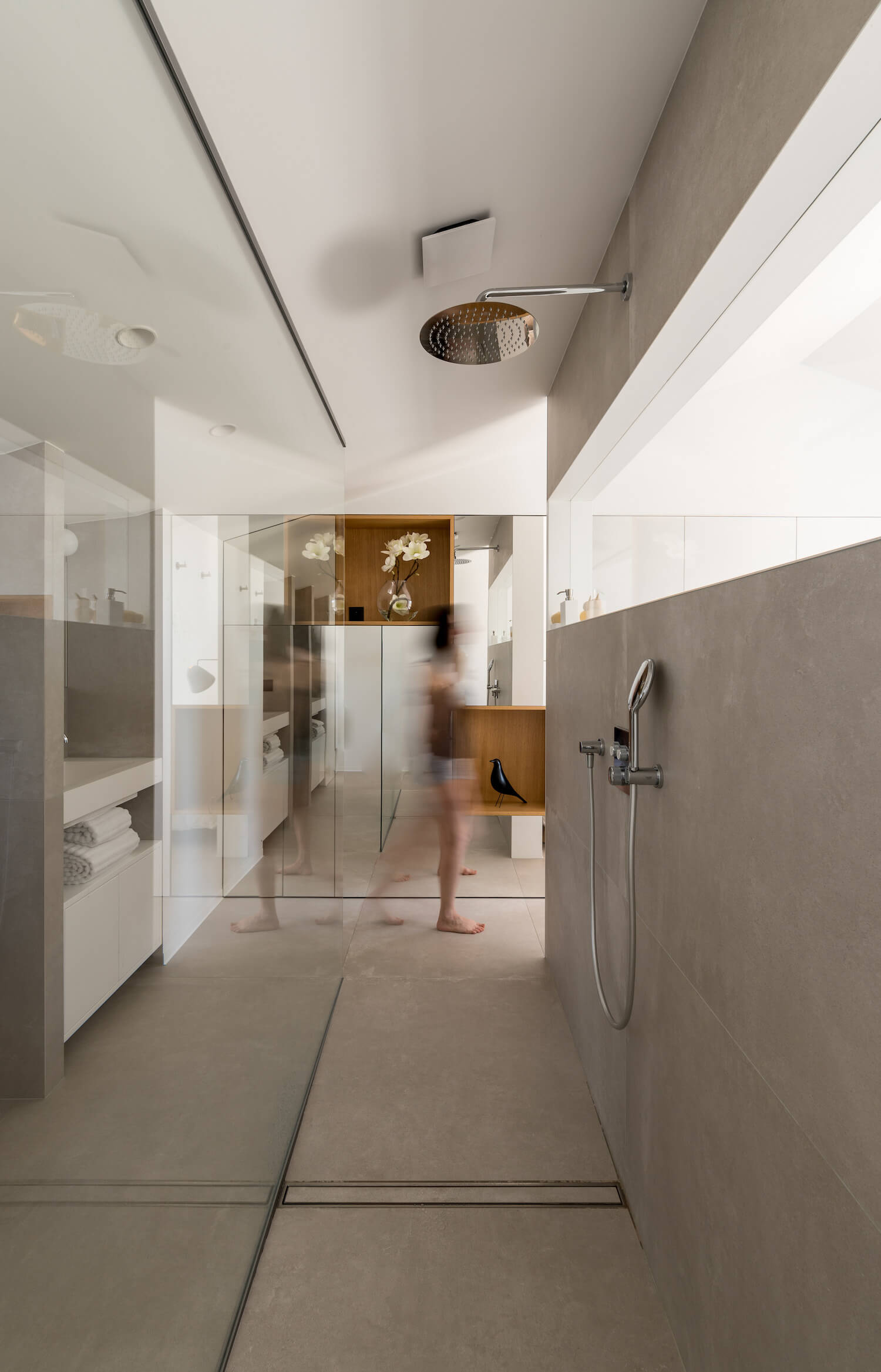 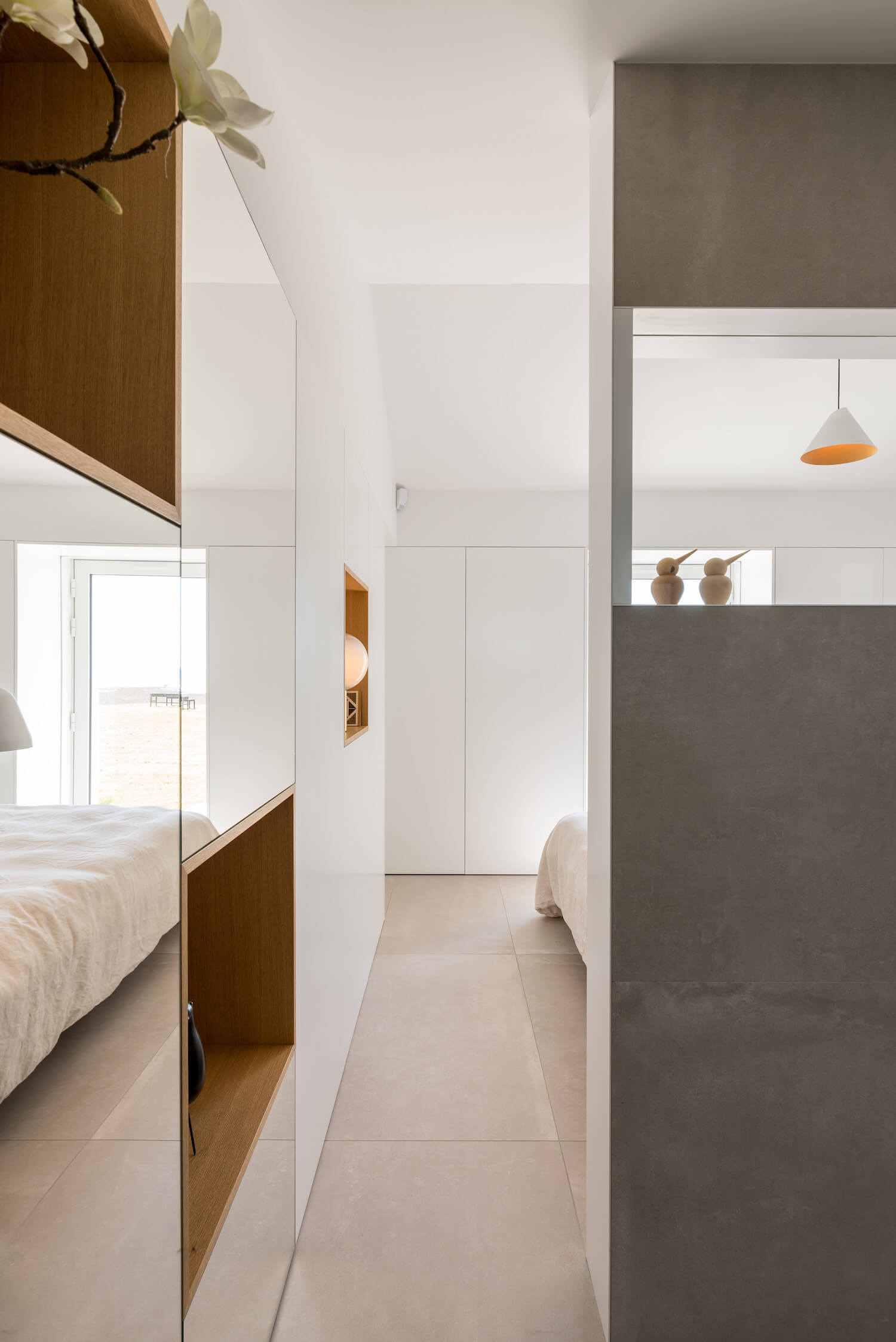 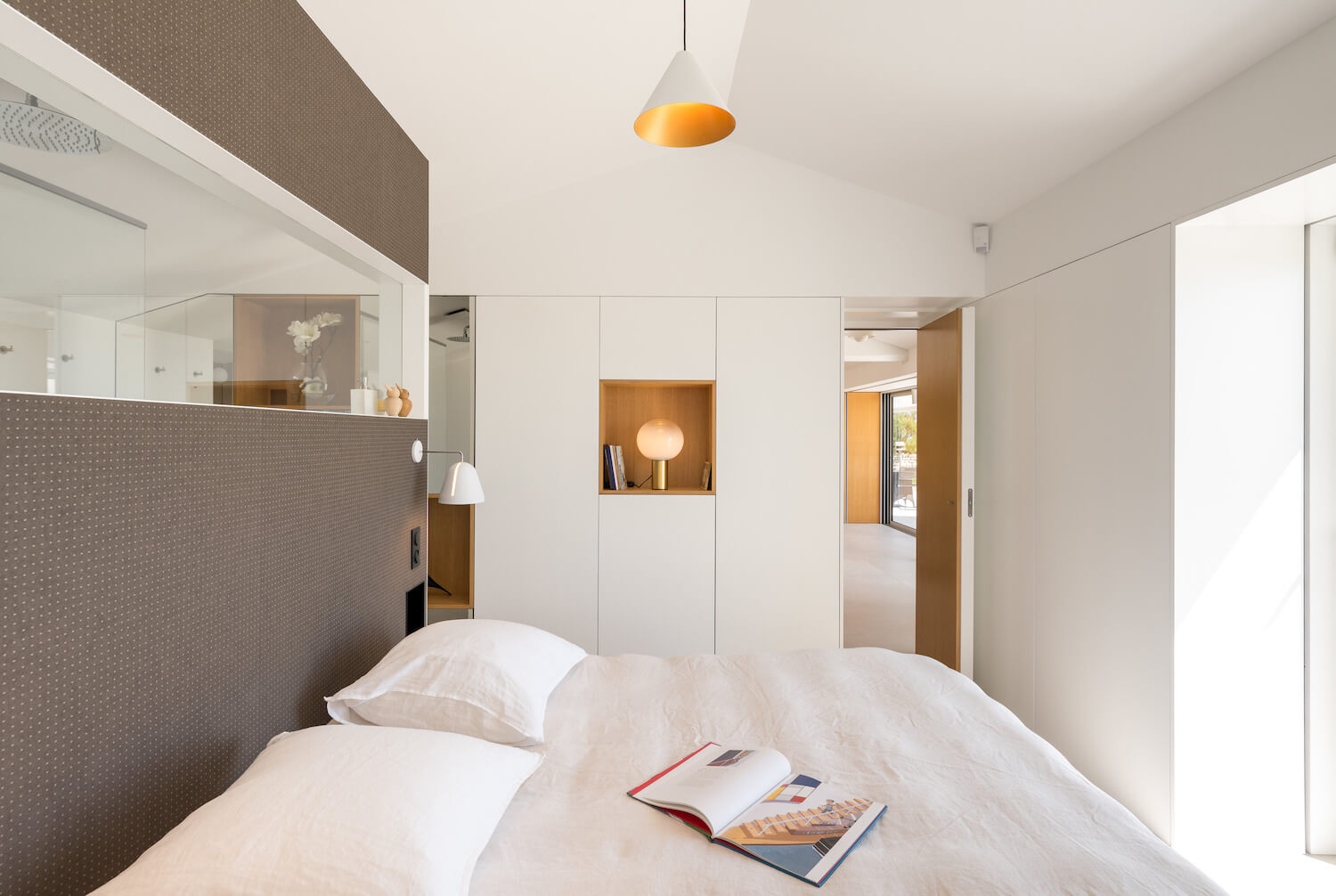 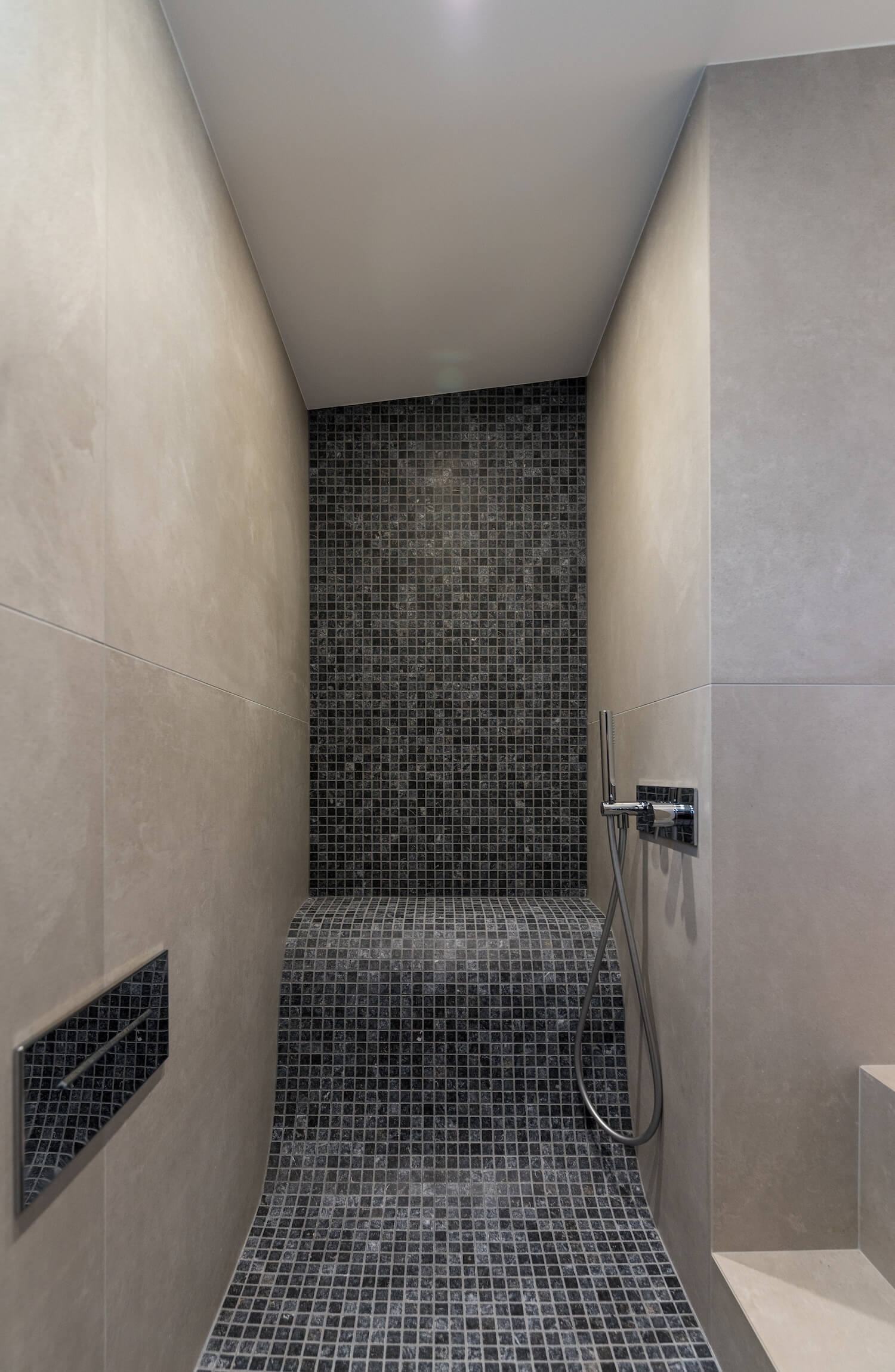 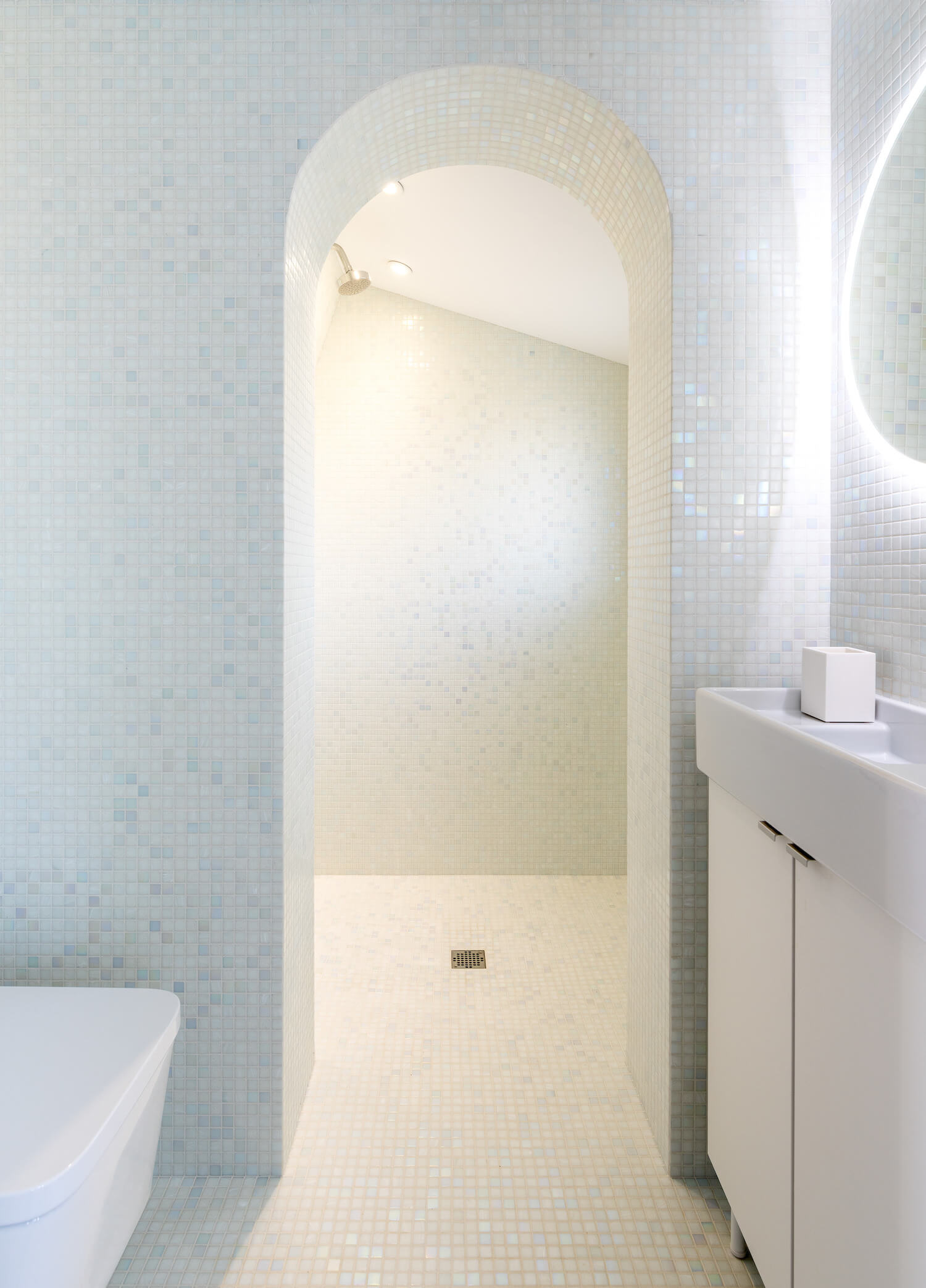 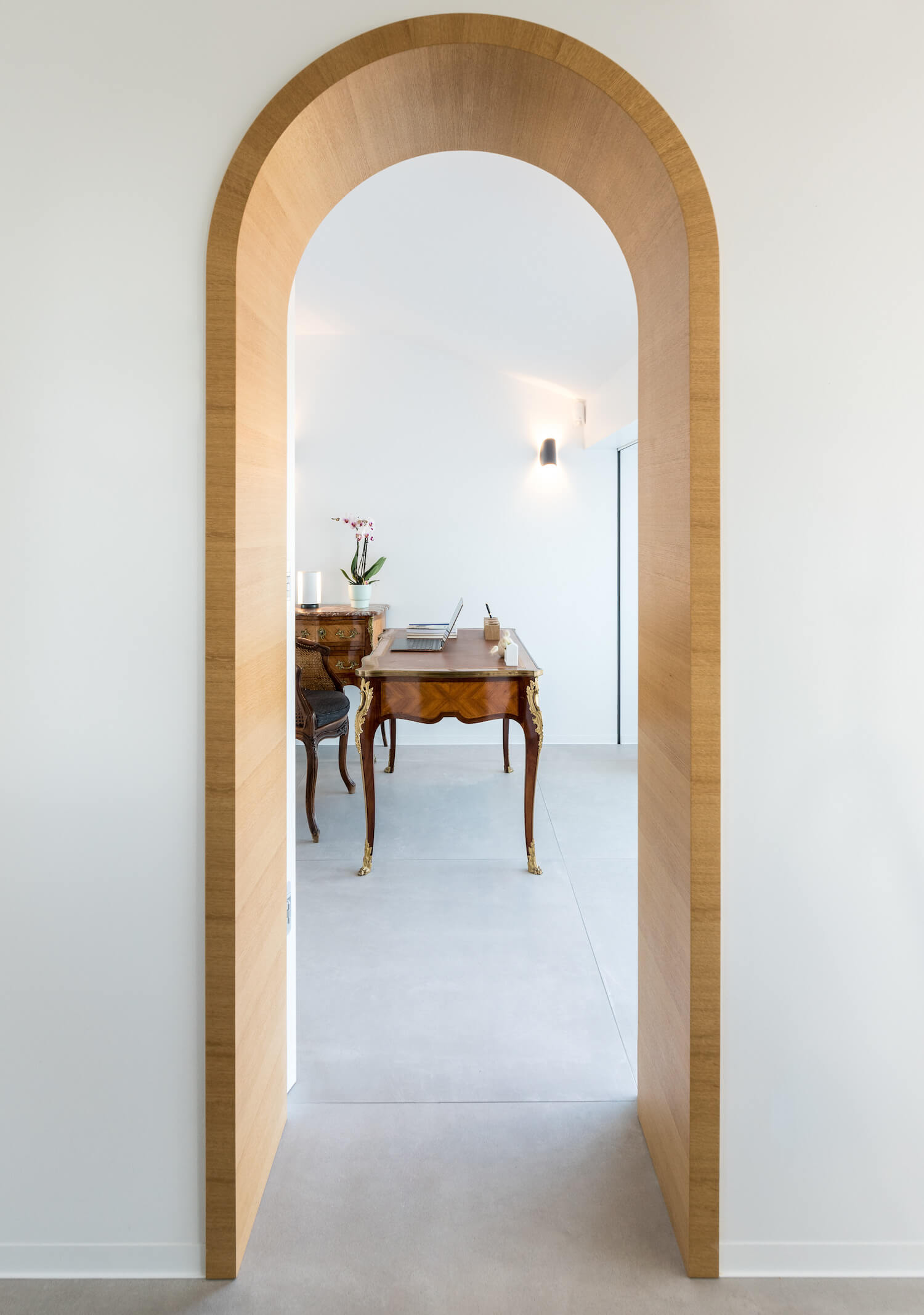 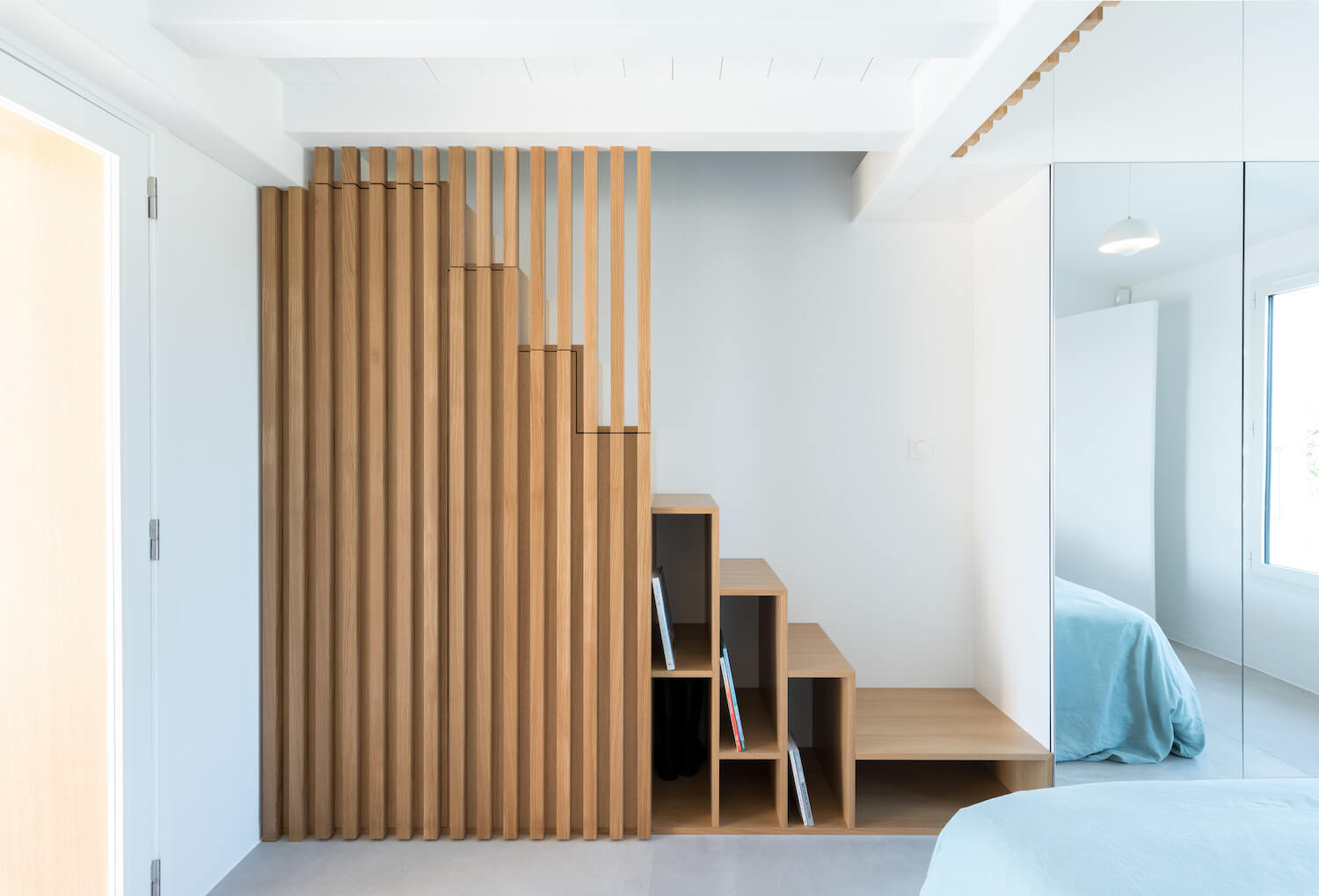 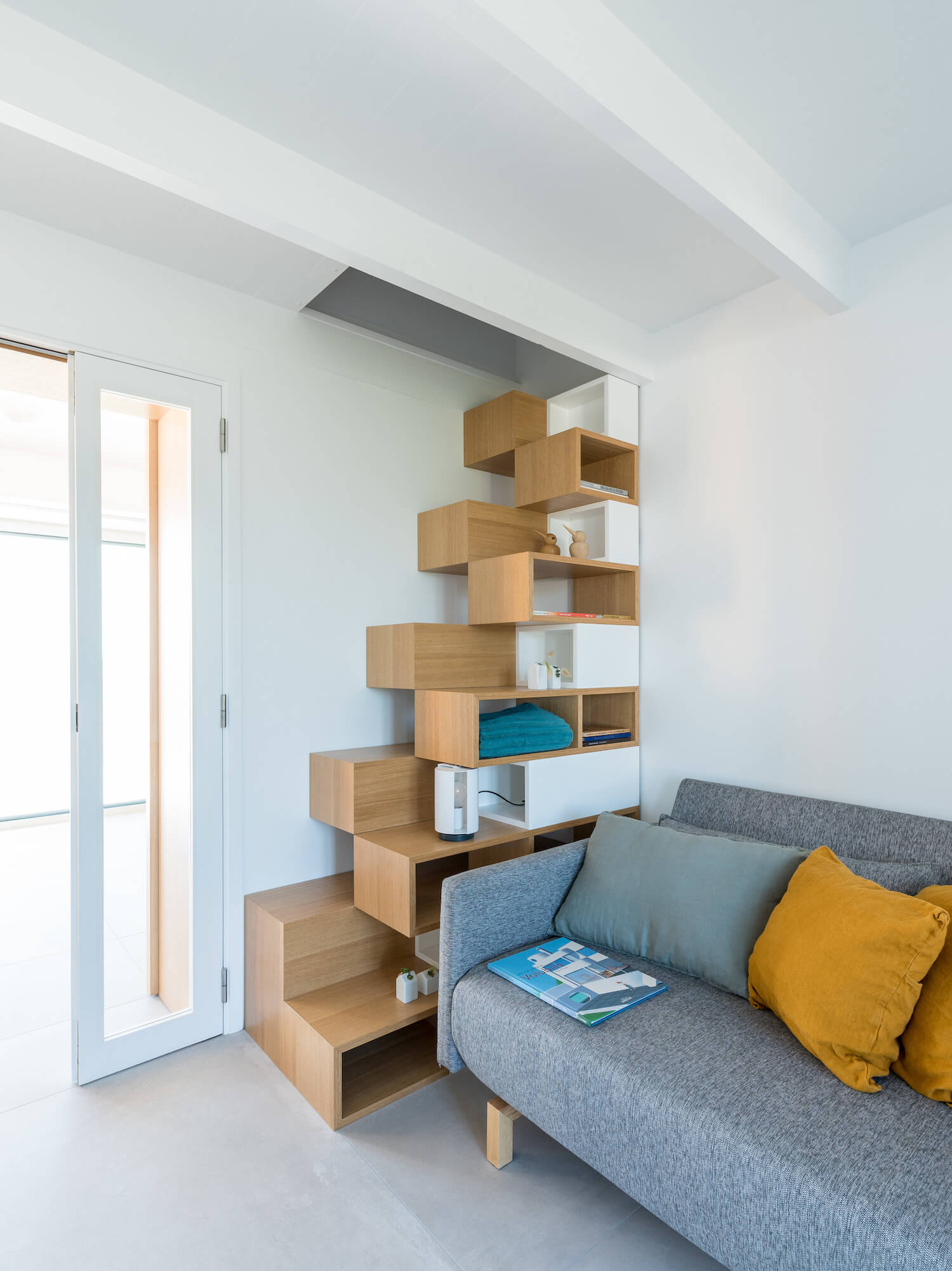 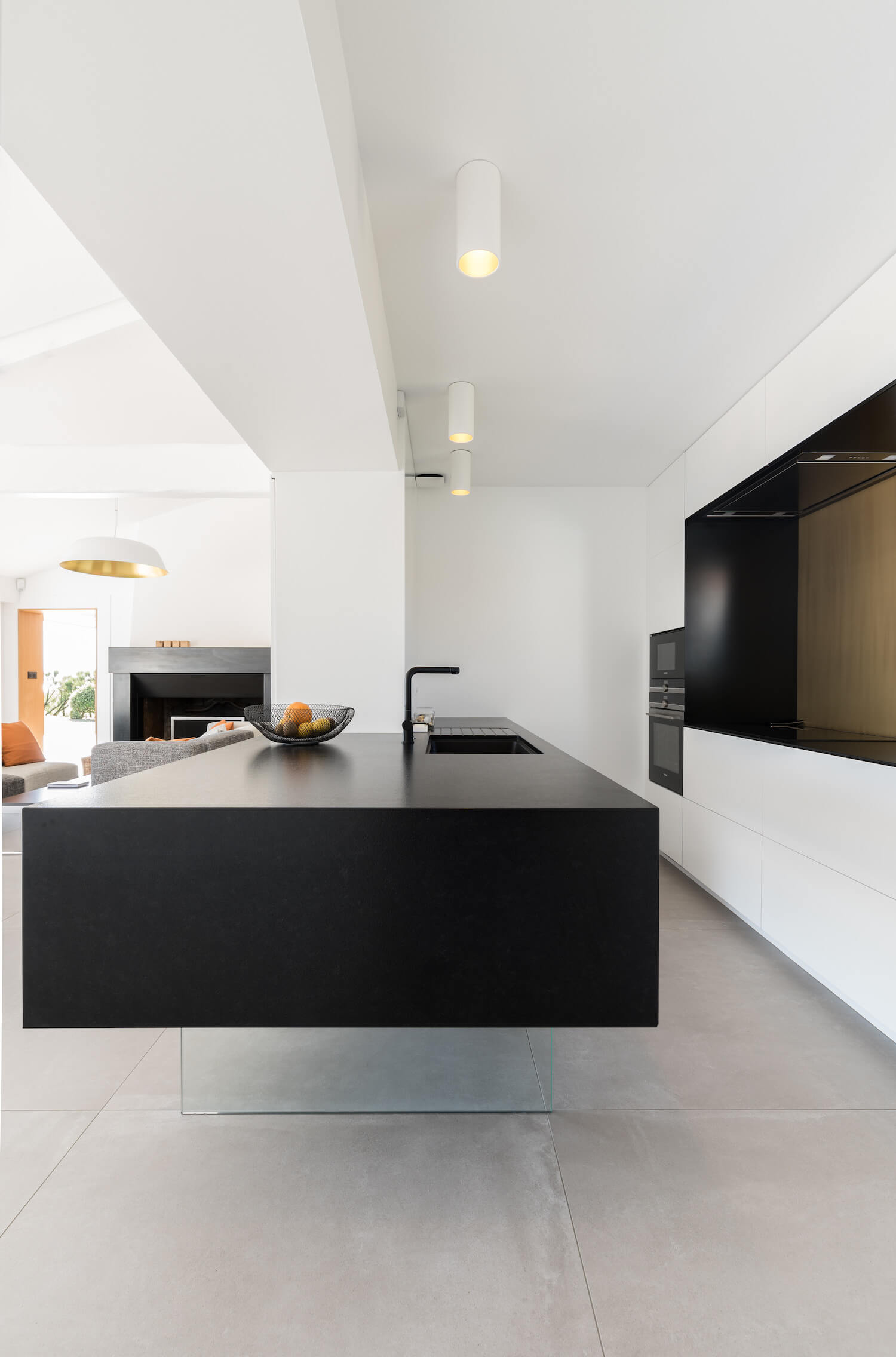 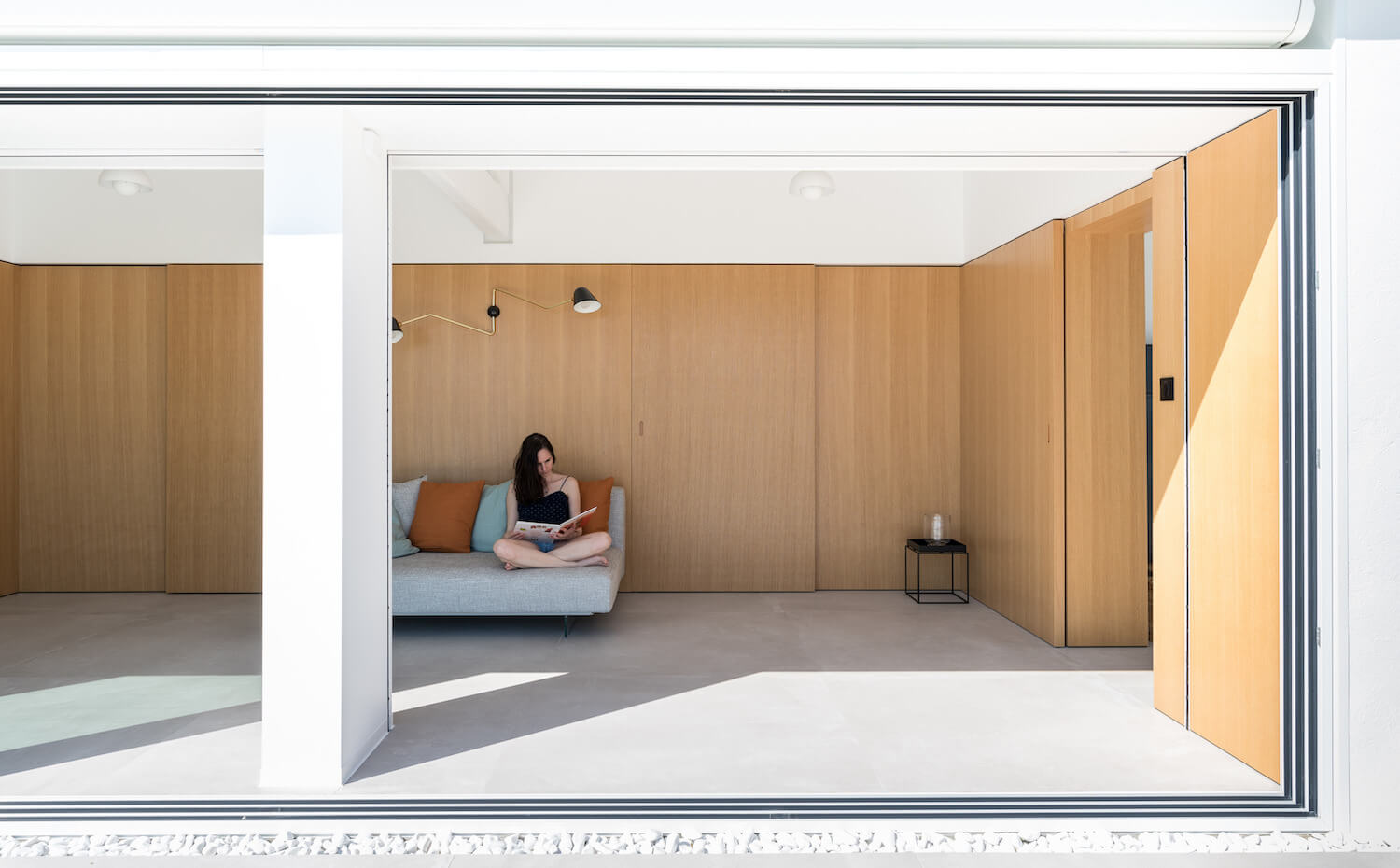 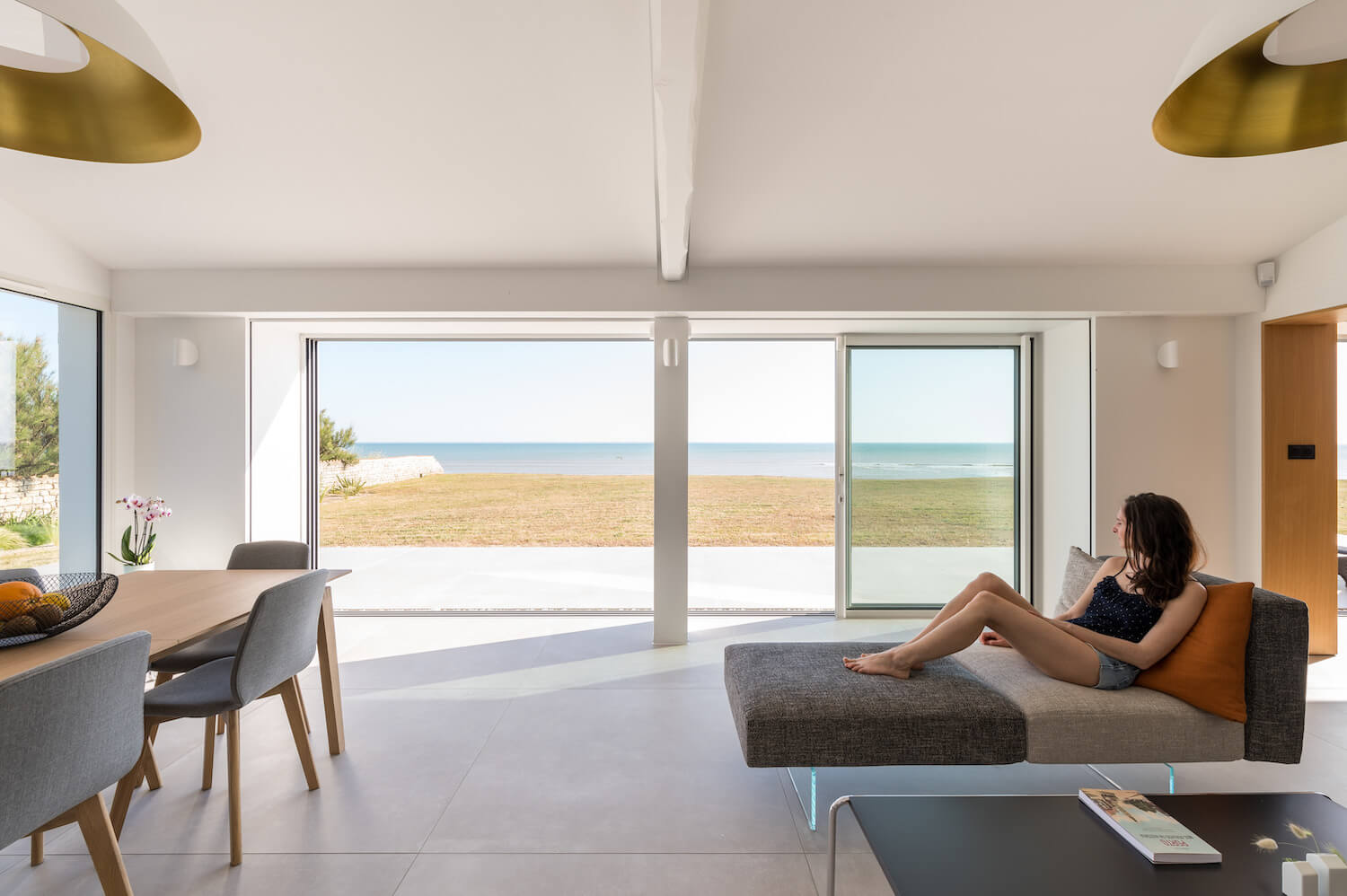 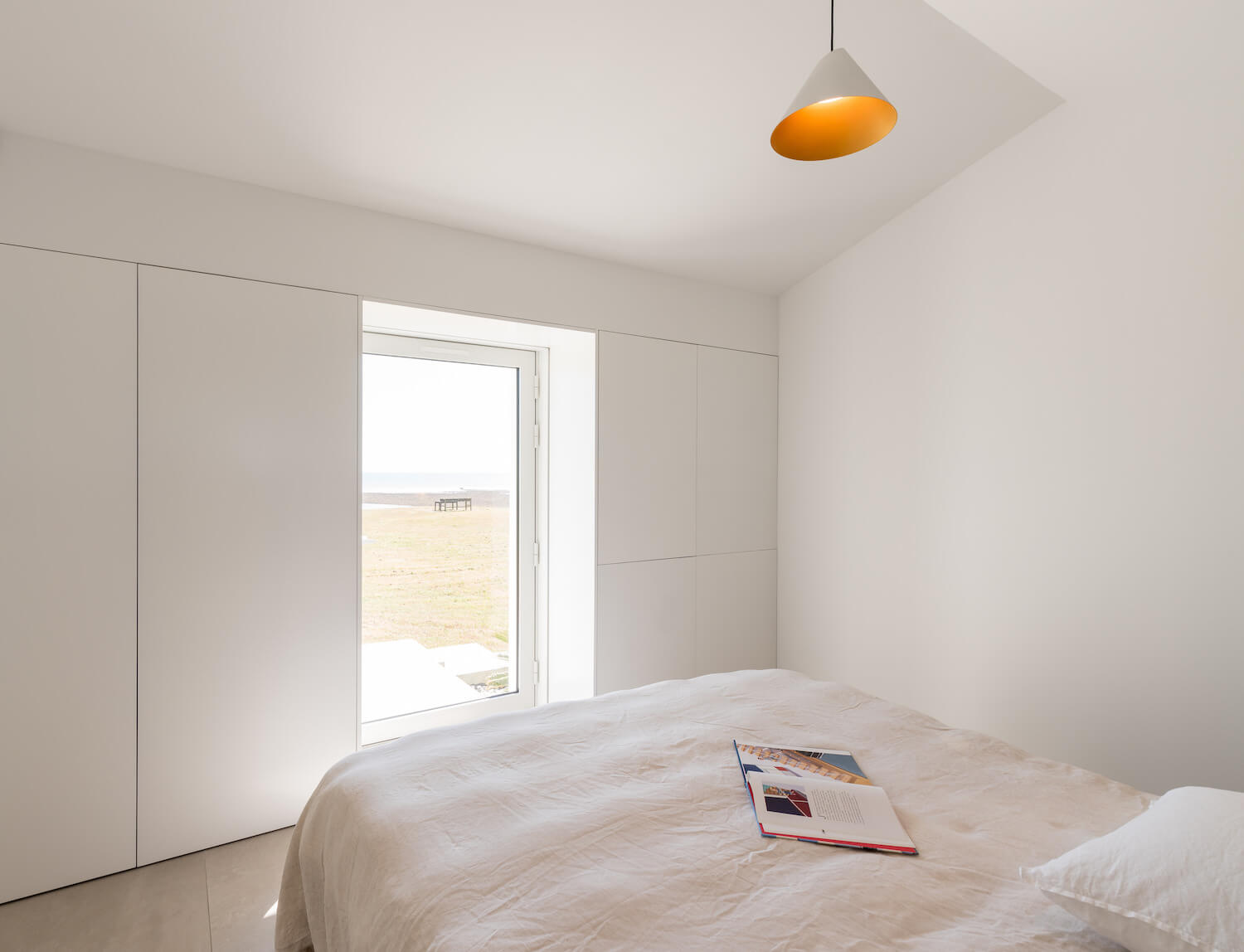 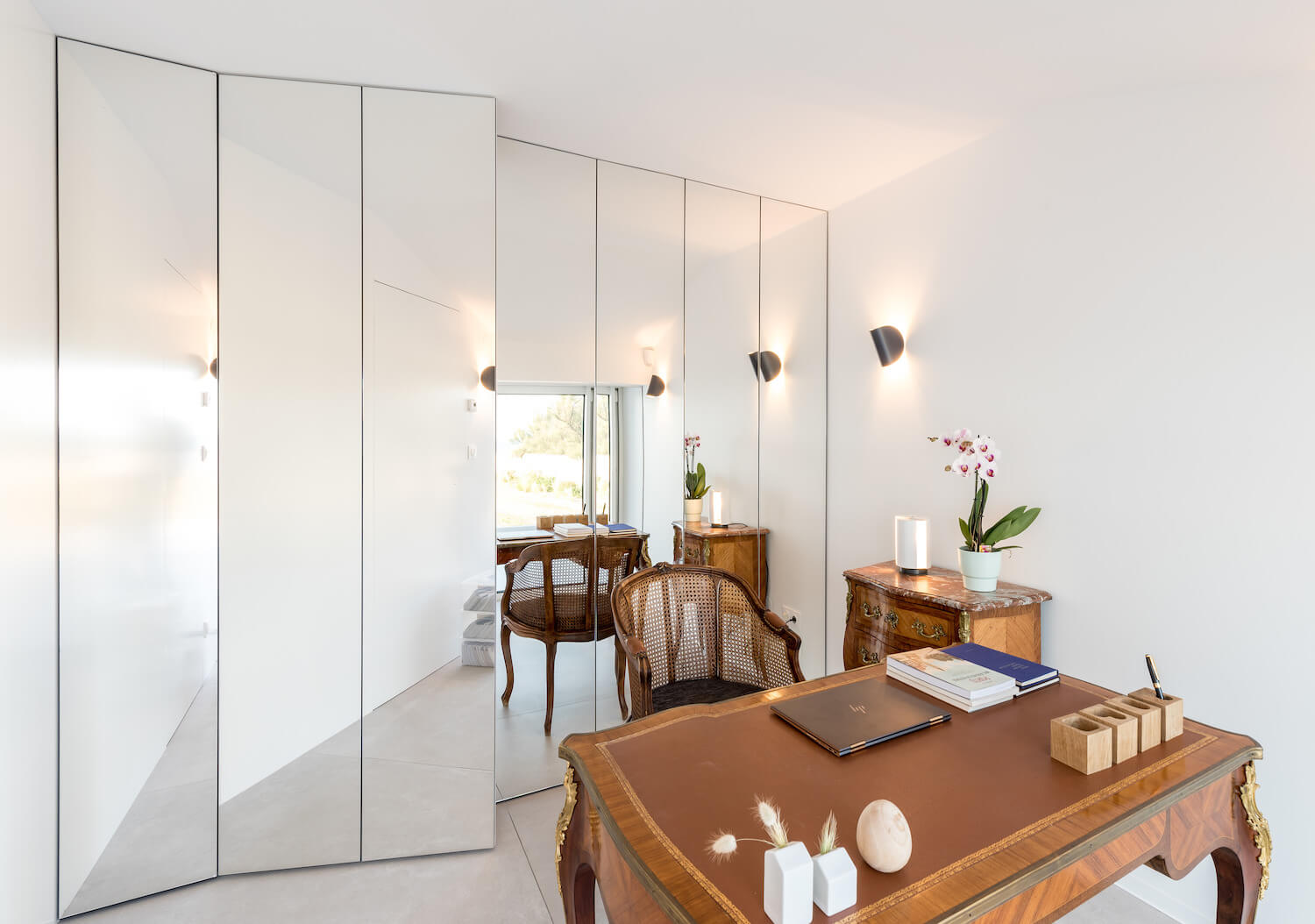 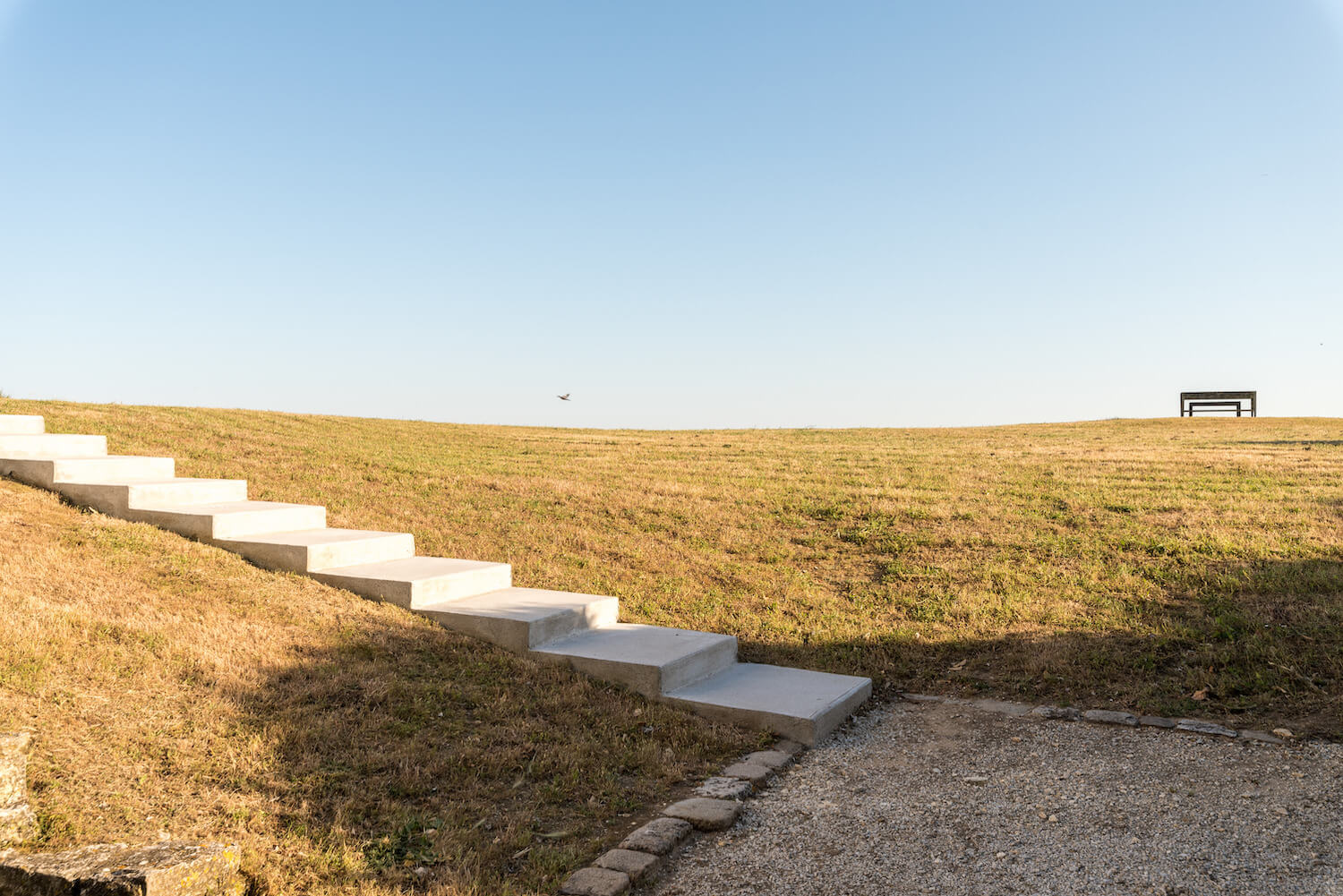 The workshop created by Mickaël Martins Afonso in 2016 is a reflection of a multidisciplinary career, cradled by studies of visual arts, applied arts, space design, and last but not least, architecture, thus encapsulating a journey rich in human and intellectual experiences.

The workshop works on different forms and scales of design, including interior design and furniture creation, leading to the realization of the object. A new project is meant to reflect on the practices, to release a global thought of the inhabited space, and to answer more precisely specific requests from each customer in order to create singular places tailored to their needs and desires, to each way of living the architecture.

In 2016, Mickaël Martins Afonso won the jury prize at the Festival des Architectures Vives de Montpellier, which led to an invitation to the Taipei Landscape Public Art Festival "Seeing the Unseen" exhibition, organized by the "Blue Dragon Art Company" in Taiwan, to present his award-winning project "Head in the Clouds."

In 2017, the workshop was invited to produce an architectural installation with the collective, SHALUMO, during the Concentrico 3 festival in Logroño, Spain. 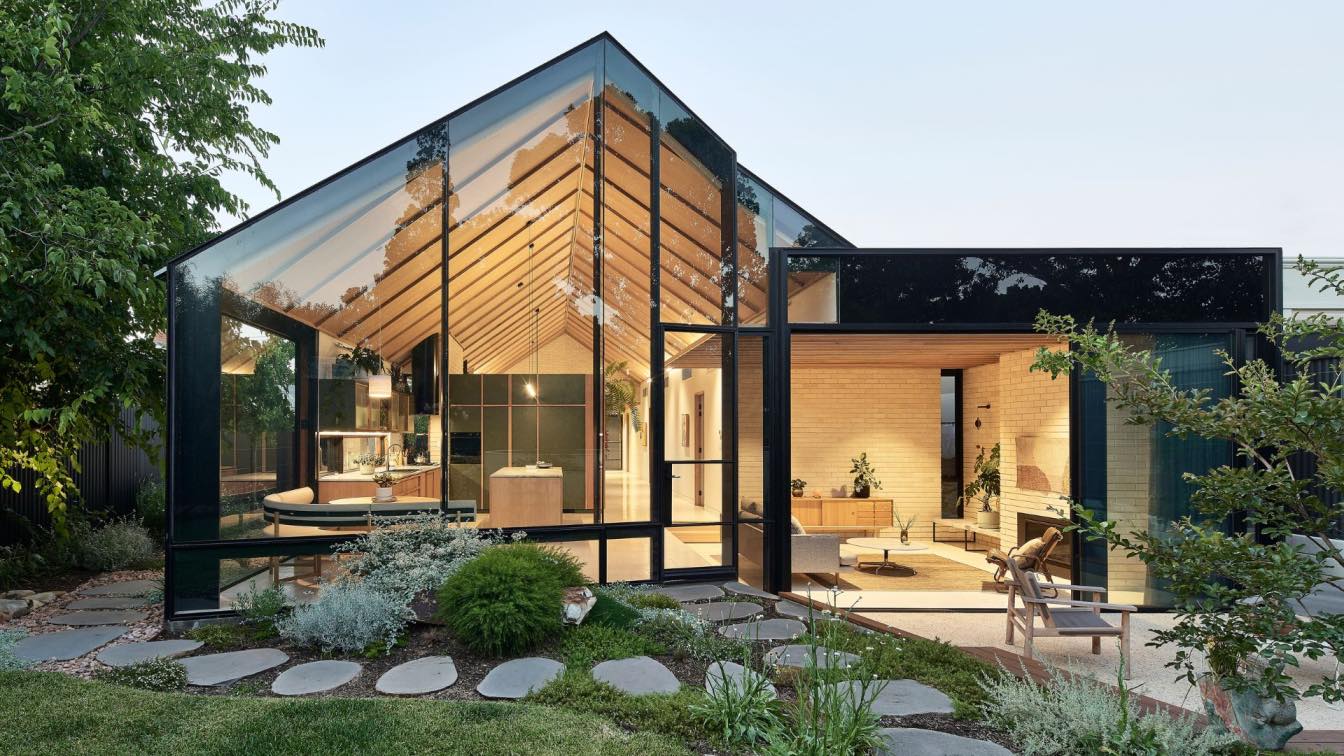 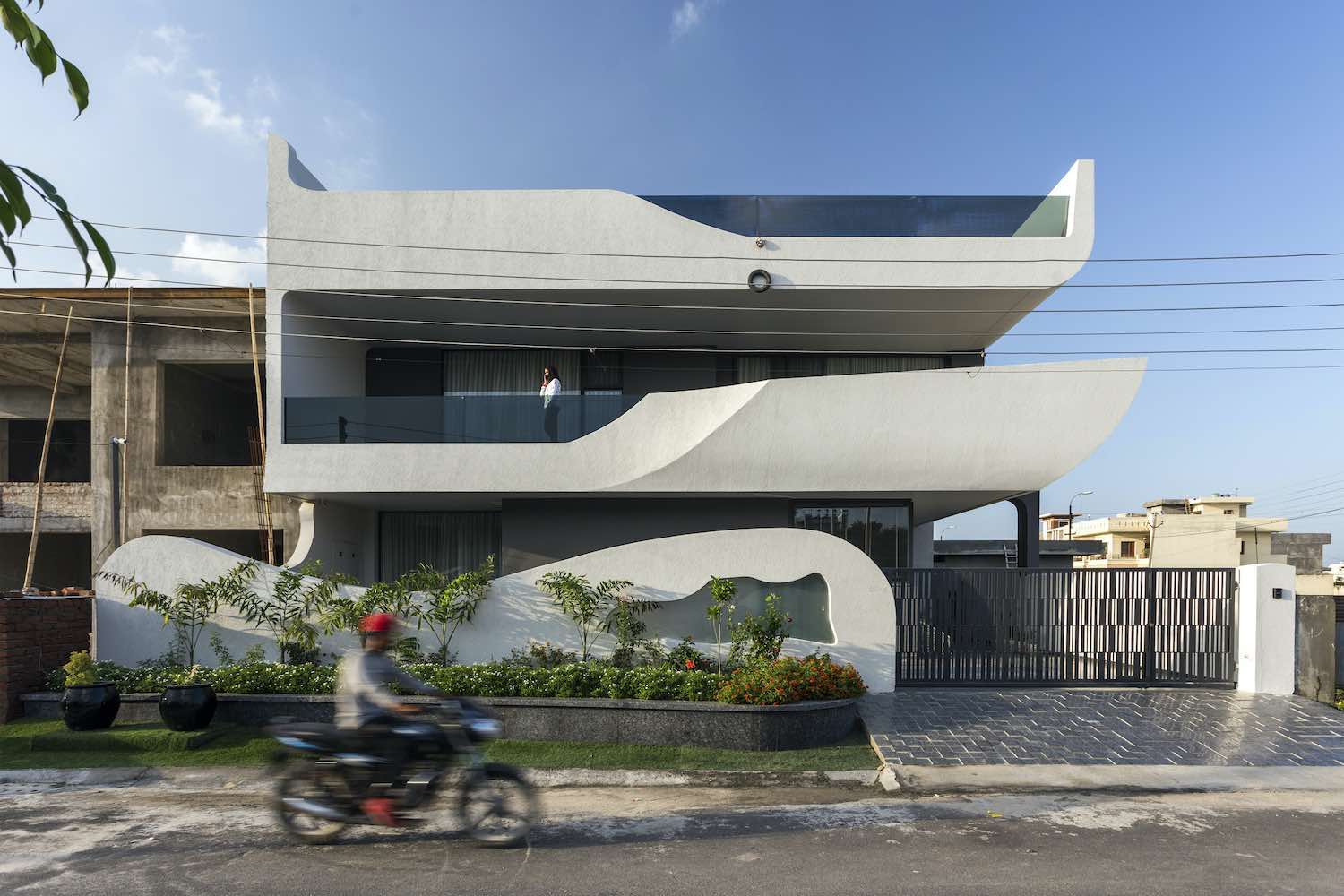 La Tabatière: Renovation of an old farm in Montagny-les-Monts, Switzerland by Noue Studio 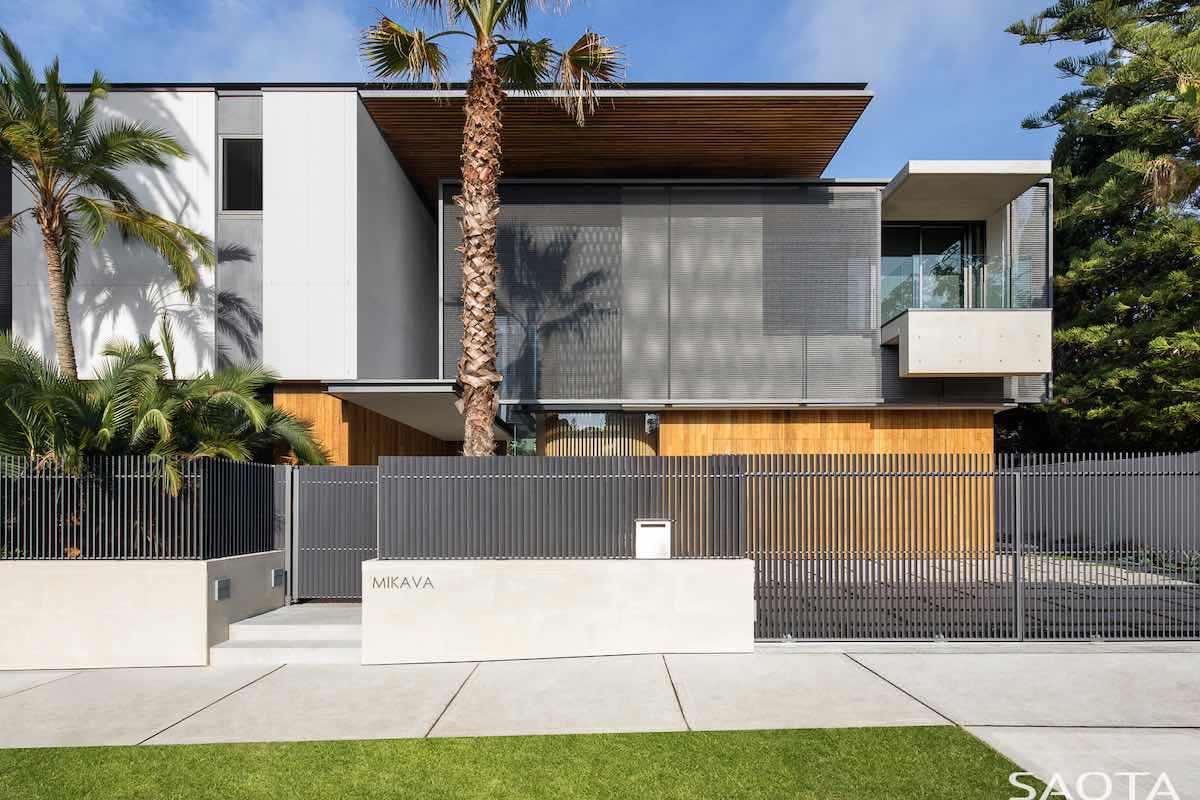