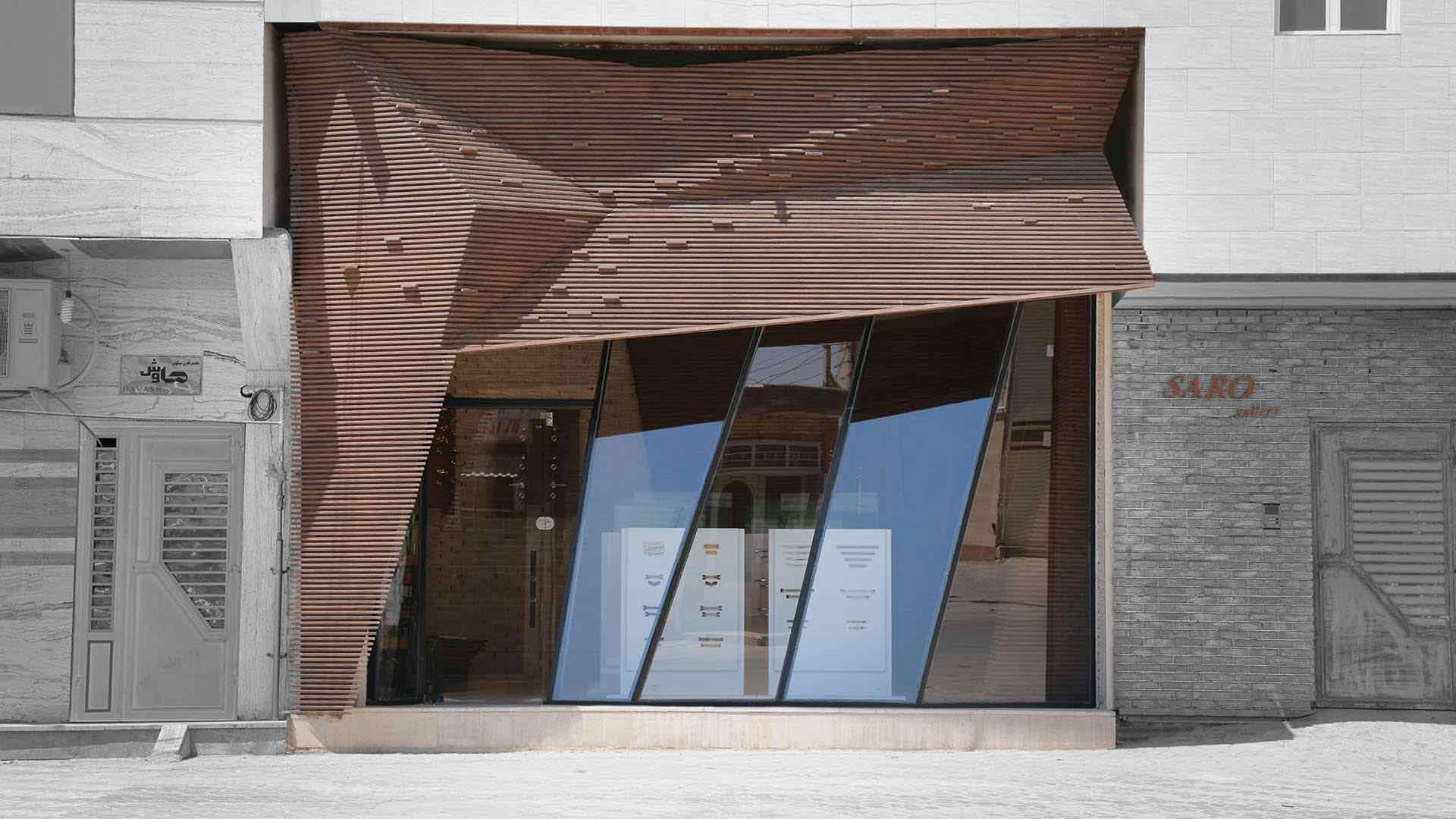 Saro Gallery, designed by Iranian architects Mehdi Qanavatti and Amin Qorbani, is a showroom space with an area of 35 m², located in the port city of Mahshahr in Iran.

The elementary process of formation: The reconstruction of a half-finished shop and turning it into a gallery of cabinets with an area of ​​35 square meters was a challenge to start. The purpose and the approach of this place is just "Chemo" and it is based on new special goods. Because it is near the store, the warehouse and the convenience store, and this brings about the ease of choosing how to easily choose customers. This gallery is located on the southern shrine of Imam in the city of Mahshahr port. Given the location of the project, which is located at the wood and MDF sales center of this city, we were faced with a challenge that we could create an idea for design that would first provide a response for a small space, as well as create a coordination with the urban texture of the project. And besides, we can create a quality wood industry in the interior and exterior of the project. 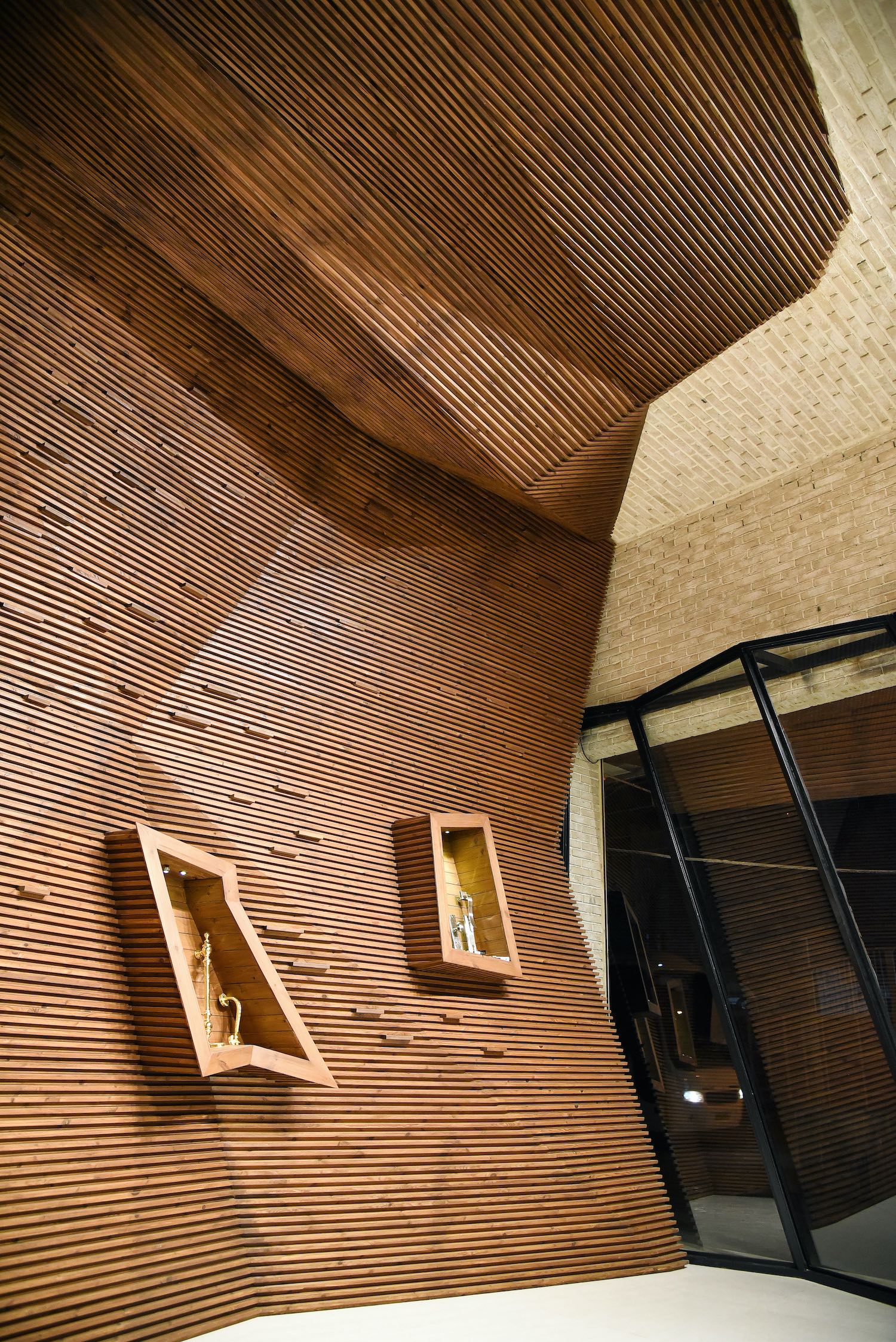 Relationship of space with climate (dual): Another goal of the project was to connect with the specific city of the city where the project is located. Considering that the city of Mahshahr port has a special duality of sea and desert status, we chose materials from the Thermo-wood and brick according to the climate and urban texture, taking into account the duality of the form. So that the wood represents the sandy desert and the calmness and simplicity of the bricks, it is a clear sea-water connection. The form was designed in a way in line with modern texture and traditional texture. So that everything that the Thermo-wood shell was intended to adhere to be a modern texture, and a brick that was chosen as a rustic rostrum was considered for traditional space. In addition, in order to better understand this dichotomy in the modern part, we created the form in a relatively rough line against a simple, relaxing texture so that this duality can be better seen and create customers' minds and minds by creating challenging questions. It engages itself and makes it easier to understand and communicate with your surroundings. 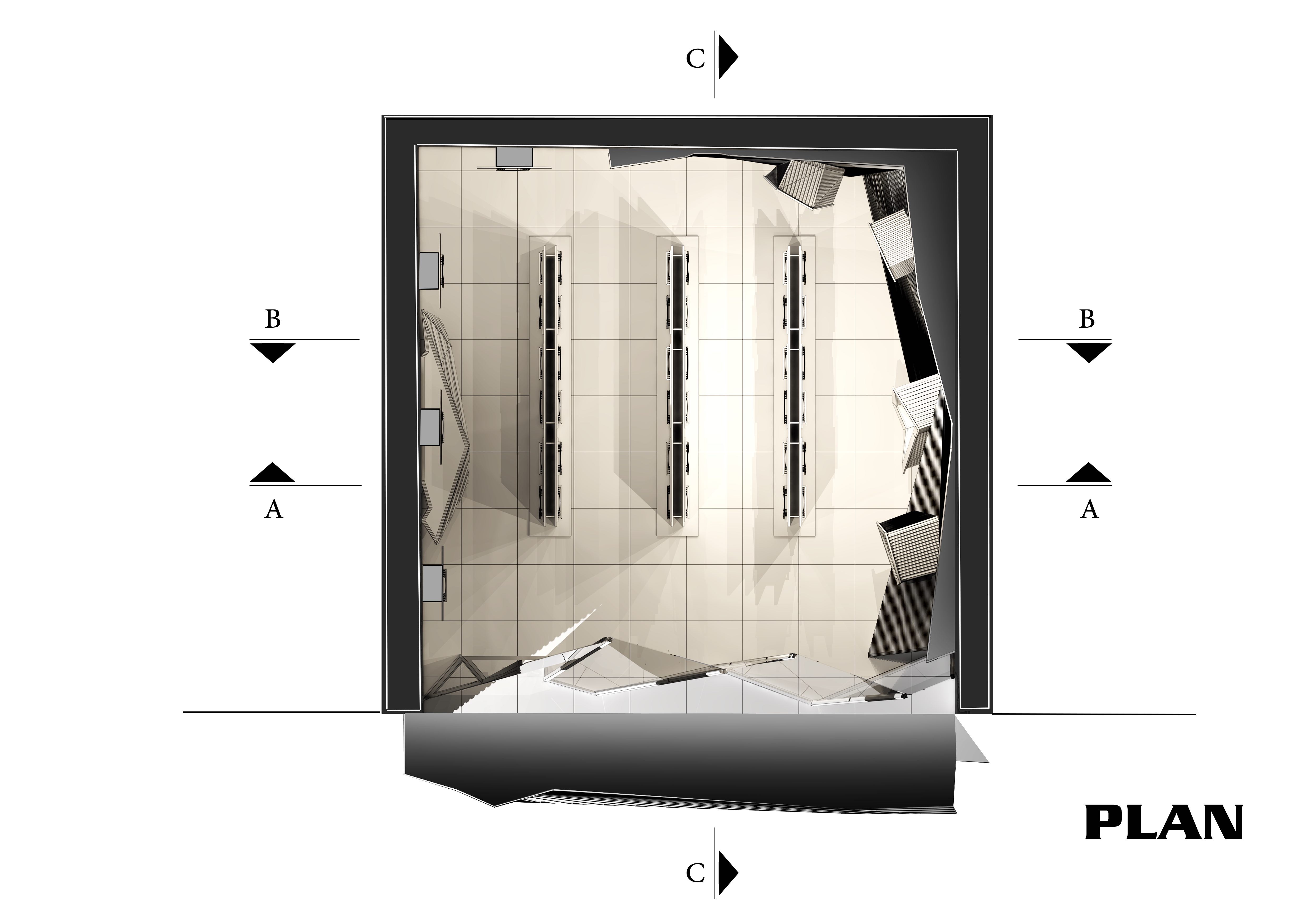 Reach the final design: In the formation of a three-dimensional diagram of the design, we first encountered a useful half-floor with a height of about 2.2 m. Due to the status of the diagram, the design space should solve the problems of the existing situation. In the first step, it was decided to demolish the half-storey of the store, in addition to raising its height from the ground, creating a much larger space and more human-looking atmosphere. In order to better see the size and shape of the modern part of the building, the Thermo-wood stick has definitely become a standard 10 cm depth to two 5 and 3 cm pieces. Then these new pieces were placed on top of each other, starting with the first row of 3 cm and then 5 cm respectively, on each other on a structure with geometric shapes made of the parts of the reinforcement and plaster and Robbits. The other side of the building was covered with a very simple form with bricks, some of which were rigged out randomly. As a result, the bricks and thermo-woods were covered with walls and stretched to the part of the ceiling that came to each other. The exterior of the building was also covered by a pattern from the interior design with the same dual-size and double-element elements of the same materials as the Thermo-wood brick and the brick, so that the connection between the building and the inside of it was induced. 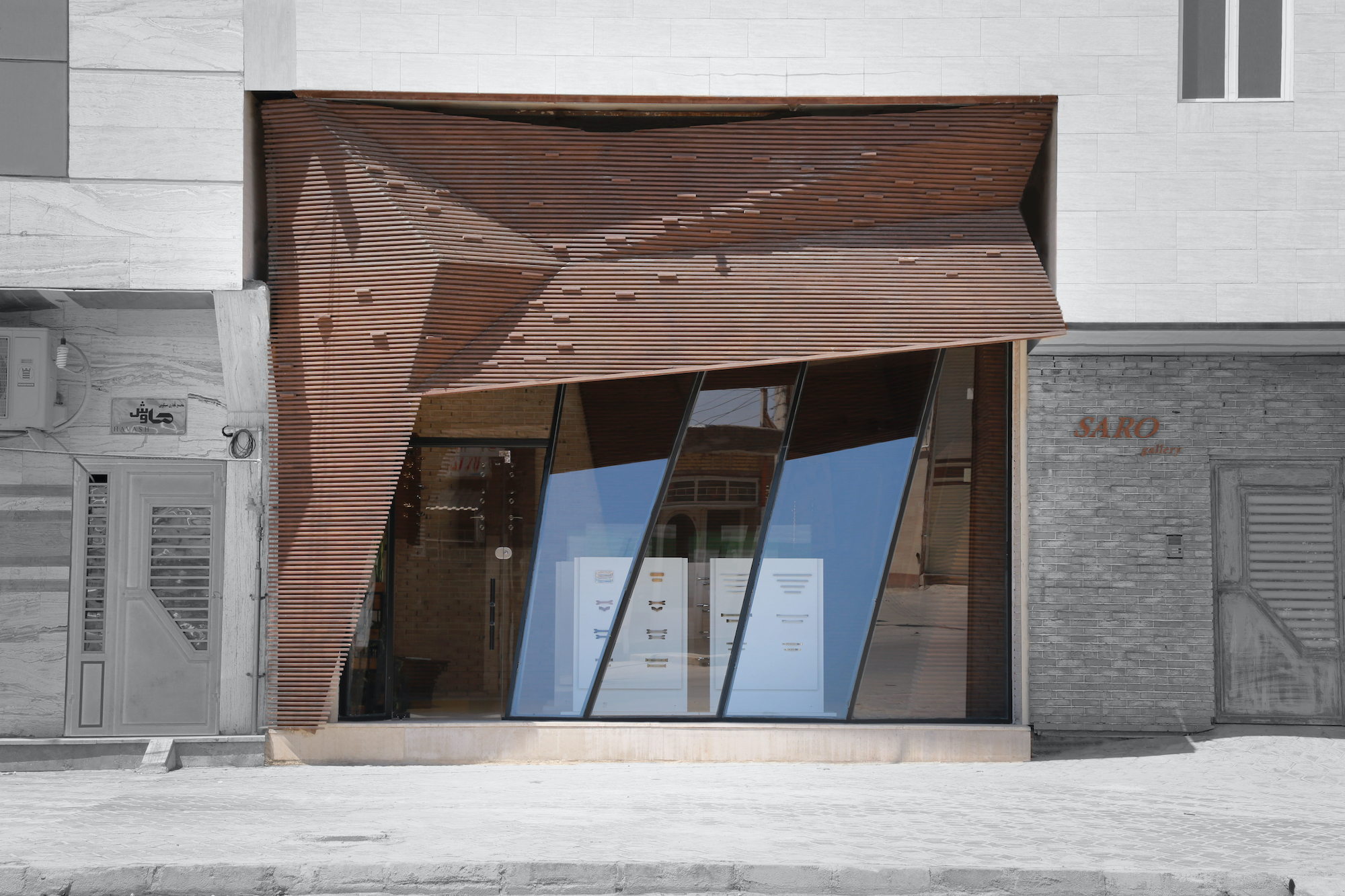 The challenge of the glass (glass dance); the main problem: In designing this space, the main issue was the design of the project to create a visionary diversity in a limited space with the preservation of integrity outside and inside. One of these factors is the individual's position on the project to understand the building. Hence, the most challenging stages of the project were the formation of the glass based on the nature of the formation of the shape and broken lines of the modern part of the building. Where, due to the lack of flexibility of the glass, the process of shaping and constructing it seriously limited us. Because of the lack of glass flexibility, there were not many options for implementing the glass form. After reviewing the executive choices, selecting cans to contain and form forms was the best and most effective solution. Thus, the main structure of the forms was the choice of 8x4 cans, which, through the expansion on the floor of the ground, provided a downward force and, at the top, by means of connecting and interconnecting the forces of the above. By installing the glass after the long process of implementing the forms, the "glass dance" was named for the reflection and failure of light at different times of the day. 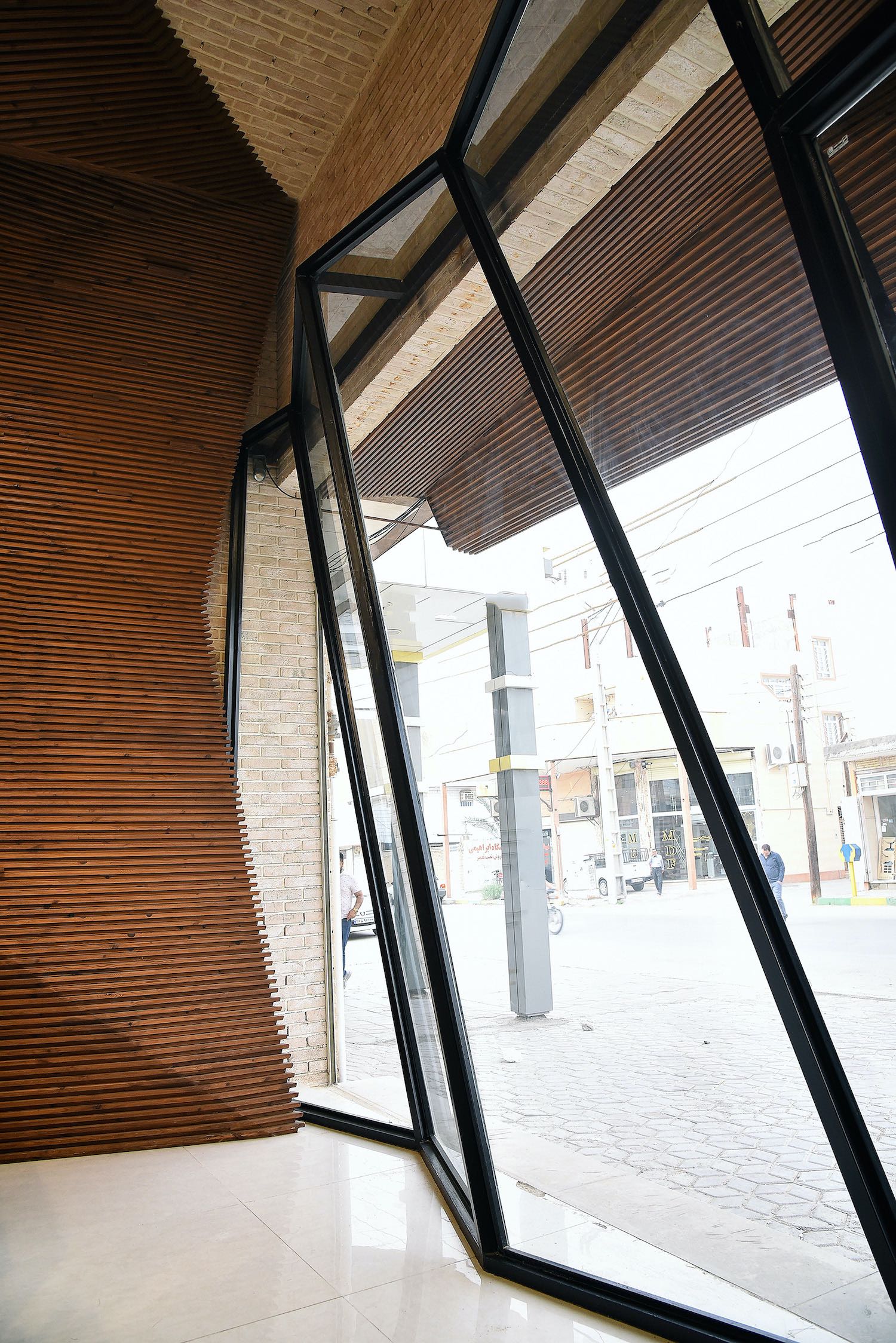 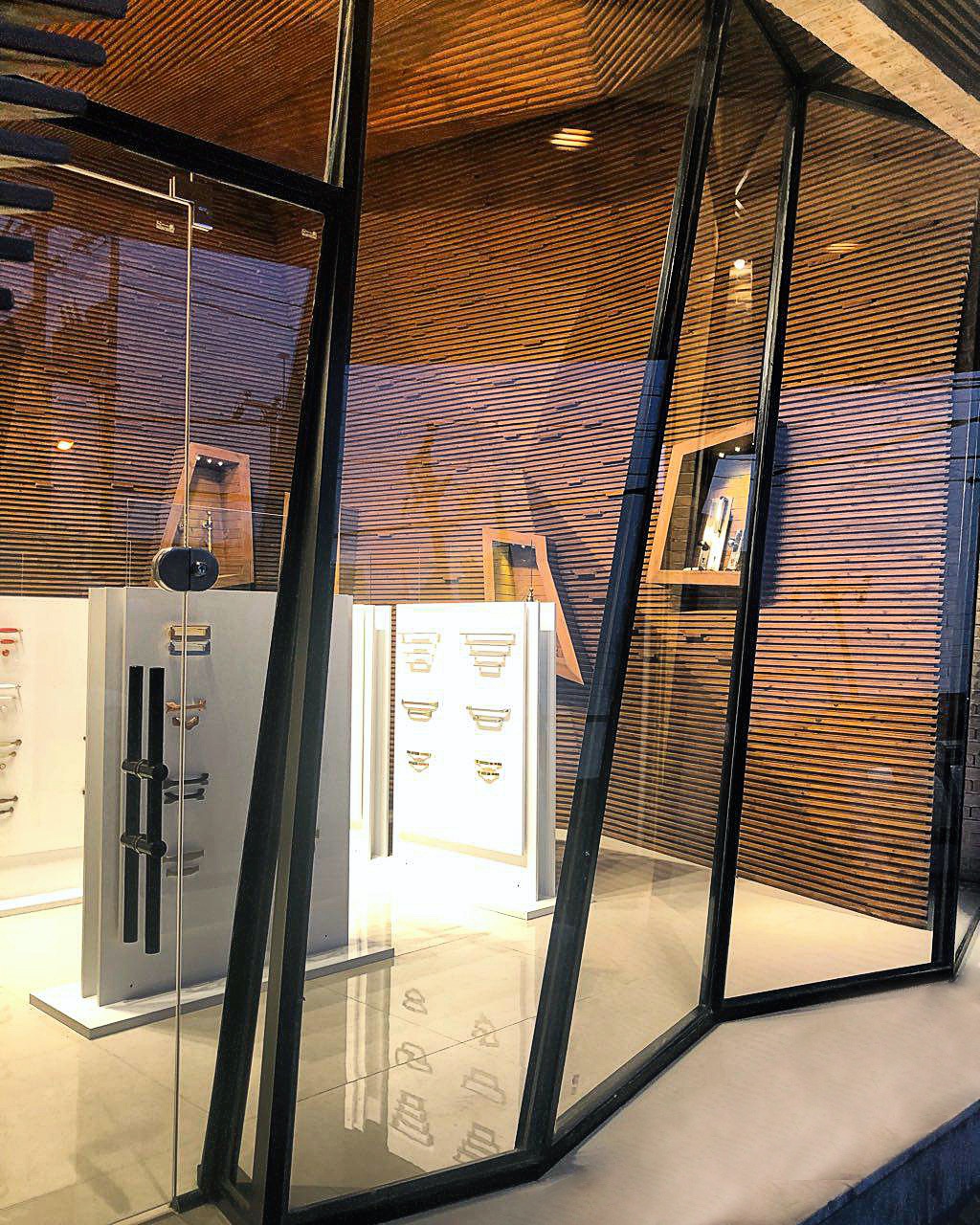 1) The integrity of the whole and other parts of the walls, the ceiling, the lighting outside and inside the design with the integration of traditional materials that represent the identity of the Iranian architecture and the modern materials Thermo-wood Timber, which identifies the location of the project in the center of wood sales and its connection with the site.

2) It attempts to connect this store with its urban texture, which is the sales center and supplier of the wood industry in the city where the project is located.

3) The use of duality and integration of wood and brick materials based on the duality of a particular marine and desert climate in the city of the project location.

4) Avoiding the use of various materials in the project space and creating an integrated identity. 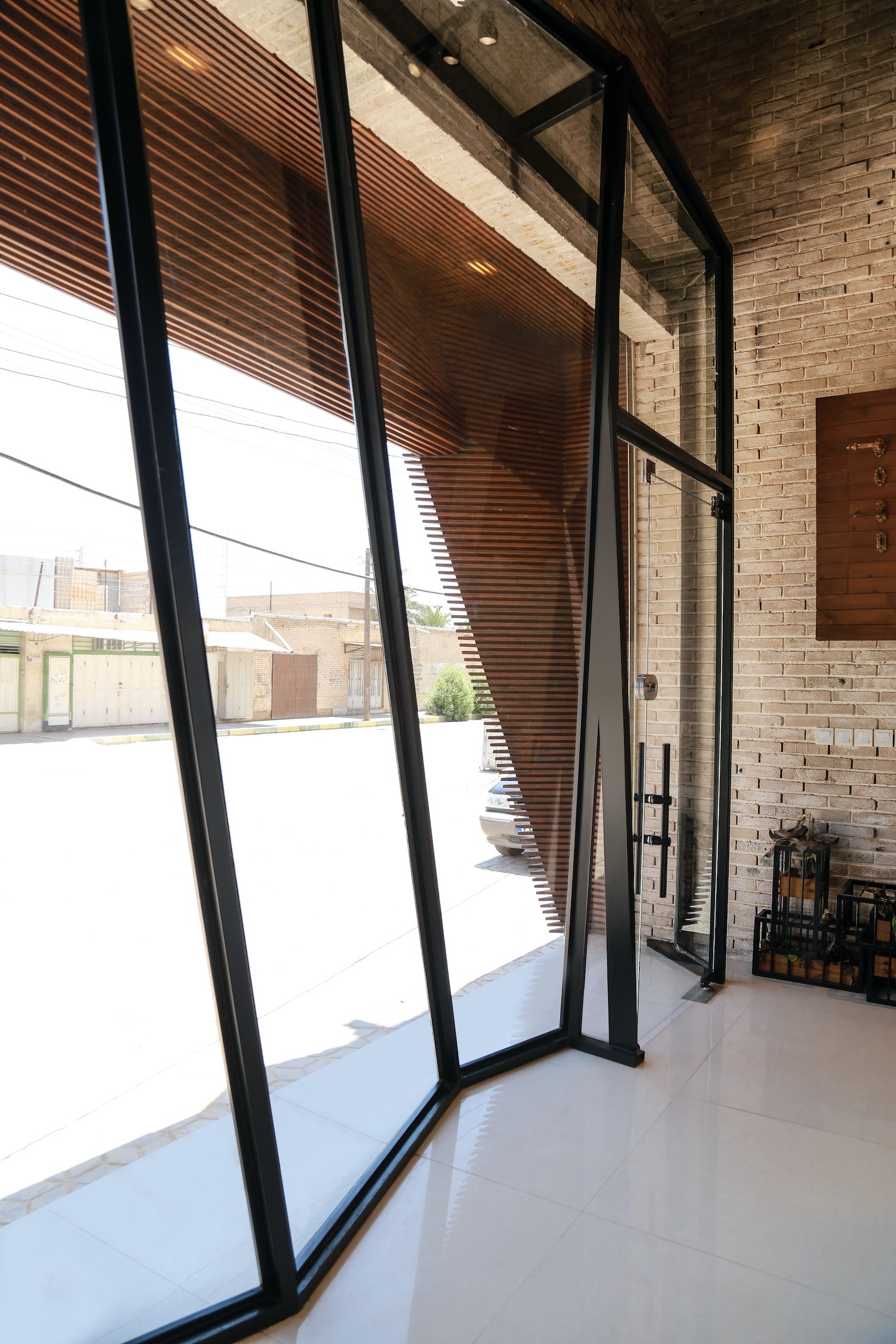 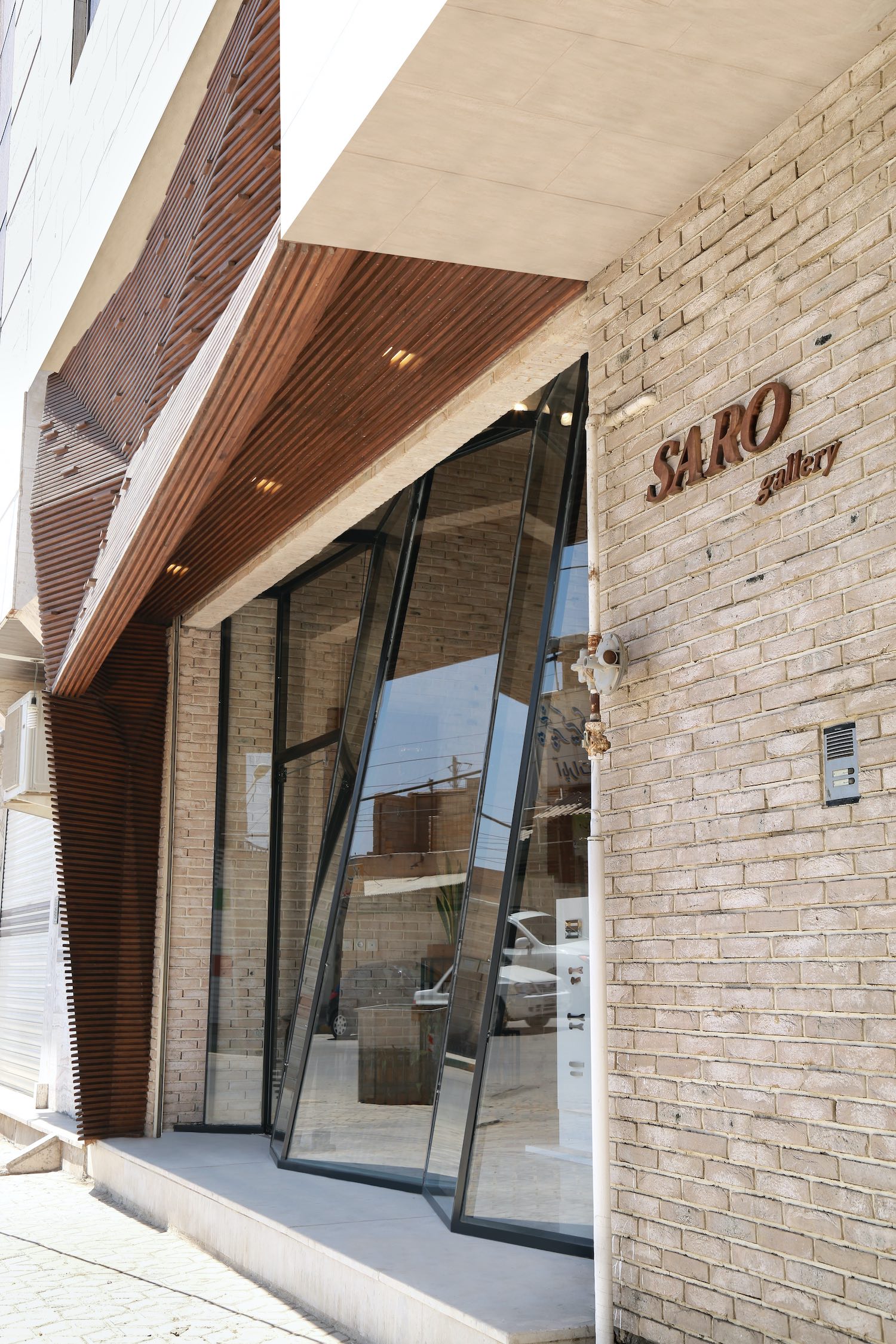 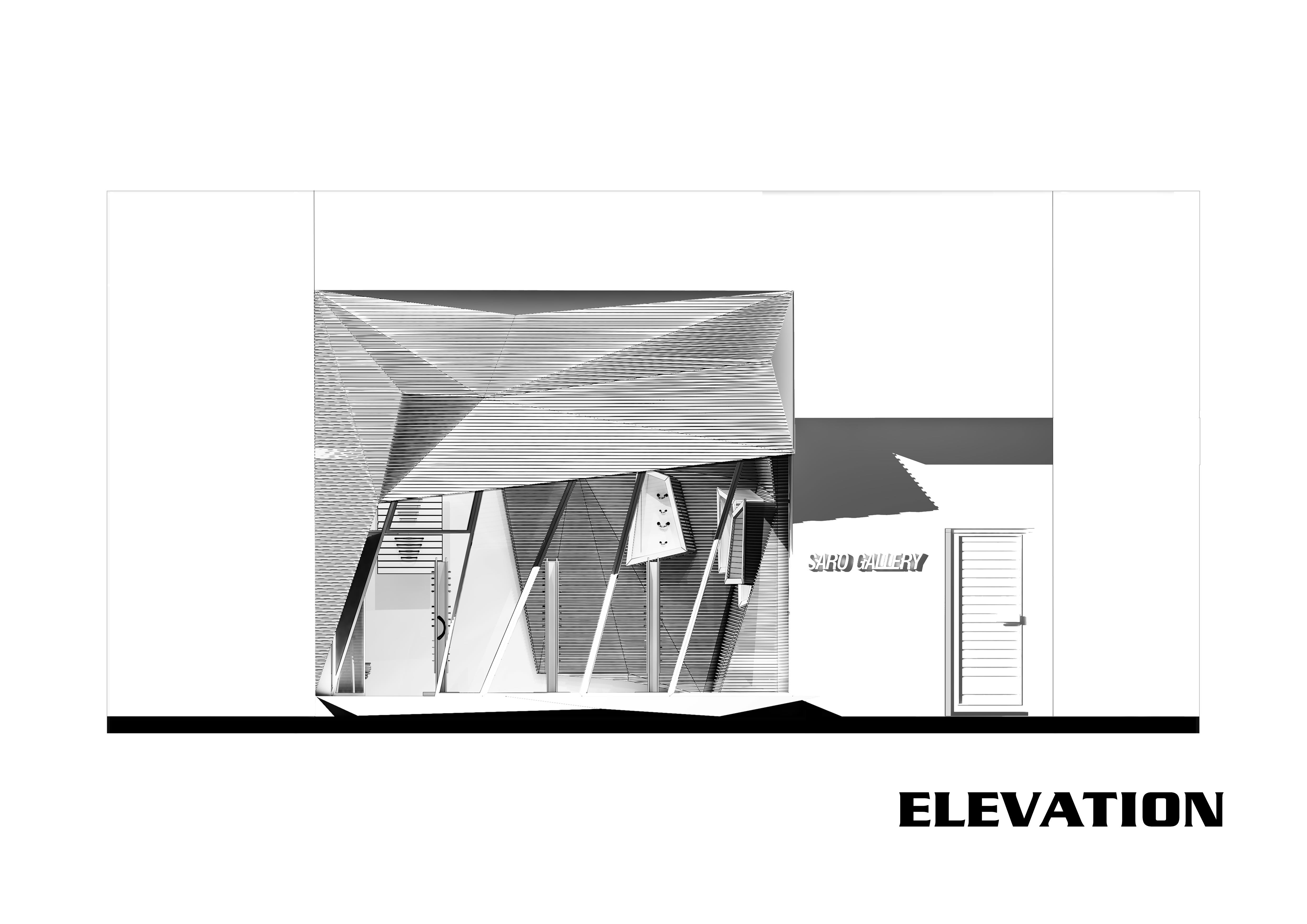 Photography: The Triple A Group 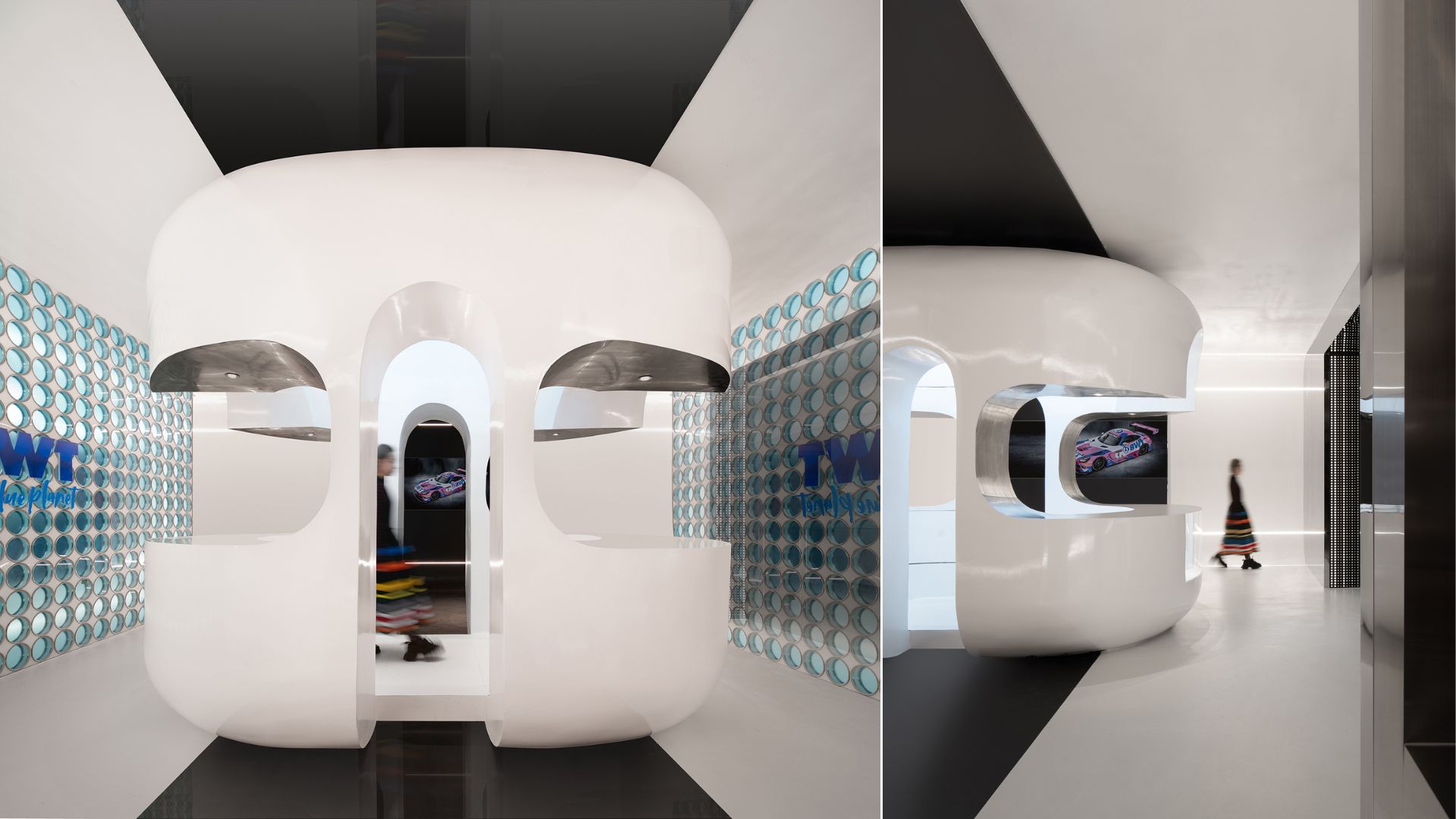 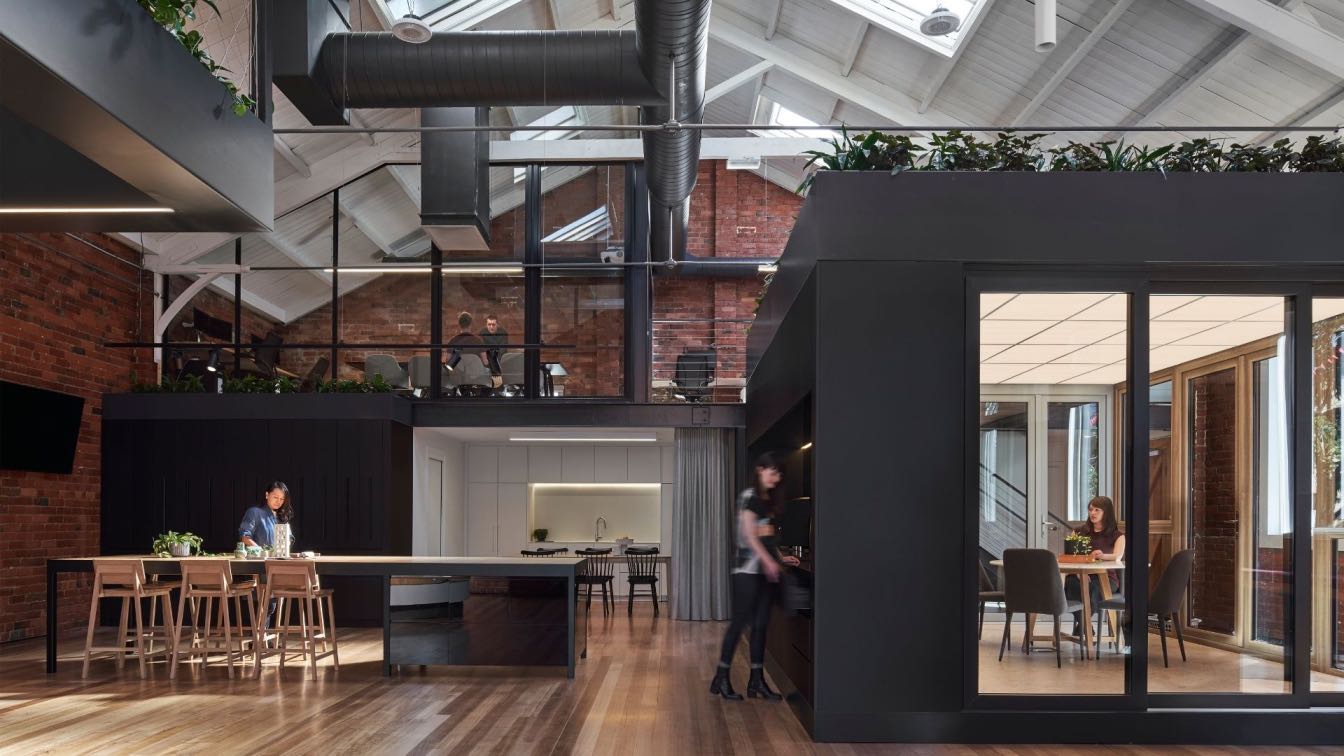 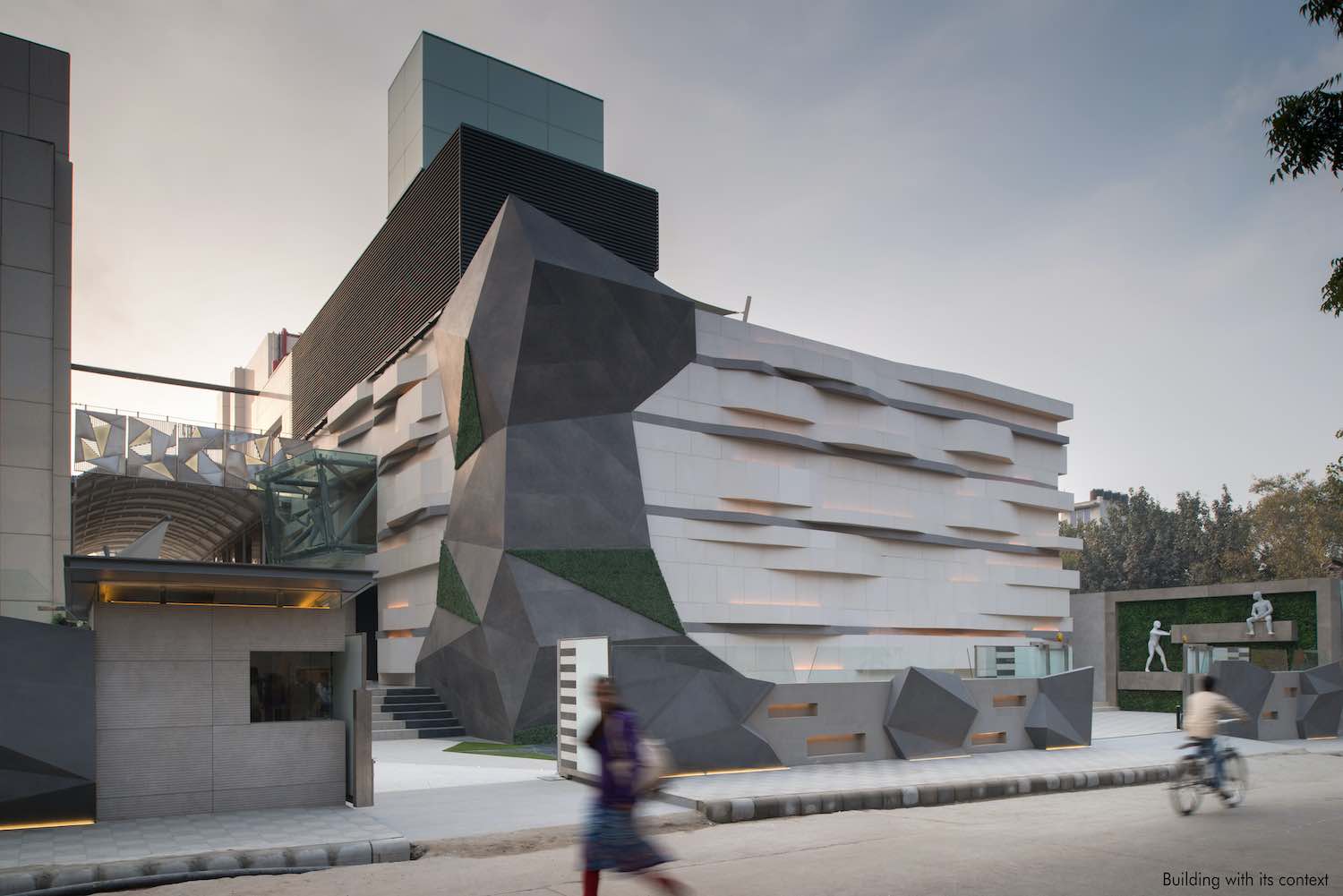 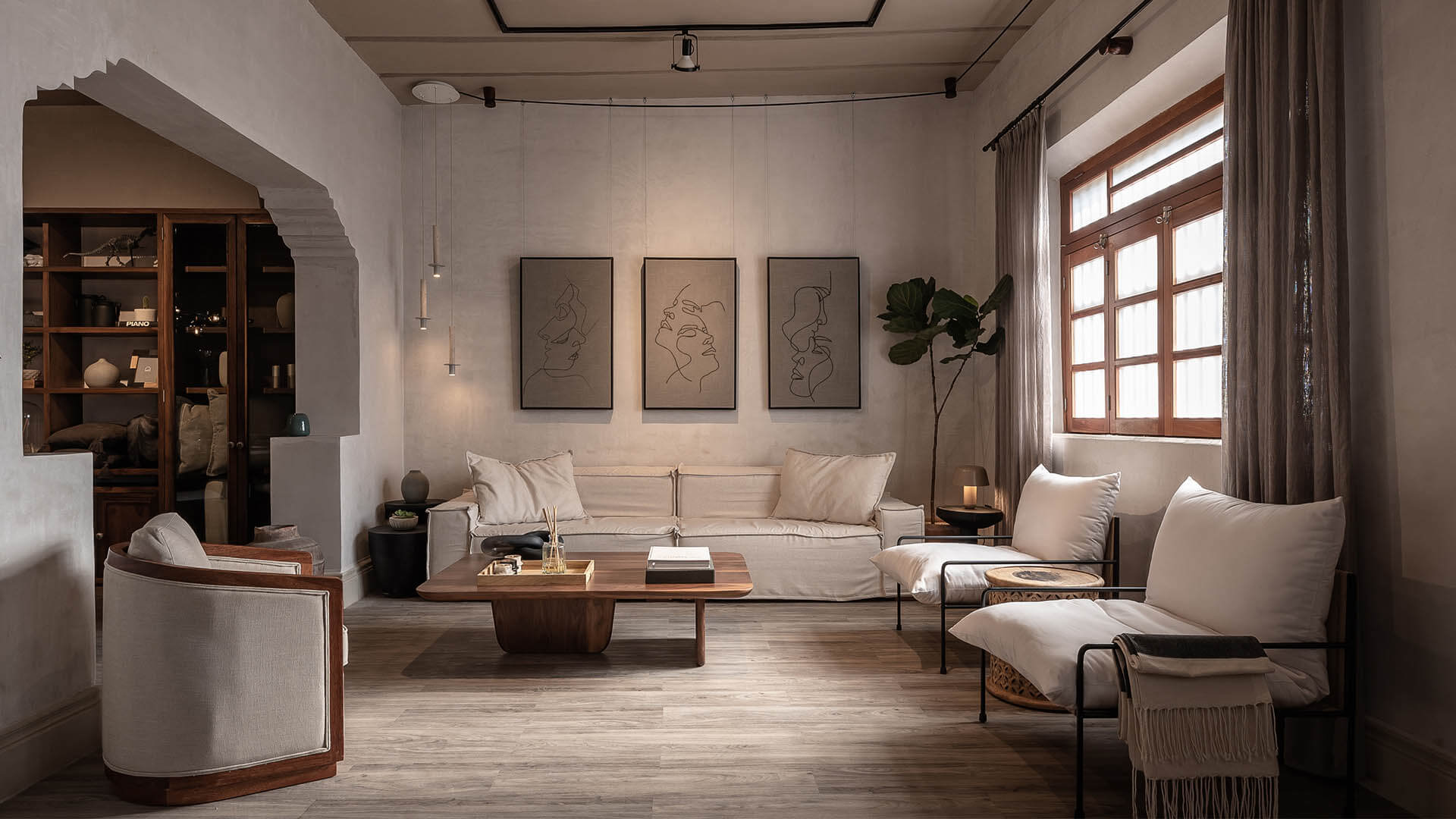