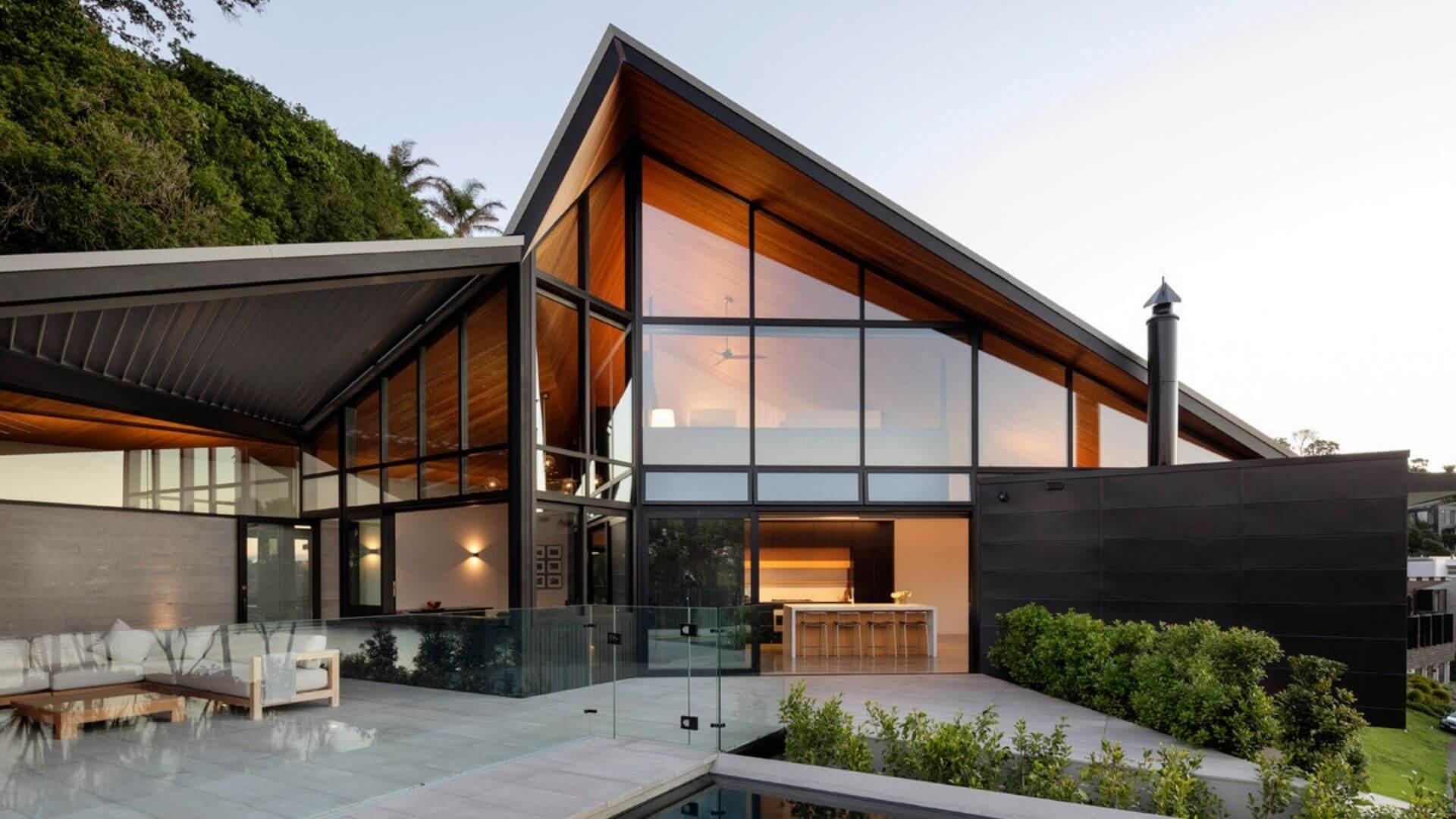 Situated on the slopes of the Orakei Basin in central Auckland, the site—which lies at the end of nearly a half-kilometre of challenging driveway that winds around another 12 properties and sits on the steep slope of a volcanic crater—had every difficulty you could imagine but it is spectacular, sheltered and central,” says Architect Wendy Shacklock.

While the site threw every difficulty at her, Wendy says the project benefitted from a quite specific client brief in terms of functionality but complete openness in terms of form and materials. However, the client wanted to achieve a flat lawn with swimming pool sitting flush with the living areas of the house on what is almost a one-in-three slope beneath a cliff. There was to be a study, media room and three bedrooms, with the main bedroom being on a mezzanine. 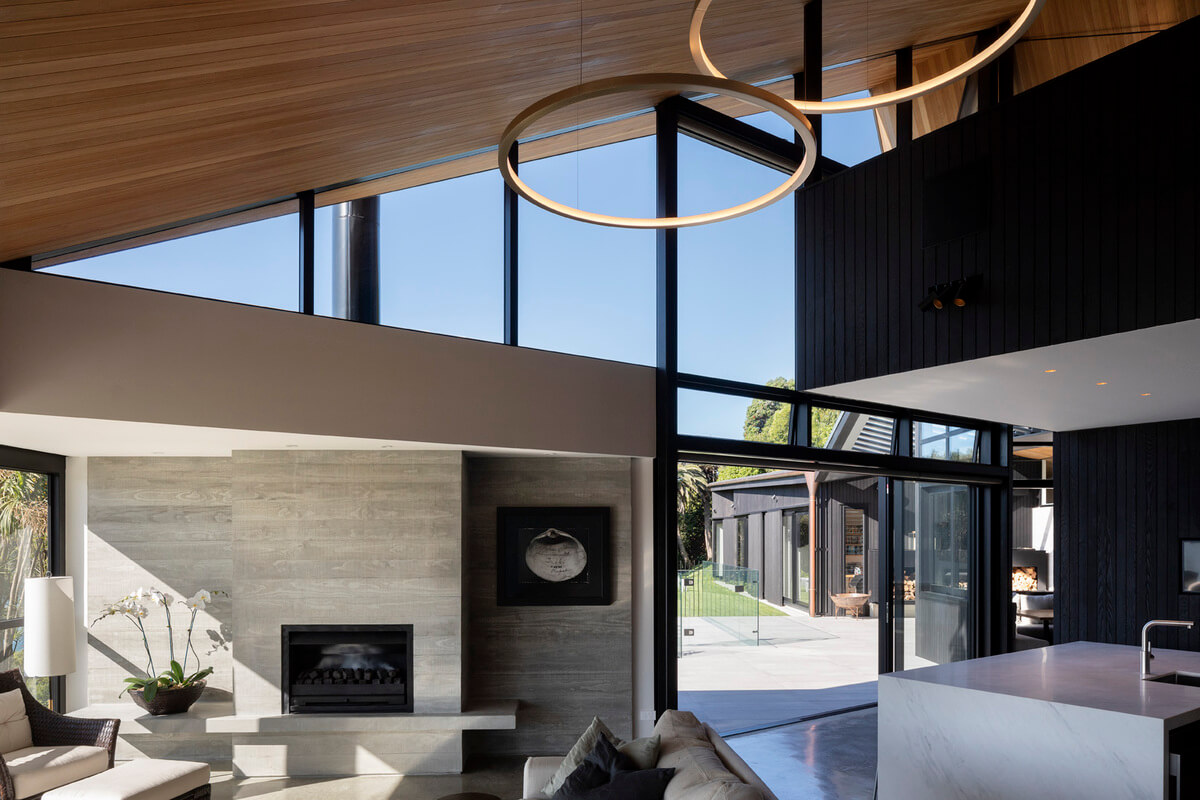 Most importantly, it must look like a house, not an apartment building.

“After consultation with engineers a judicious level was struck for the main floor, cutting minimally into the cliff on the one hand and retaining and lifting the downhill boundary to create a level platform.

“Entry to the site is from the south-western corner, five metres below the main floor level. The garage is further cut in with internal access to the double-height entry stairwell. The resultant section follows the natural contours with minimal manipulation in the overall scale of the cliff.”

The site enjoys a ‘wow’ view to the northwest, out across the basin and towards the Sky Tower and Auckland skyline. However, says Wendy, that did not automatically mean that the house would be oriented in that direction.

“It is always challenging to be looking westwards and across water, and my instinct is always to orient a house as much as possible to the north, anyway, which in this case allowed the focus to be over the land, taking in the private dell-like quality of the extreme end of the site.

“My personal belief is that views should be incidental to the experience of house, space and the relationships within. 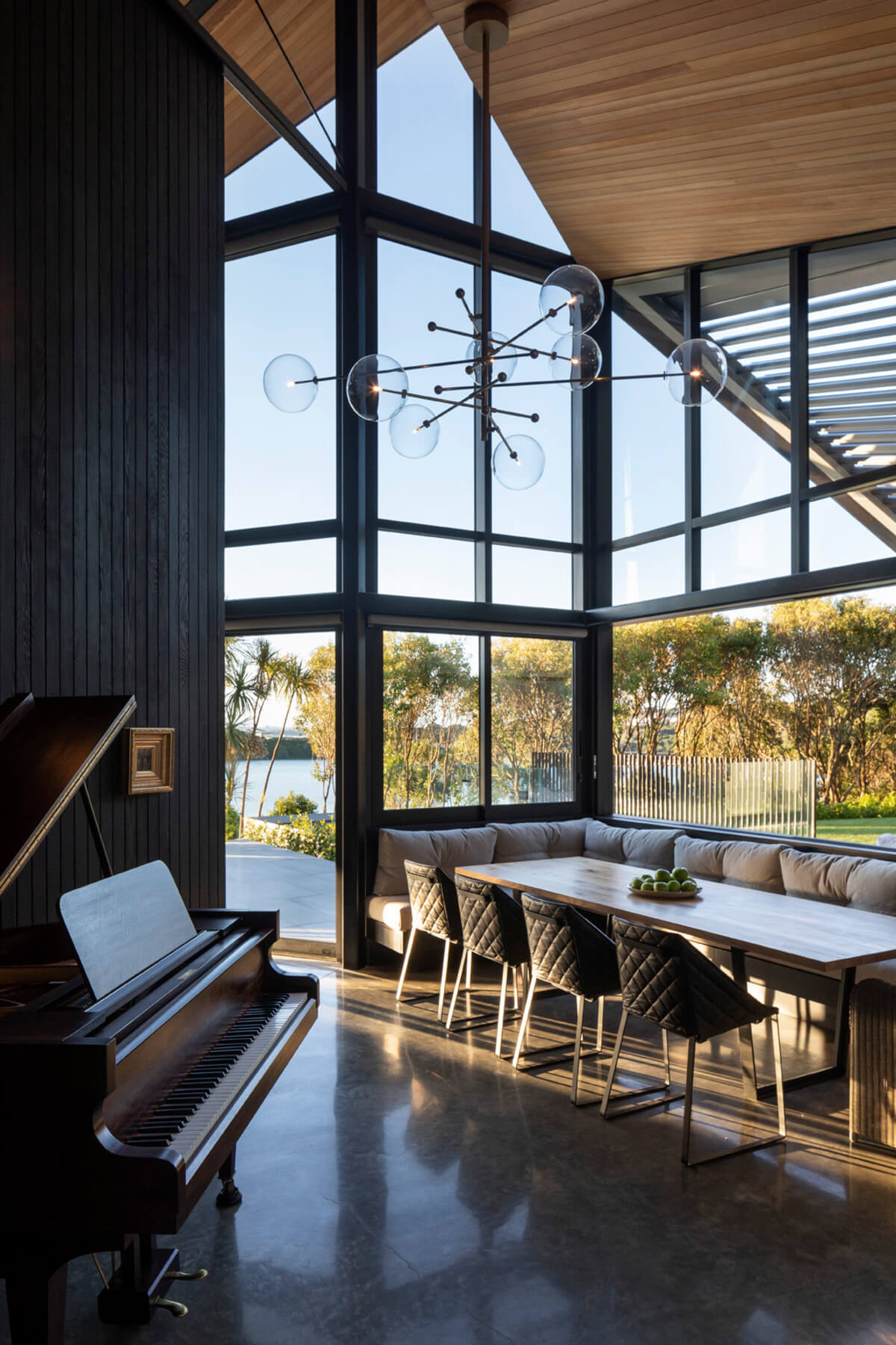 “The form and geometry of the house re-interprets the New Zealand vernacular of the gabled roof form predominant within the local suburb. The facade ‘bends’ with the site so that the entire north and west facing facades effectively form a sheltered bay—maximising water views to the west and north, as well as passive solar gain from the north.

“The manipulation of the facades in turn deflects the geometry of the gabled roof to create an irregular, sculpted form. The three-dimensional facade acts as an instrument for engaging with the garden and the basin, while expressing the dynamic forces of the volcanic contours.”

Extending along the base of the cliff, framing the lawn, a single-storey form subtly tapers and pulls away from the main house to enable morning sun penetration to the dining room. This wing naturally became a family room/guest wing and allowed for the insertion of a glazed and louvered outdoor room, centred on the swimming pool. A glazed pivot door connects these two spaces, while an adjacent one leads down the hallway to the bedroom wing. 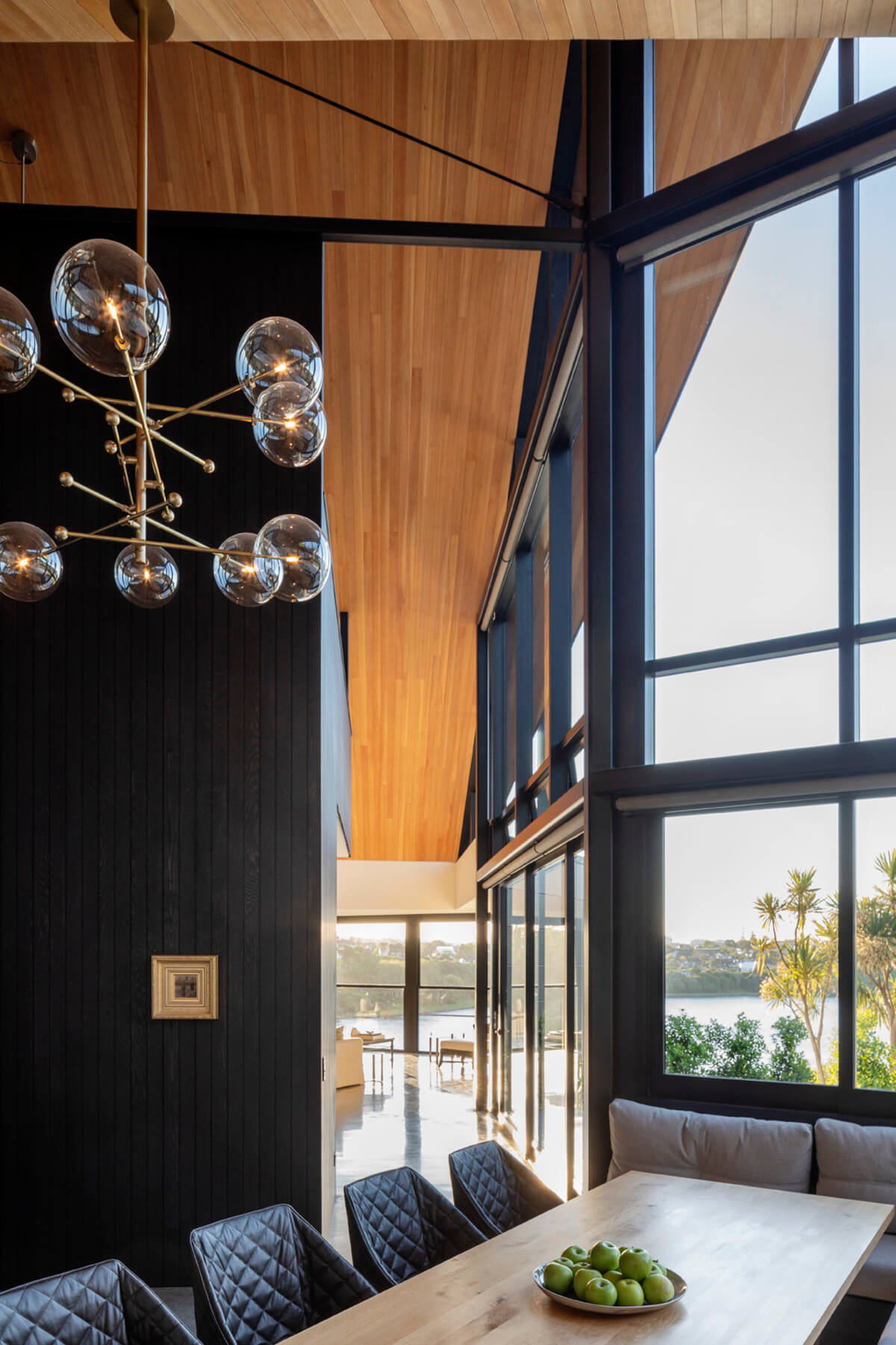 The three facades—north, south and west—are highly glazed, permeable screens allowing cross ventilation and views through the house. Window and balcony openings travel freely across the facades expressing lightness and movement horizontally and vertically through all three levels.

“The big view is preserved for the climatic cantilever, reducing the height of glazing to mitigate glare while the grand sweep of the roof hugs the cliff and levels out to project dramatically over the water.

“Here the full intensity of the view—with no deck to mediate between inside and out, just a balcony of sliding sashes—is allowed to capture the attention, becoming an interactive element rather than a filtered prospect on the edge of consciousness.”

Wendy says the house was conceived as one large shelter wrapping around the land.

“The roof form is a big gesture, in the scale of the cliff, embracing the house. Inside, interconnected spaces are informed by wall and ceiling planes. The ground floor of the building is conceived as a continuous landscape that flows from the living areas to the terrace, lawn and outdoor room.

“The kitchen lies at the heart of this landscape and it is from here that I see the homeowners conduct their entertaining—very much in the nature of a stage. There is a circularity to the plan, revolving around this kitchen hub—I like the notion of alternate routes within a house. The main, mezzanine bedroom hovers over this heart, compressing the activity in this zone, all of which is held under the soaring gable. 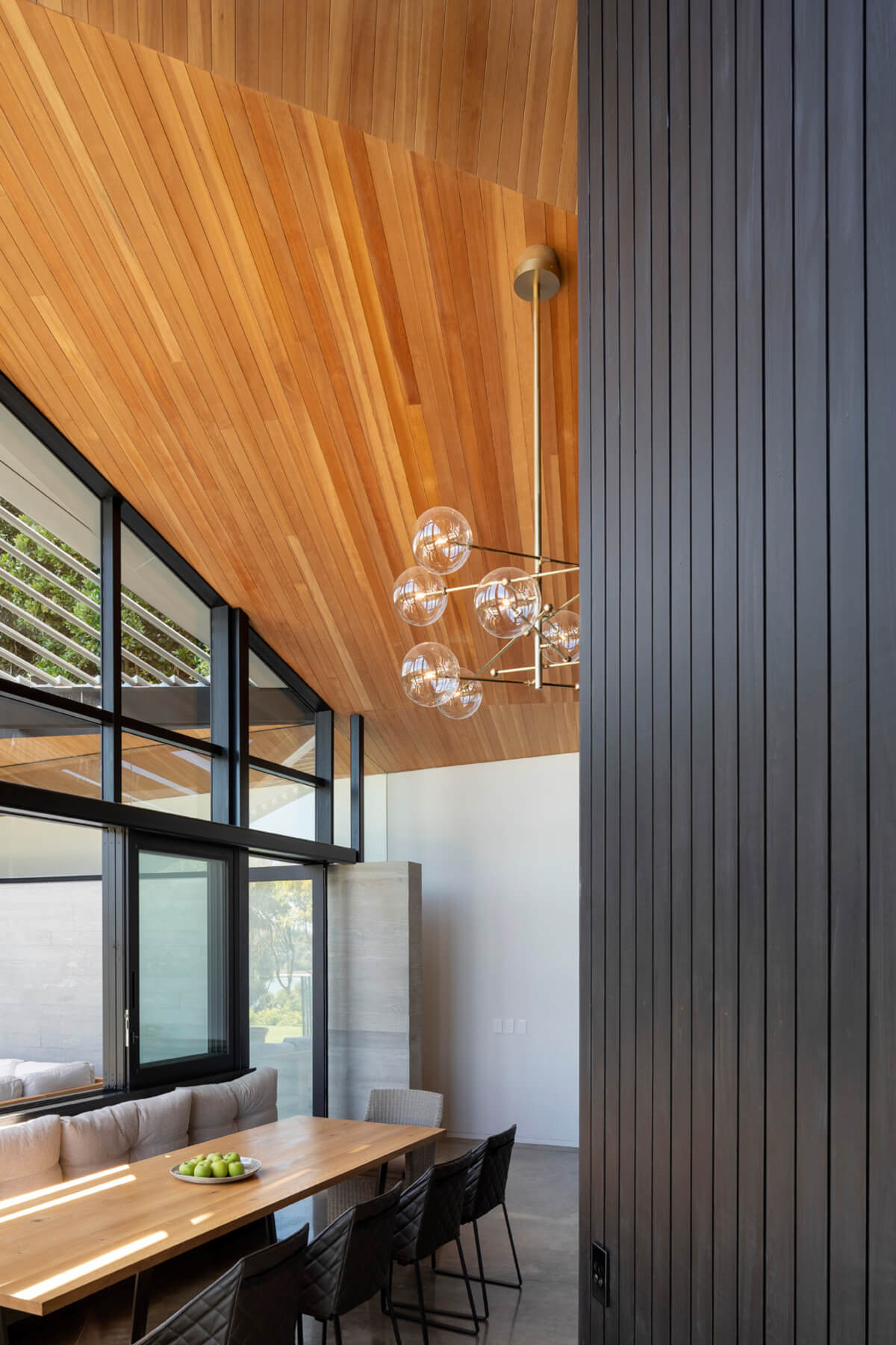 “The dining room I have conceived of as having a more ‘café style’ for the daytime, with the table in the bay window. However, the room is large enough—it is also home to the homeowners’ baby grand—to be quite flexible in it’s layout. Here, the ceiling plane lowers over the main dining space to feel relatively intimate next to the soaring volume over the mezzanine.”

Full-width sliding windows around the dining bay allow relaxed interaction with the other social spaces.

Upstairs, the main bedroom is bathed in light from the gable window, with elevated views to the north across the basin filtered by the trees of the reserve. The space is defined by the folds of the faceted ceiling and solar gain is modulated with operable vertical louvres.

This is very much an entertaining house, with multi-faceted spaces revealing themselves as part of a journey from entry to main level and via the kitchen/living to the pool, outdoor room and lawn—and yet, at the same time, it is a house that enfolds its two occupants within a protective cloak, sheltering them from prying eyes and changeable weather. 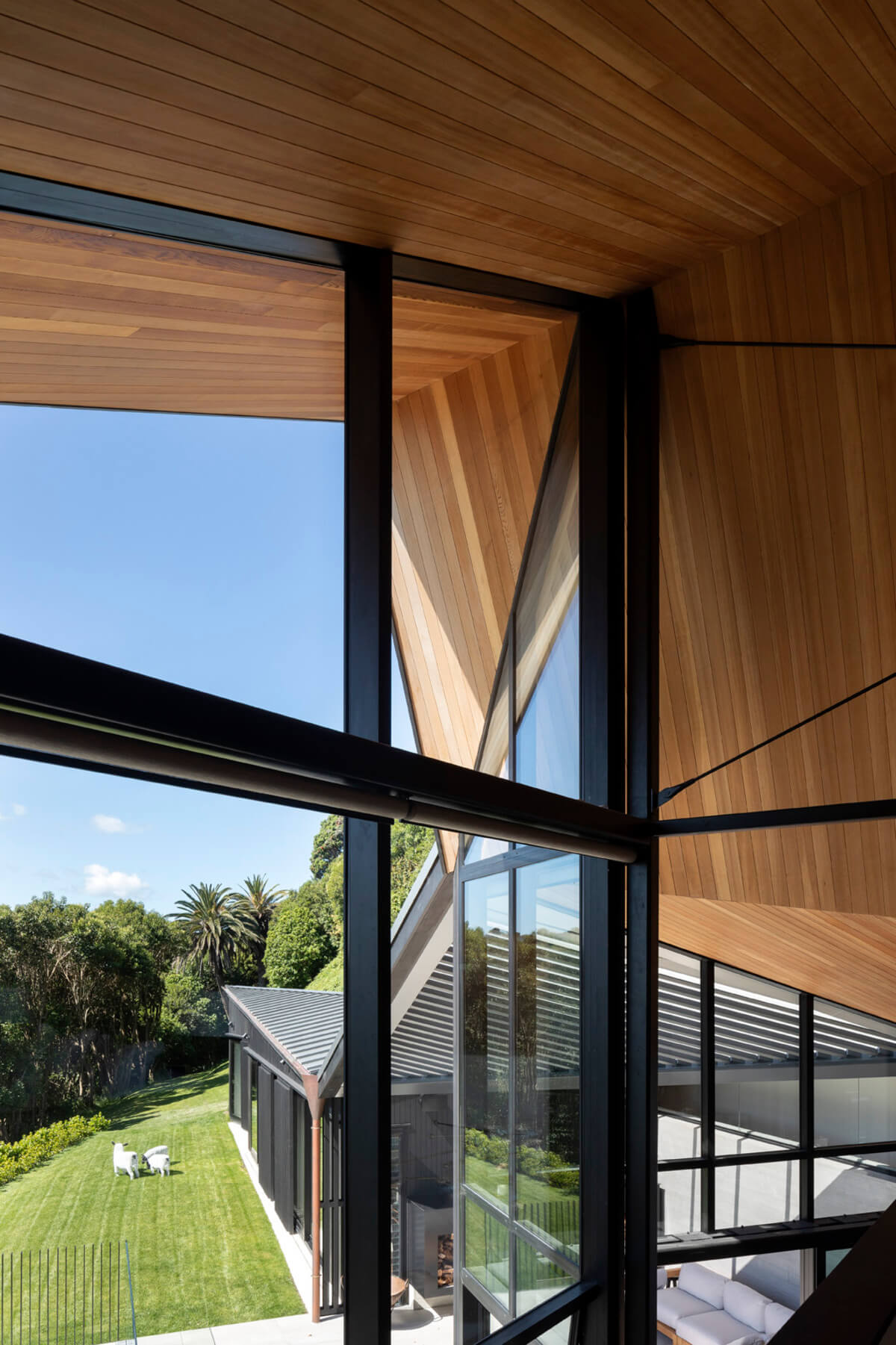 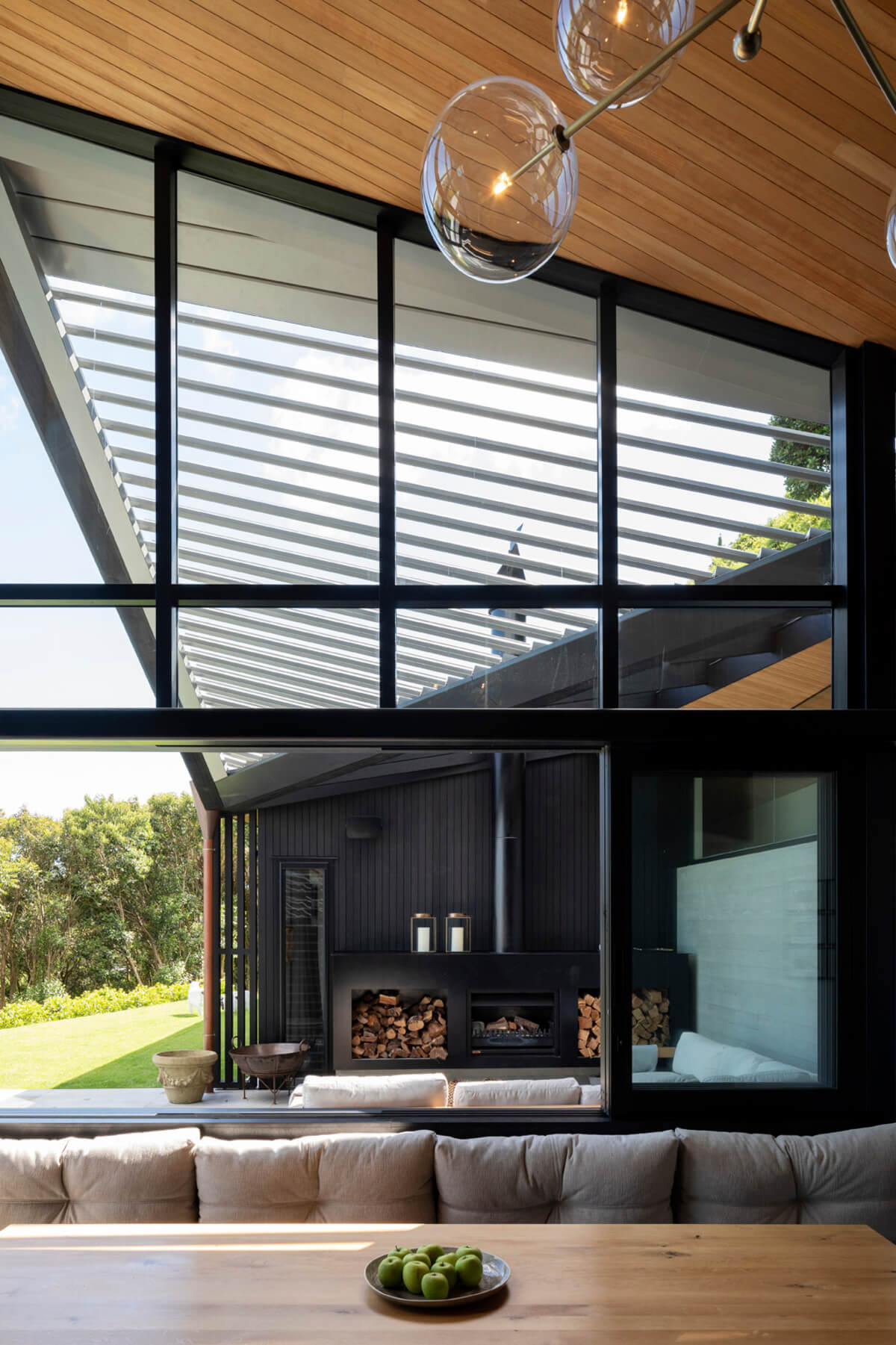 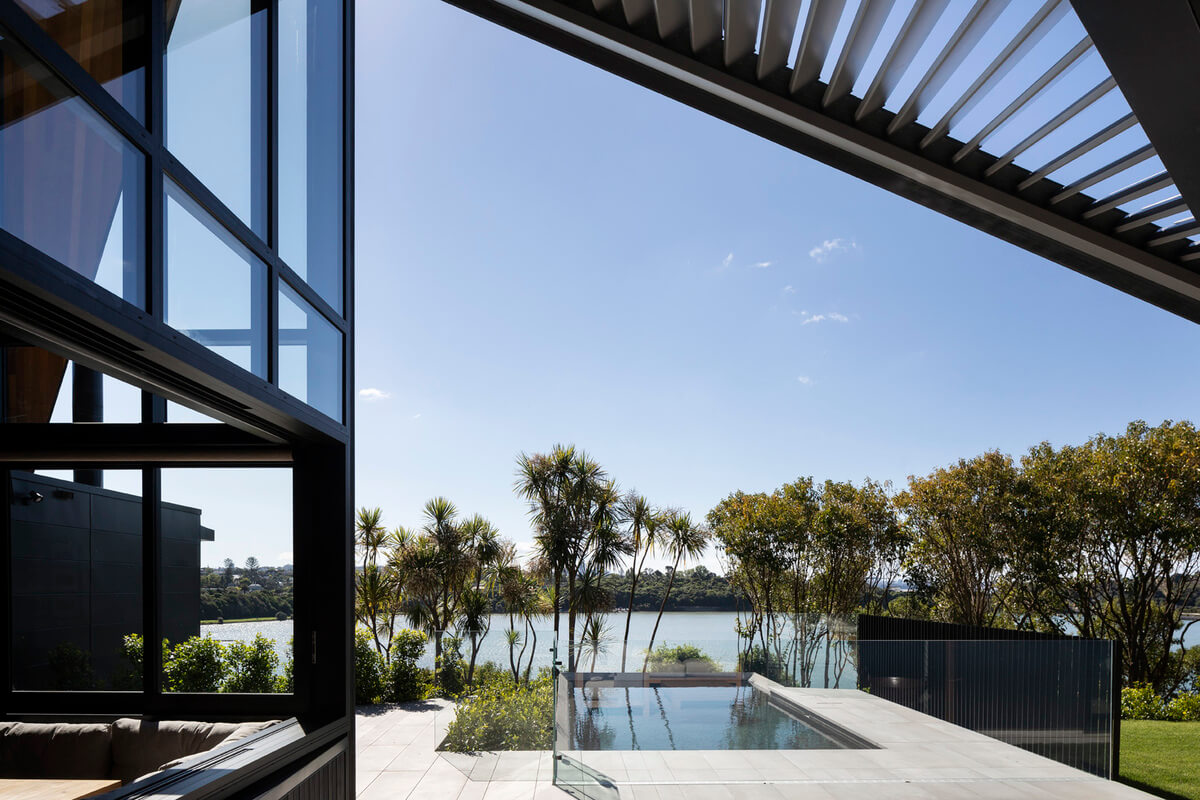 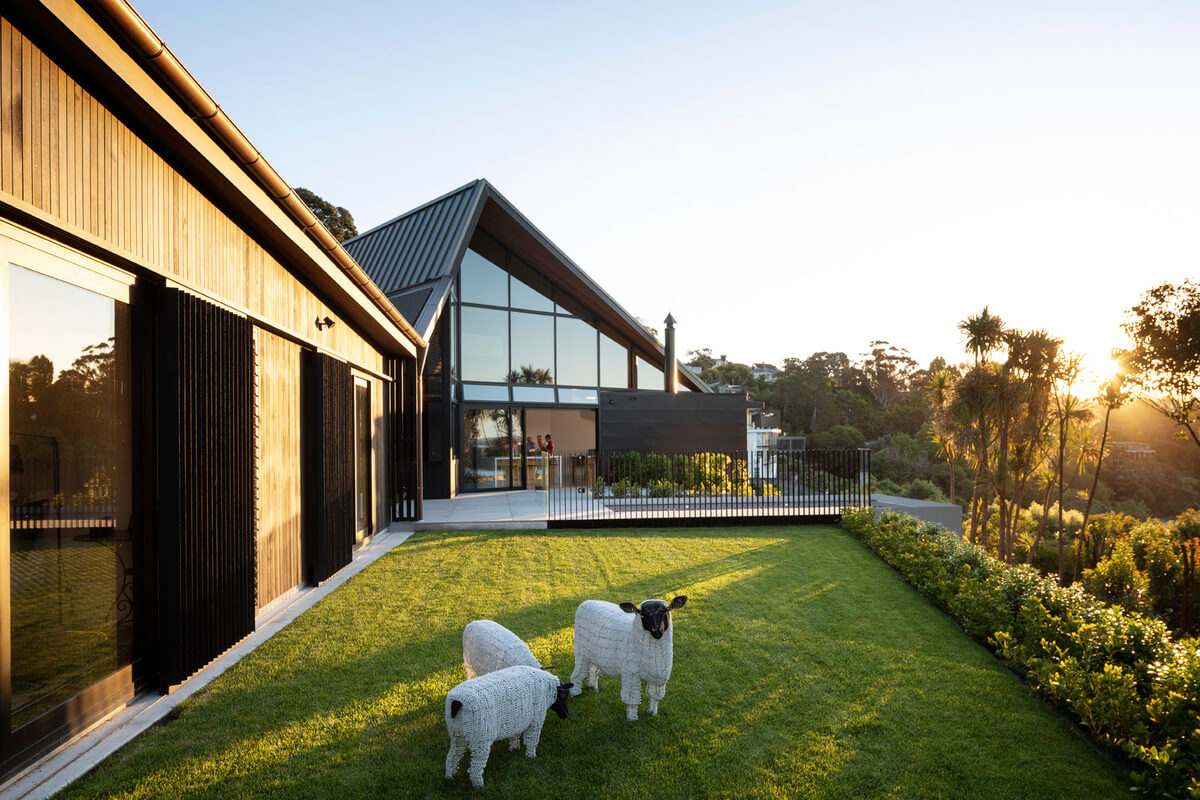 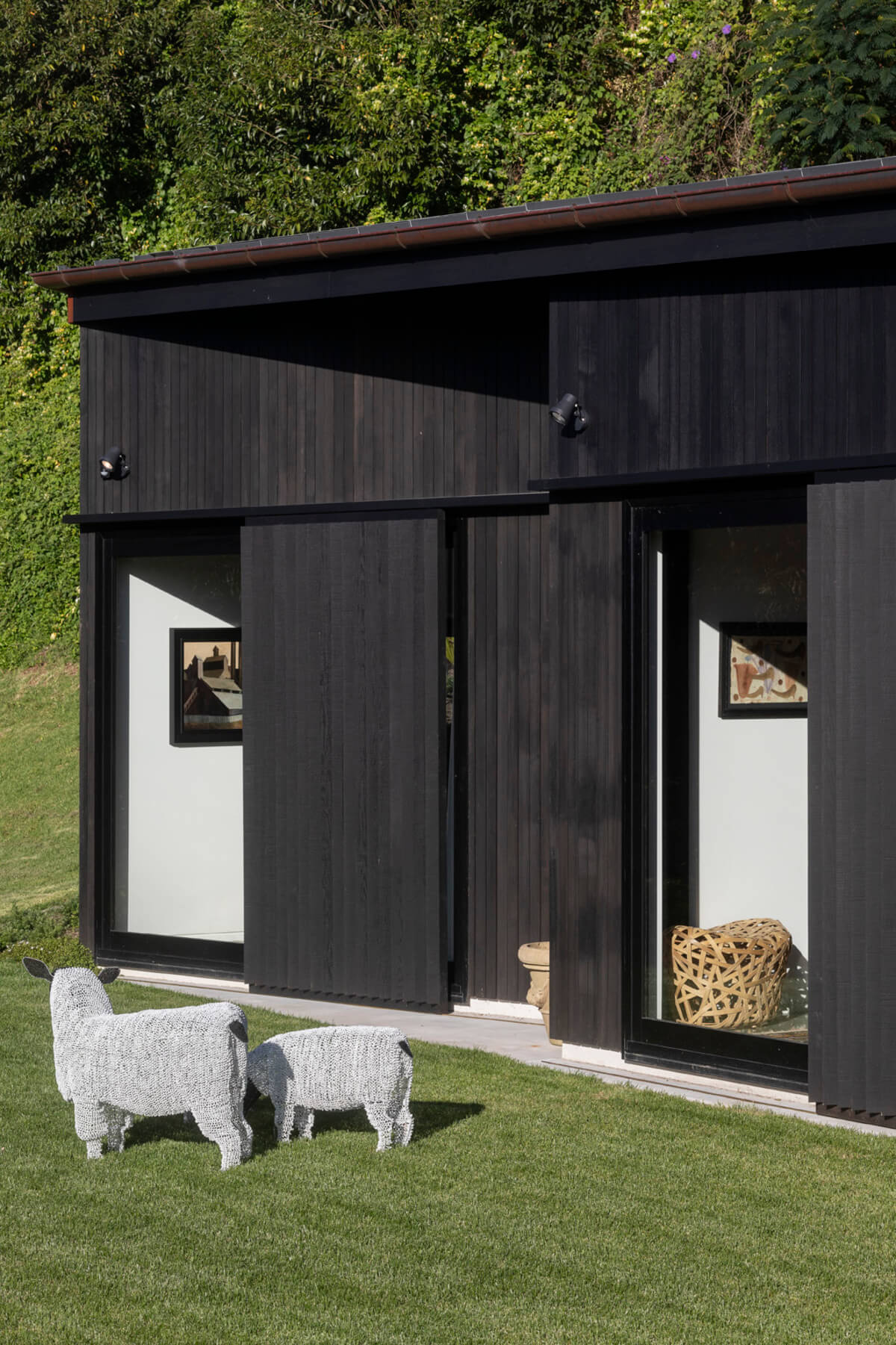 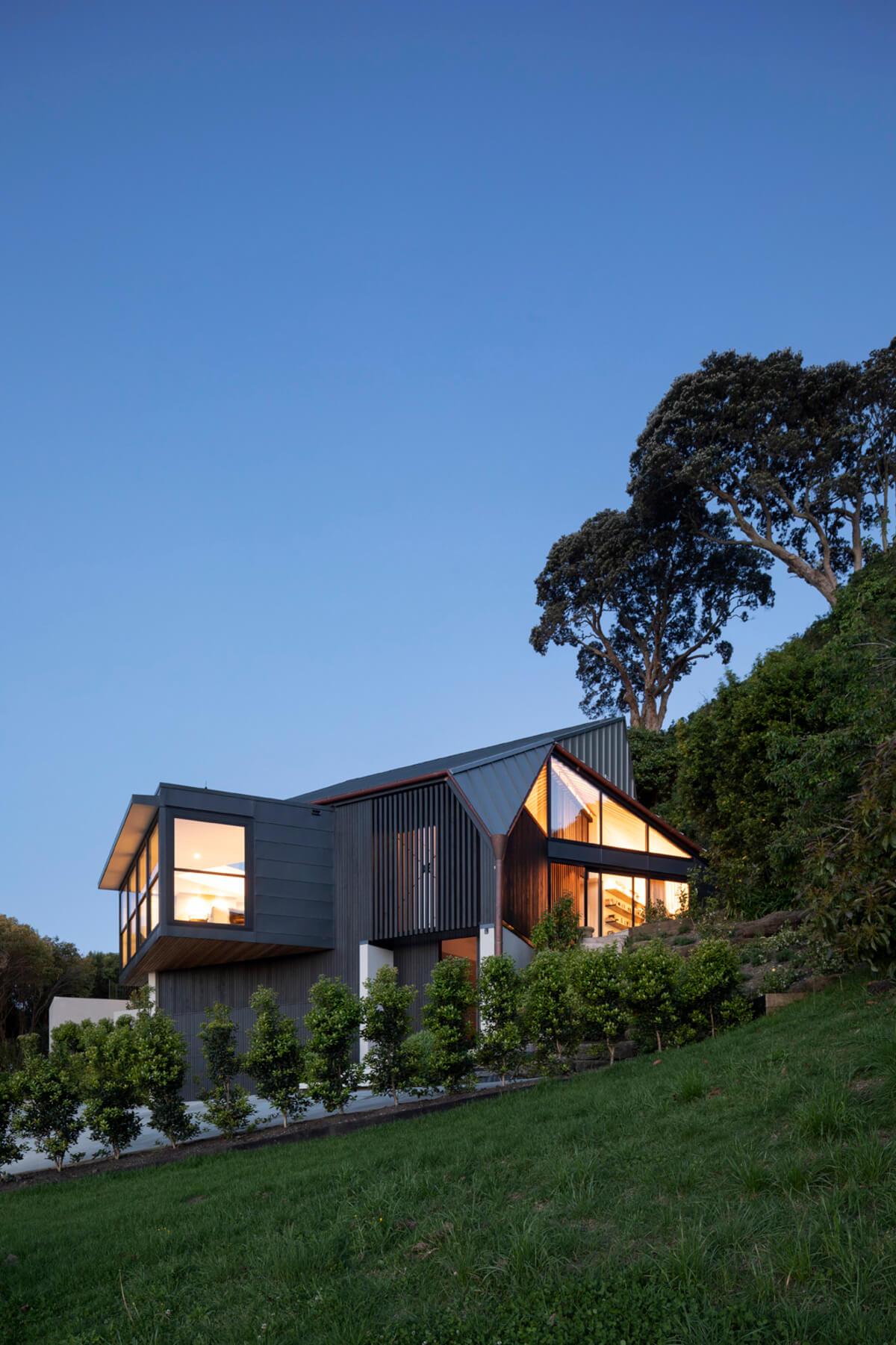 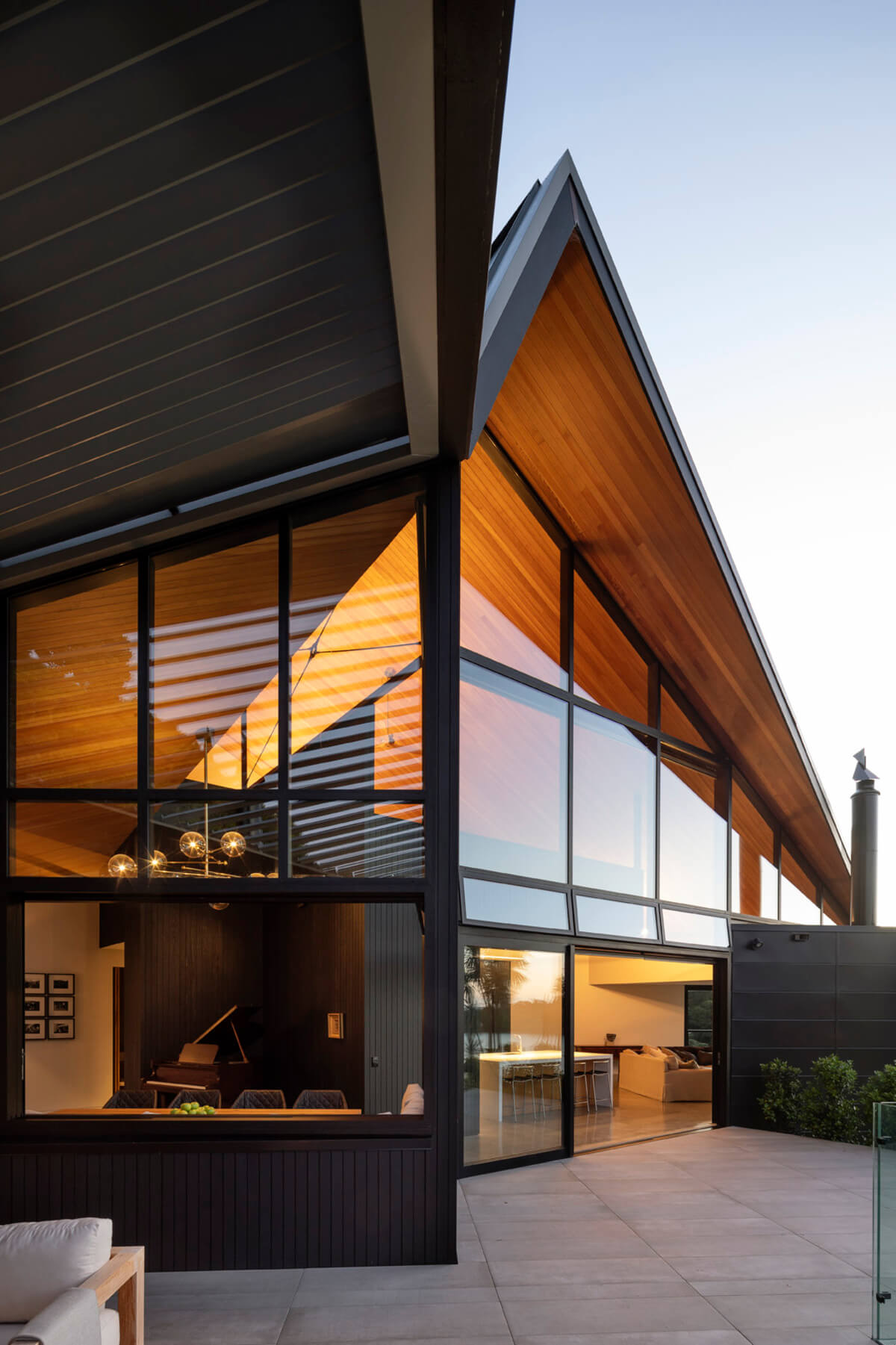 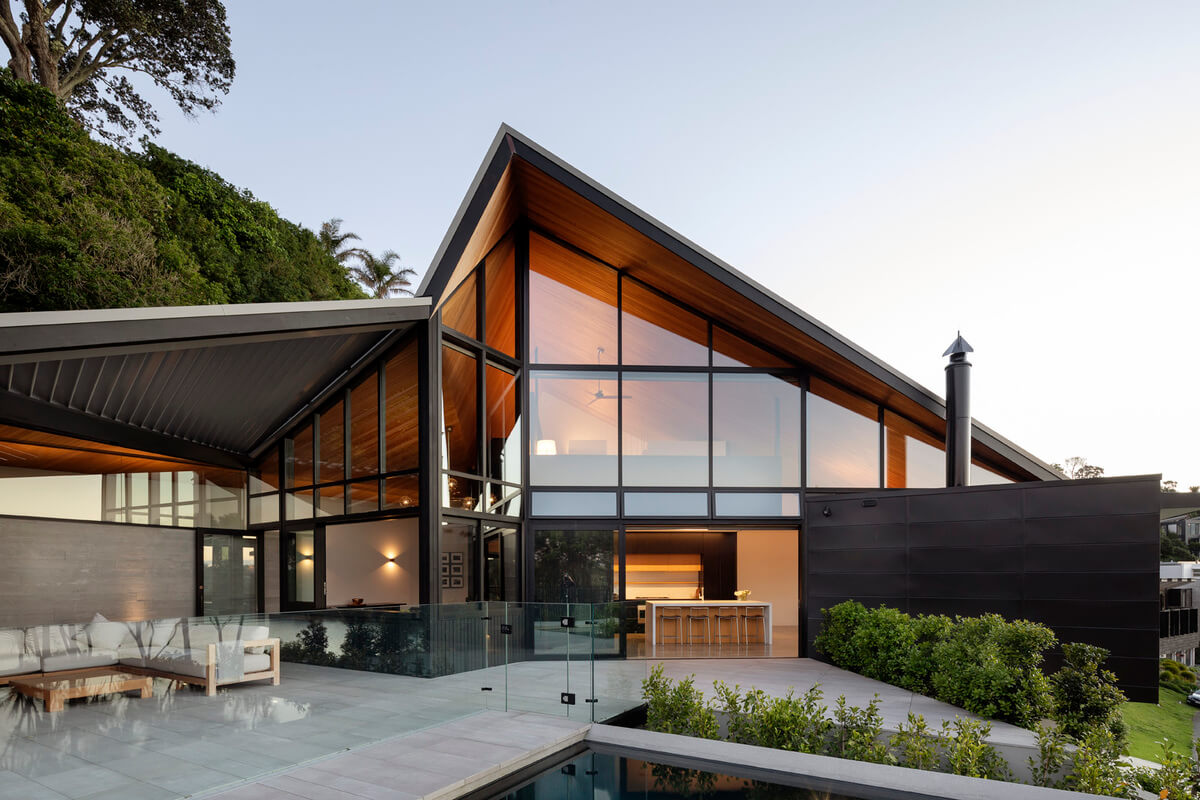 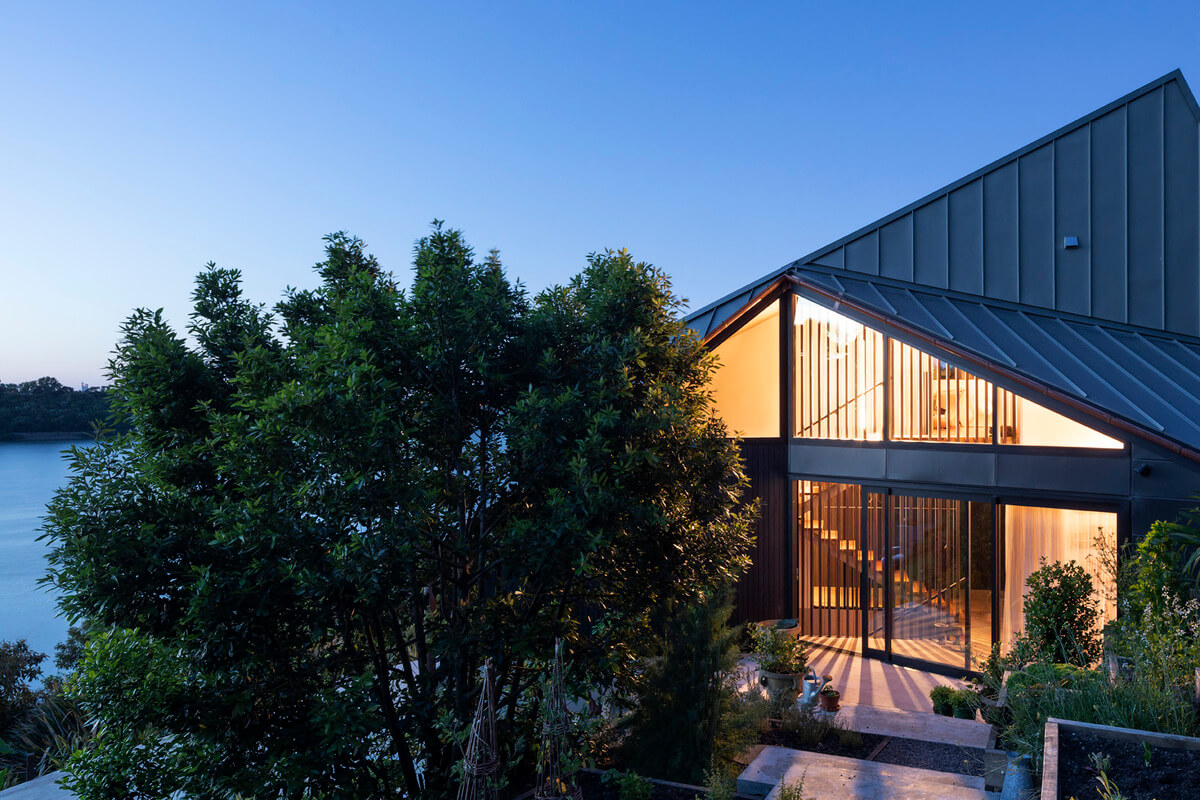 Conncet with the Shacklock Architects 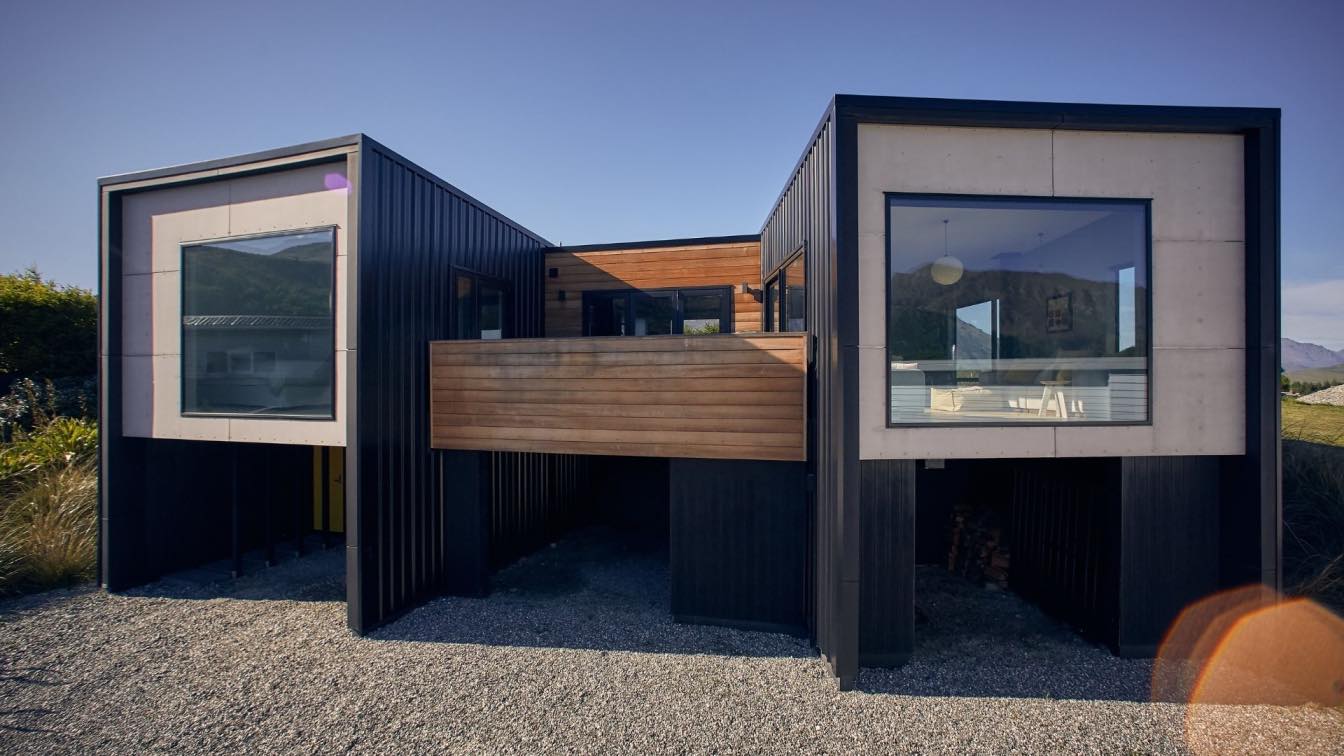 Home for a Winemaker in Arrowtown, New Zealand by Stacey Farrell Architect 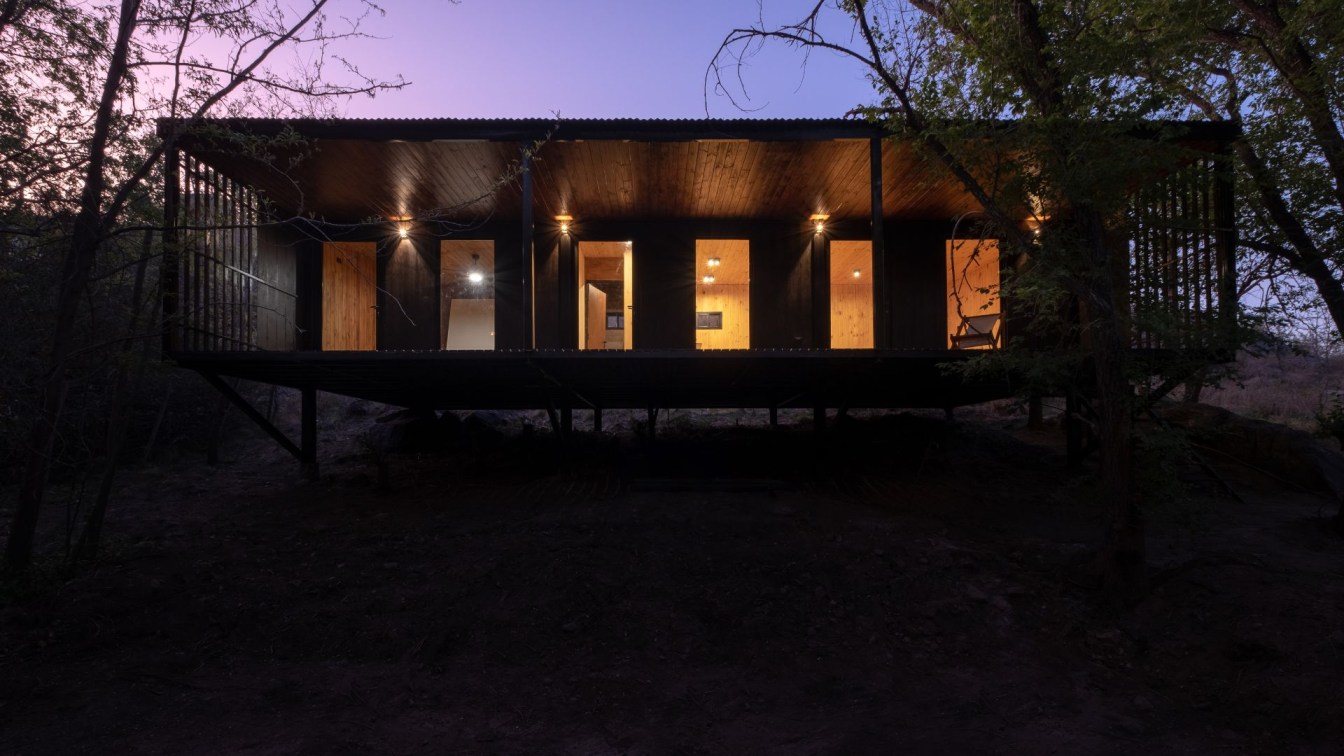 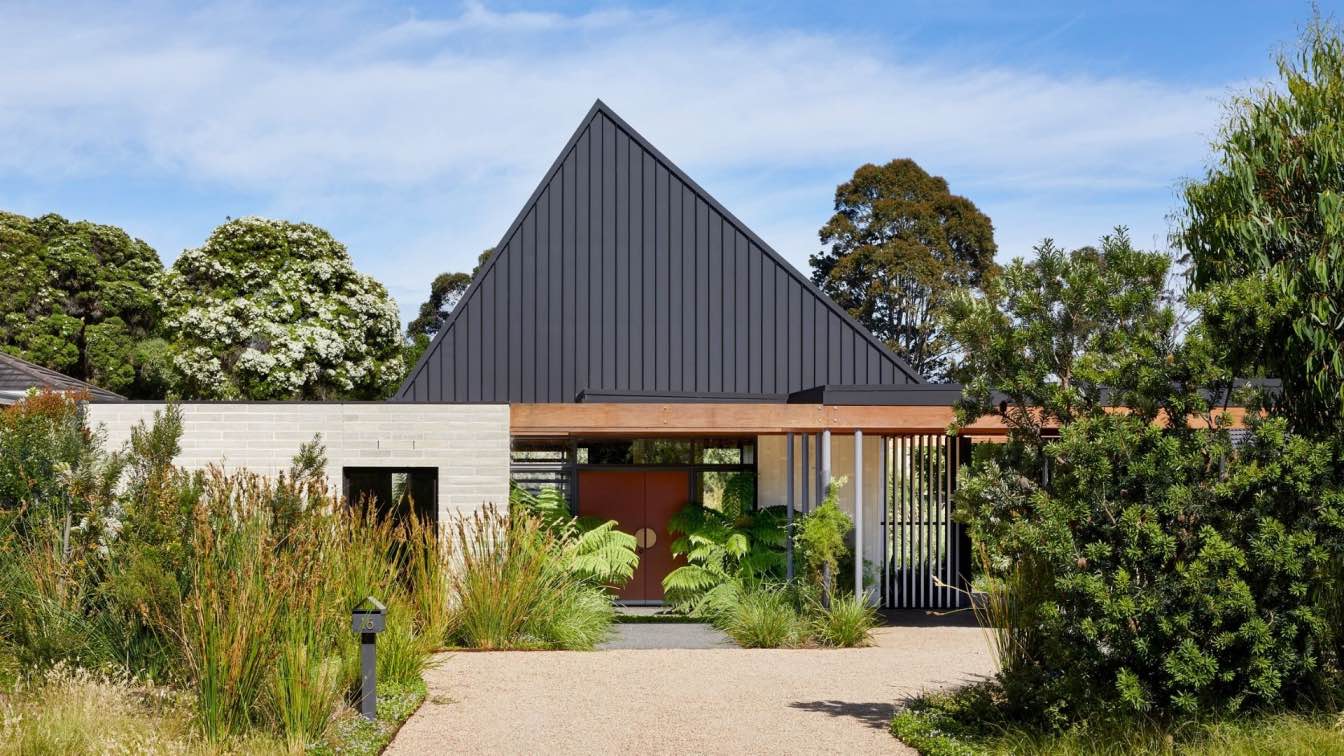 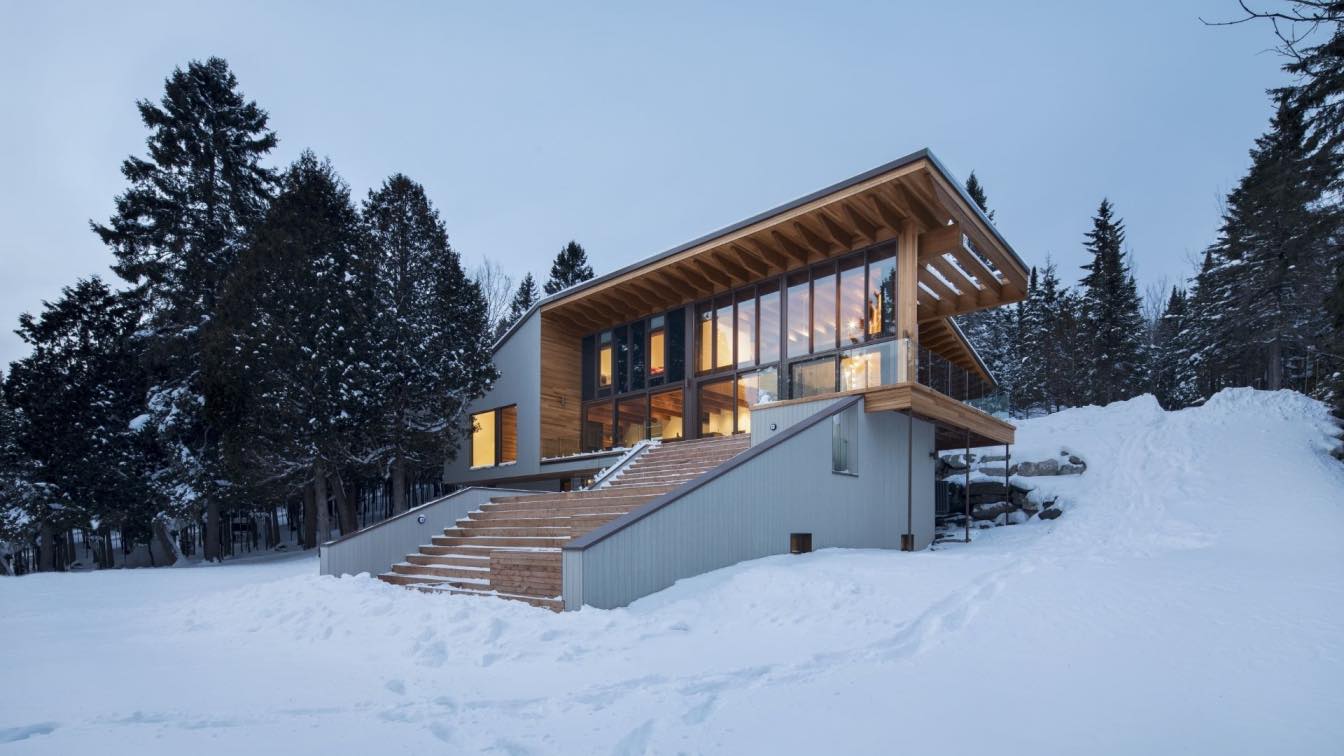