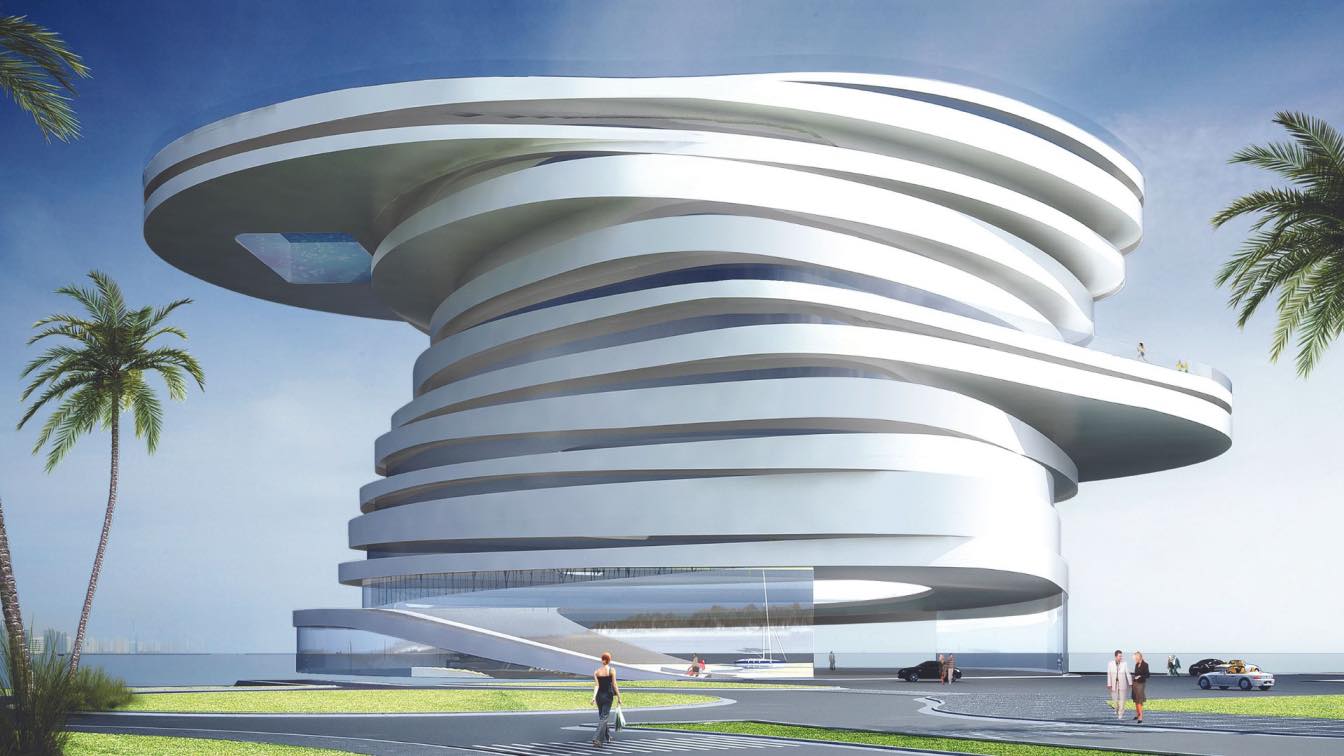 Leeser Architecture, an internationally recognized design firm, has won a invited competition for a five-star luxury hotel in the Zayed Bay in Abu Dhabi, UAE. Called the Helix Hotel for its staggered floor plates, it rests in the bay, partially floating in the water and adjacent to the serpentine Sheik Zayed Bridge currently under construction by designer Zaha Hadid. With the Helix, Leeser Architecture has devised a new way to consider hotel culture in the Emirates, highlighting elements that are usually unseen, and playfully enlivening those parts that traditionally remain static and mundane.

The commission was the result of an invited competition held by Al Qudra Real Estate in partnership with QP International, both local Abu Dhabi holdings groups with projects featured across the UAE. Zayed Bay will be a comprehensive development built along a new road, and the site will include office buildings as well as condominiums and retail along the water. The Helix is the centerpiece of this new development. 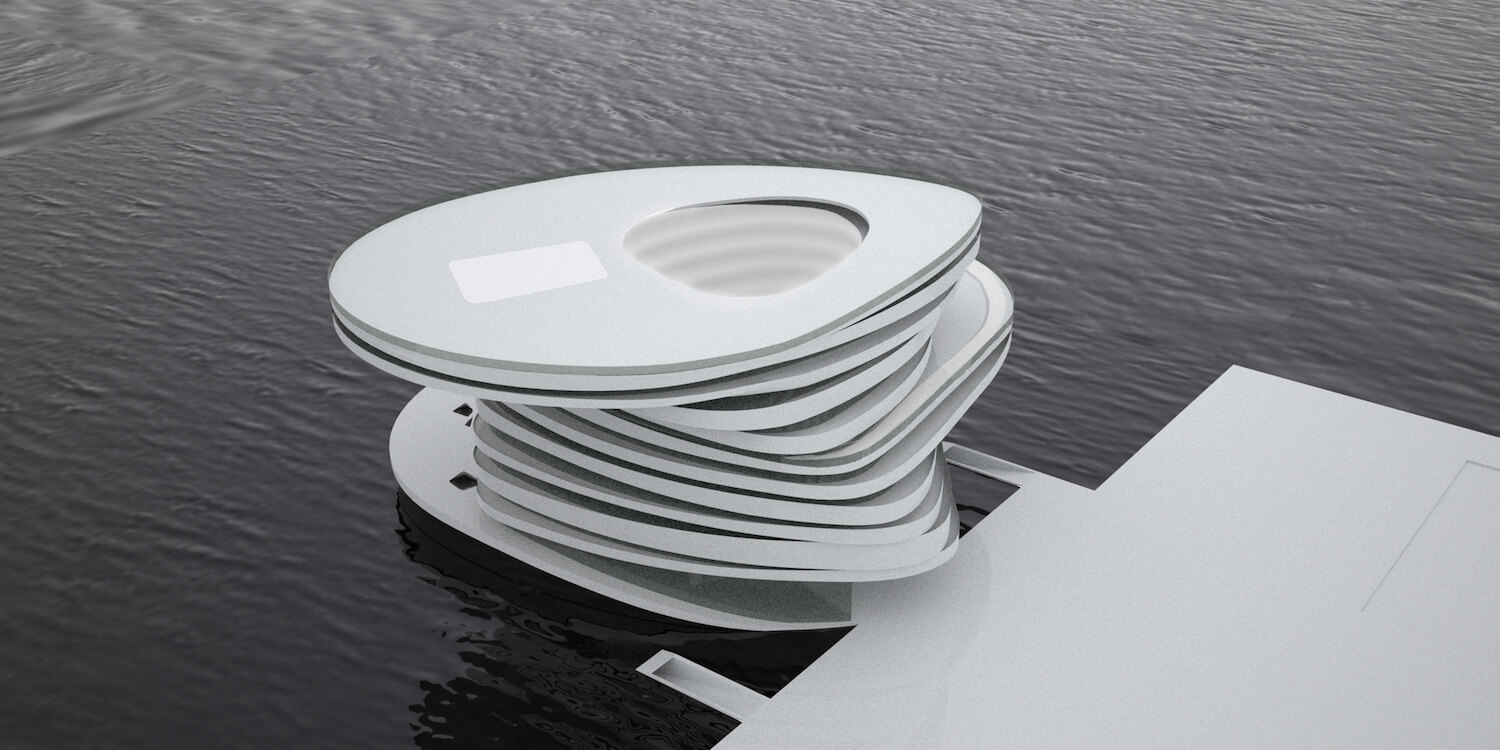 With 208 guest rooms and suites arranged around a helical floor, the hotel immediately dispenses with the idea that visitors must engage in the stale paradigms of rigid hallways and atria that characterize a typical hotel stay. The floor constantly shifts in width and pitch as it rises to the top floor, keeping public spaces always in flux. No two rooms positioned across from each other have exact views to the other side, already pulling the visitor out of the pedestrian and into the hotel’s uniquely urban world.

As the helix winds upward, programmatic elements change from lounges and restaurants on the bay, to meeting rooms and conference facilities, to lounges and cafes, to the luxury indoor-outdoor health spa on the fifth floor, to, finally, the upper pool deck on the roof. The running track on the fifth floor represents the only moment when the ramping ceases and a flat surface prevails – a sleight of hand on the architect’s part, and an unexpected luxury that fit vacationers can enjoy in the cooler months. 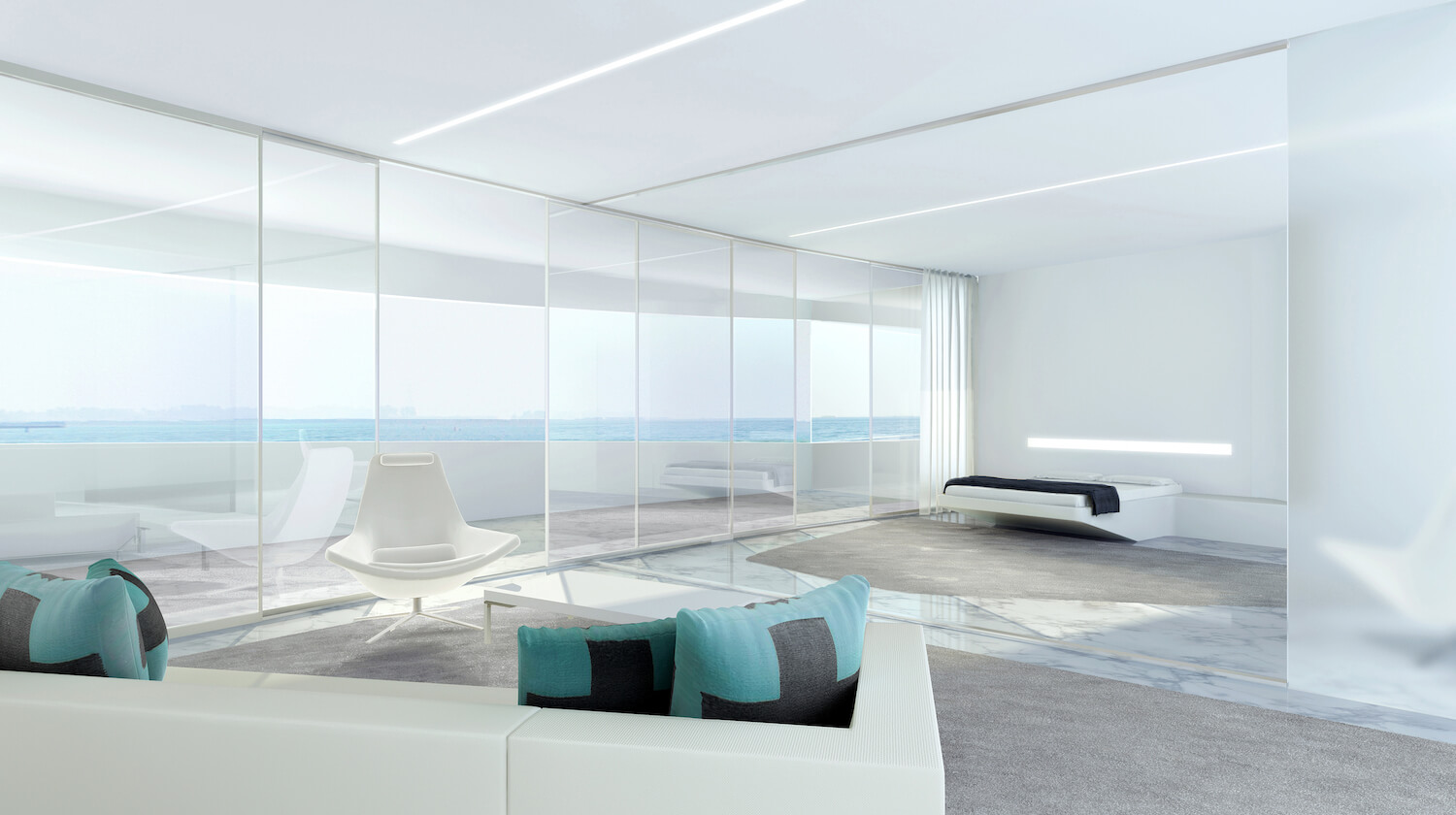 Conceptually, the Helix Hotel participates in a critical dialogue between opulence and urbanness, between the variety of services offered by a small city and the demands of a five-star hotel guest. The floor suggests the curves a winding street would take through a bustling town, and many programmatic elements are open to views from across the central void. Though the void seems to offer unmitigated visibility, there are enclaves for private meetings and guest privacy. It is designed so that one activity feeds into the next rather than affecting sharp separations between each activity. In this way it develops a feeling of being free to whimsically experience all aspects of the hotel without having to decide on an agenda in advance.

On the luxury side of vacation culture, there are playful elements that make the hotel a designer destination in an iconic setting. From the outset, it is as much a showplace for the abundance of opulent life as it is a fully incorporated urban experience. For example, the building has a functional reverse fountain, which drops water from the ceiling down through the void to the lower lobby. At the entry, valets drive clients’ cars into the car park, which, rather than being predictably aboveground or underneath the hotel, is situated instead under the bay. Cars are literally driven into the water. 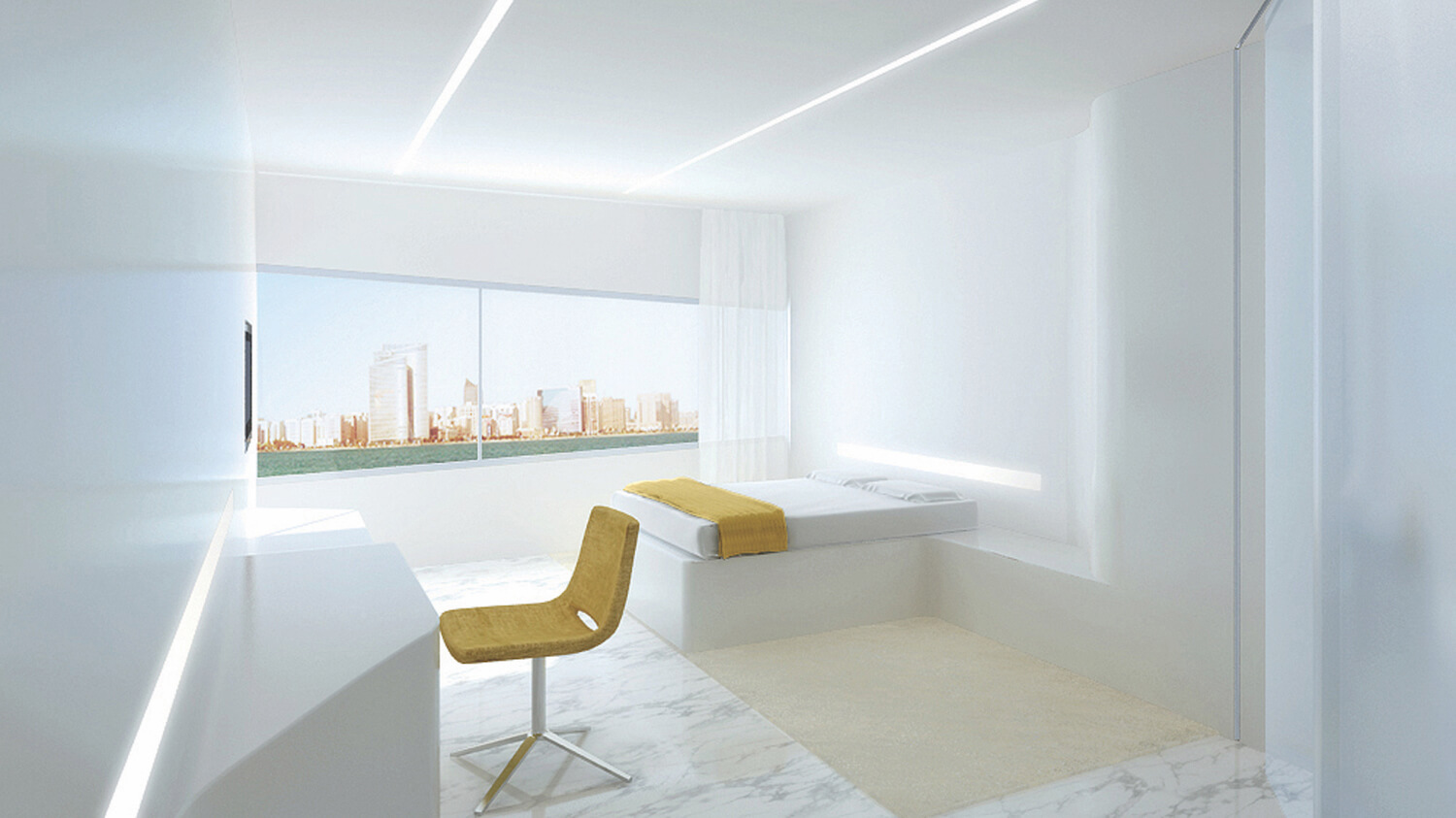 As guests make their way up to their suites, remarkable views out onto the Zayed Bay become even more dramatic on the upper floors. At the top of the Helix, the rooftop pool deck features a full sized swimming pool with a glass bottom, with the water and swimmers visible from eight floors below at ground level. In the restaurant below the lobby, the bay’s waves are so near to the floor plate that they lap up onto the edge of the restaurant inside of the glass curtain wall. The wall retracts, revealing a sweeping breeze.

While focusing on unique design, Leeser Architecture is also committed to sound sustainability practices and worked with consultant Atelier Ten to determine the best possible conditions and materials for heat and energy conservation. The indoor waterfall allows for the accumulation of heat inside the hotel to be minimal by filtering cool water back up into the system as it falls through the void. In the sub-lobby, a dynamic glass wall is built from the base of the second floor down into the water. The wall acts as a curtain would, opening when the weather is cool enough and closing when it is too hot for exposure to the desert air. Portions of the outside surface are clad in panels made of a new material called GROW, which has both photovoltaic and wind harnessing capabilities. 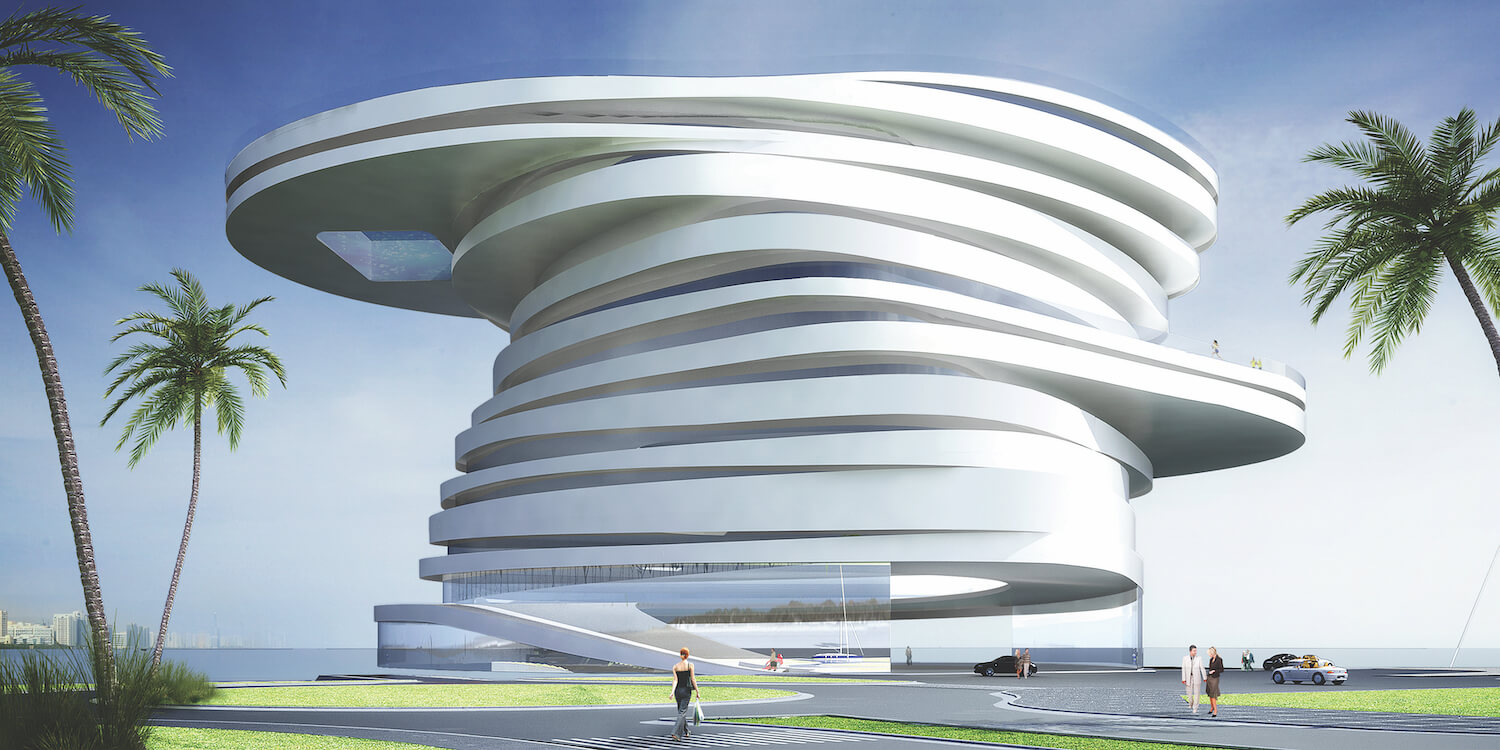 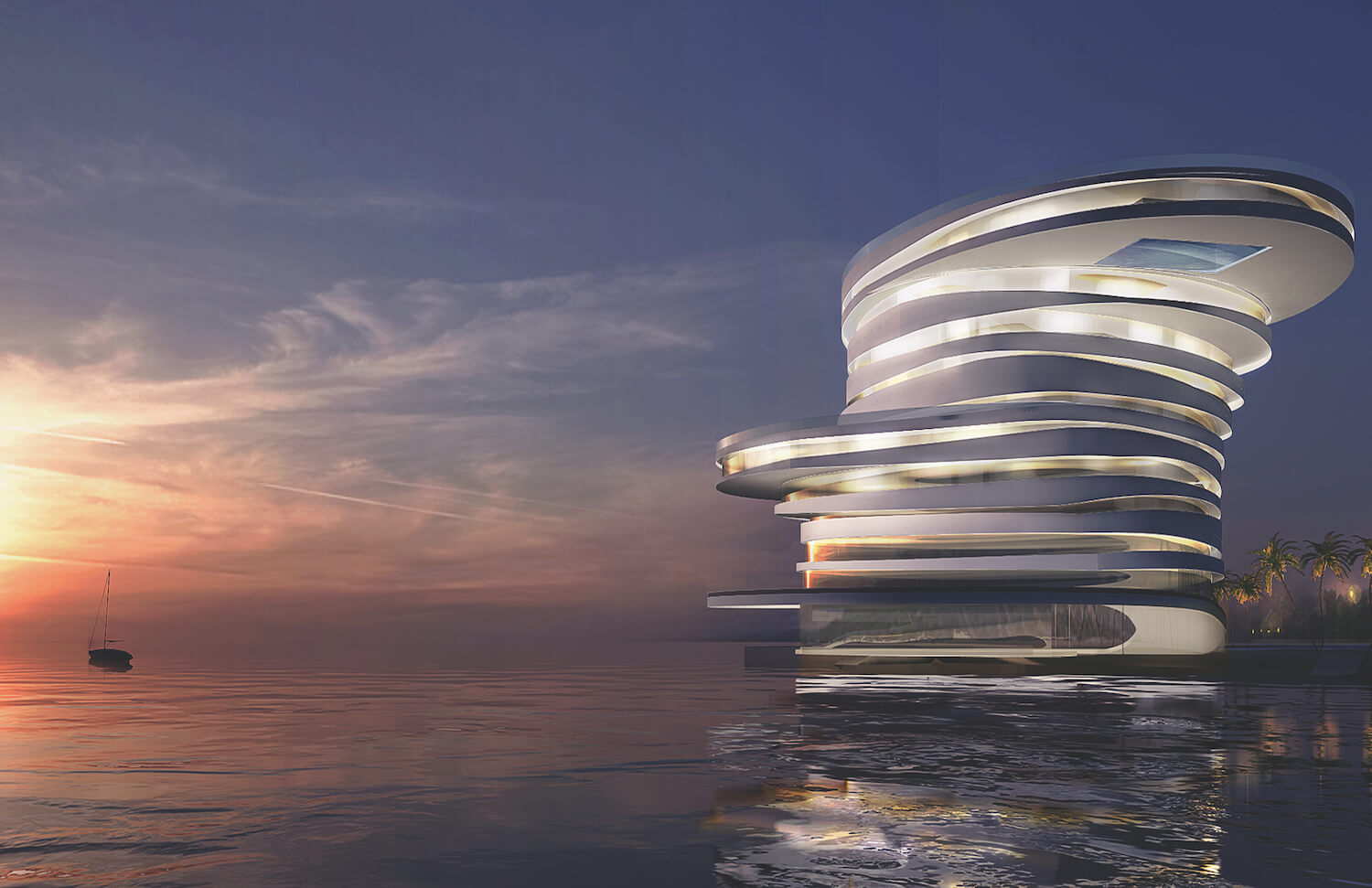 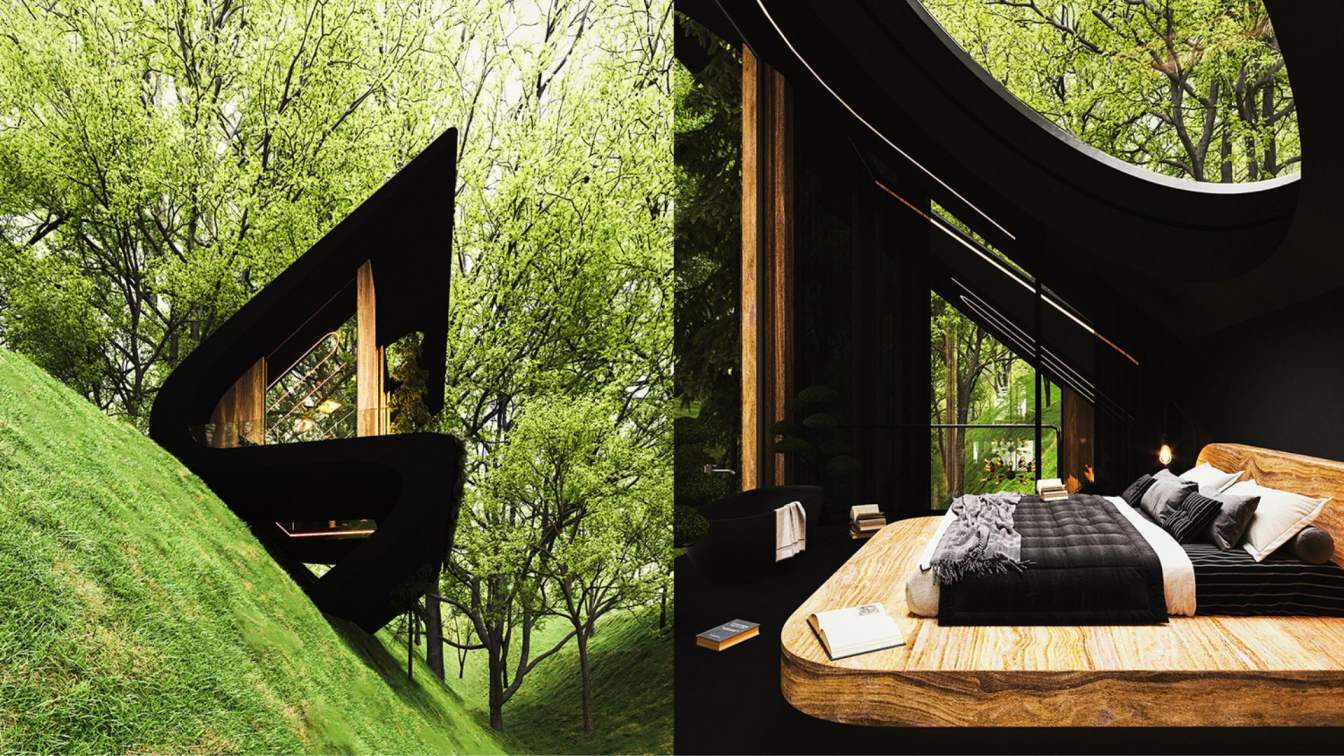 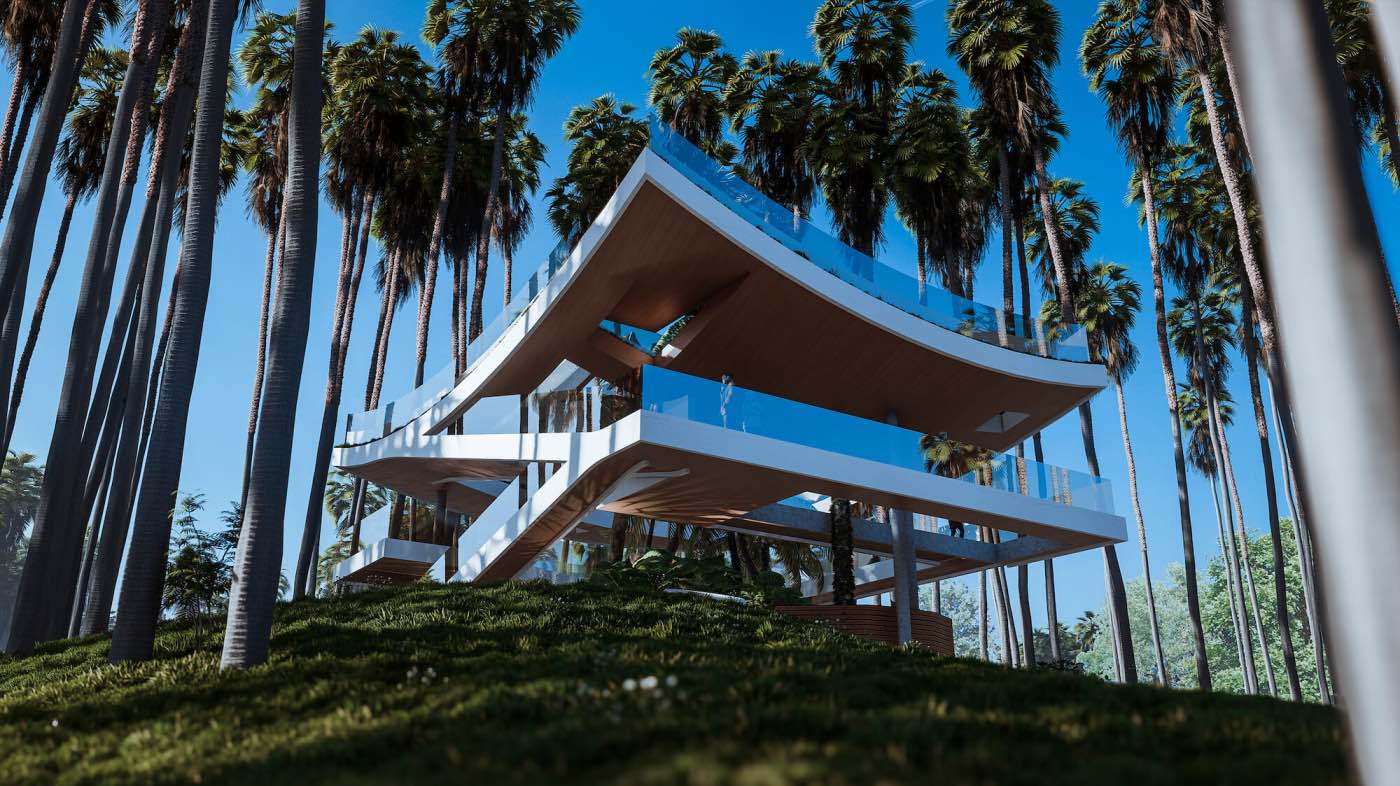 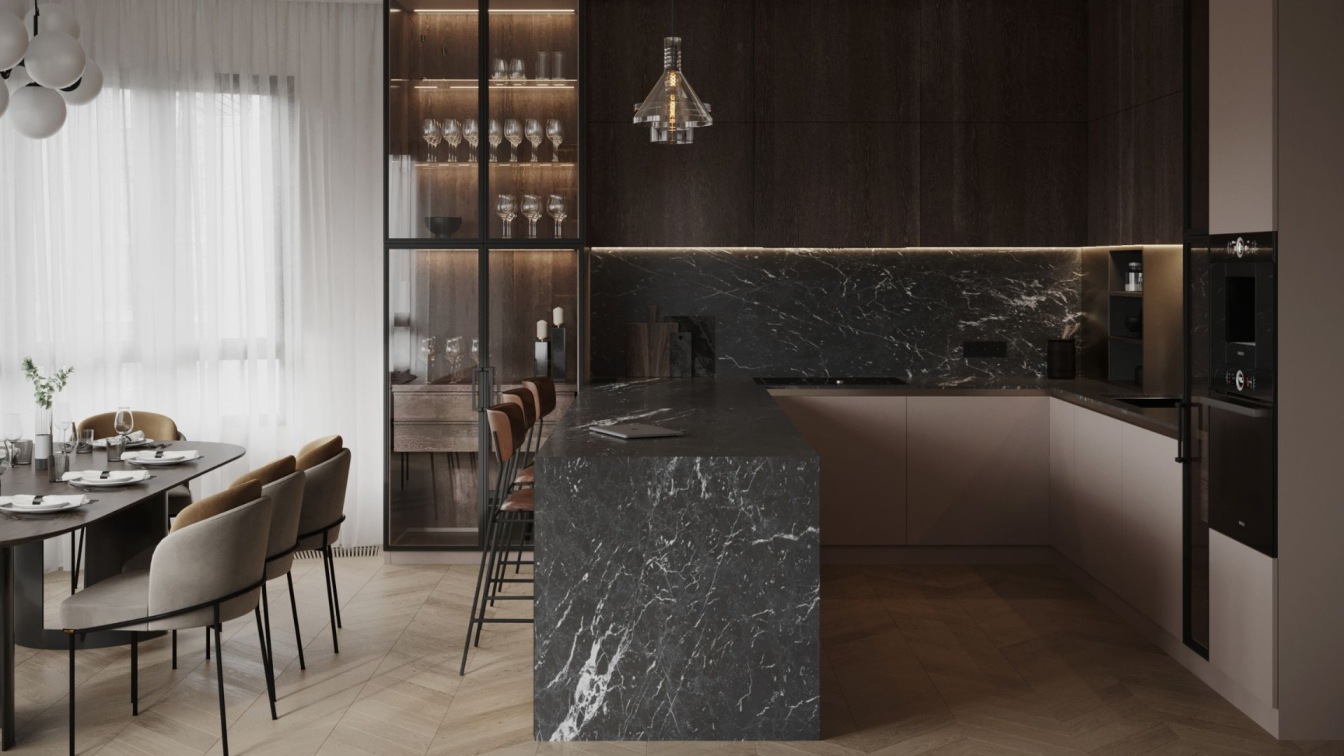 Single Malt Apartment in Kyiv, Ukraine by Between The Walls 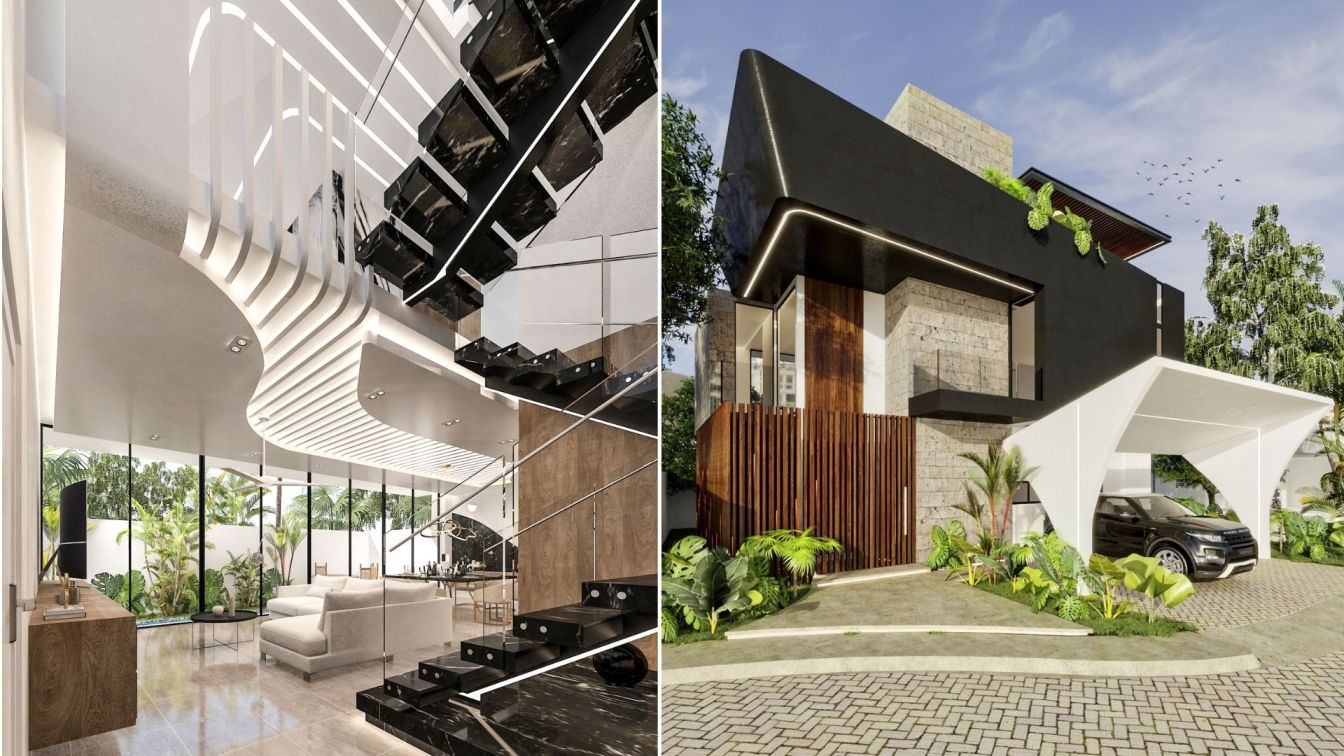