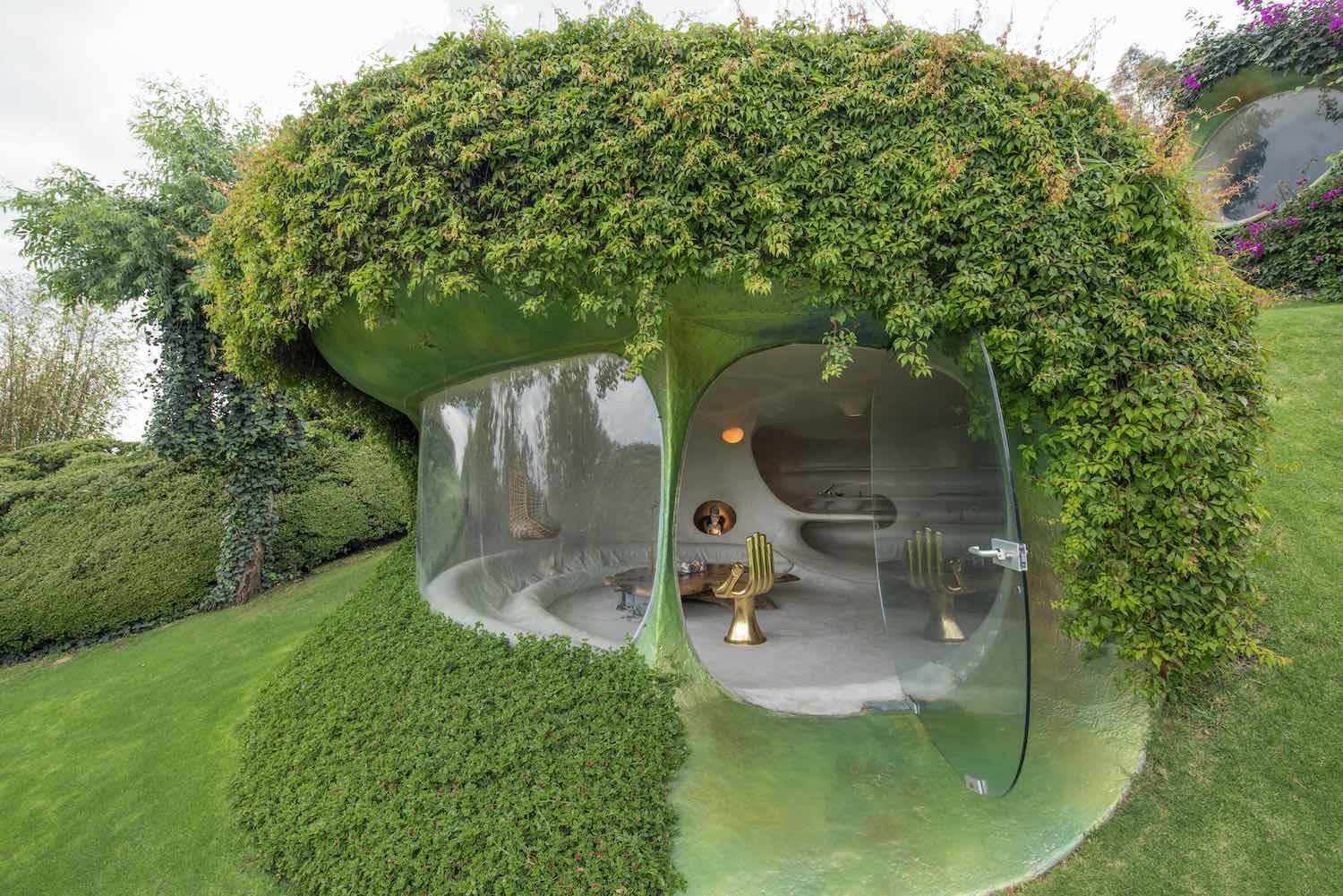 Architect’s Statement: The idea for the project was first conceived and took its likeness from a peanut shell: two roomy oval spaces with a lot of light, connected by a low, narrow, dimly lit passageway. The idea for this proposal was based on the elemental functions required by man: a place to live and fellowship with others, which would include a living room, dining room, and kitchen, and another place for sleeping, with a dressing room and bath. The original concept is embodied in two large spaces: diurnal and nocturnal. 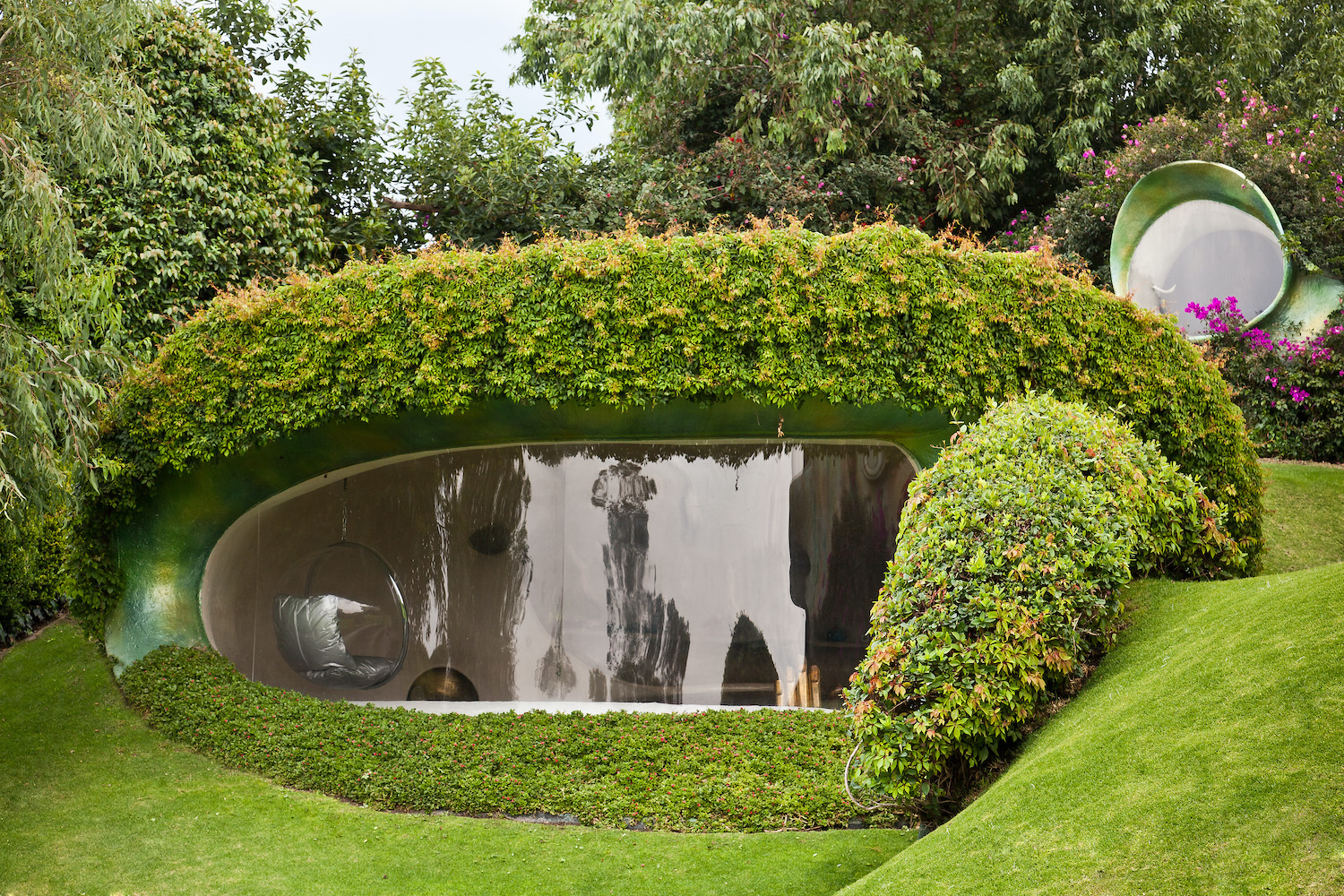 The house was designed with the desire to feel, when one enters, like he is going underground, conscious of how singular the space was, without losing the integration of the inside with the green, natural landscape outside.

Once the topographic study was finished, the location of trees was given special attention so that they would not have to be moved or taken out altogether to make room for the structure. Several clay models were created, one dedicated to the analysis and design of the shapes, volumes and spaces outside and the other to plan the inside spaces. Both of these models were developed throughout the course of the entire project with the interest and intensity of an important sculpture. 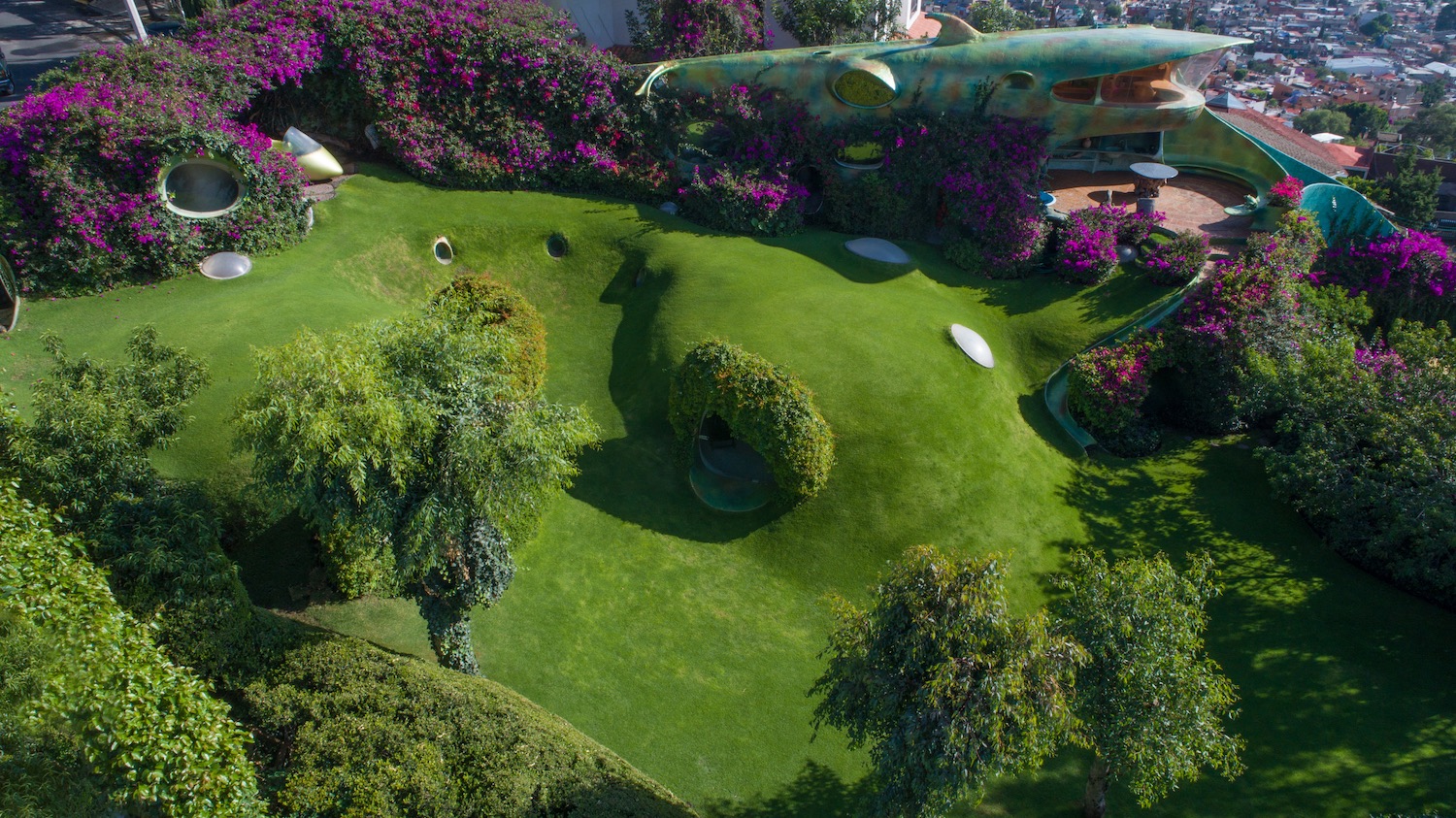 The first lines were drawn a little like lyric painters might have drawn them, allowing the lines to curve and move at will while playing with free forms, then turning the compass and giving the curved ruler free rein. In other words, the sinuous wall is serpentine in nature, winding and wrapping itself around free spaces thereby bringing about a playful process in the design, always seeking a southerly orientation as it moves around existing trees and slides down slopes. Like the music written by a composer, involuntarily but nevertheless consciously, it finally generated a form that reminds one of the soft materials an embryo is wrapped in. 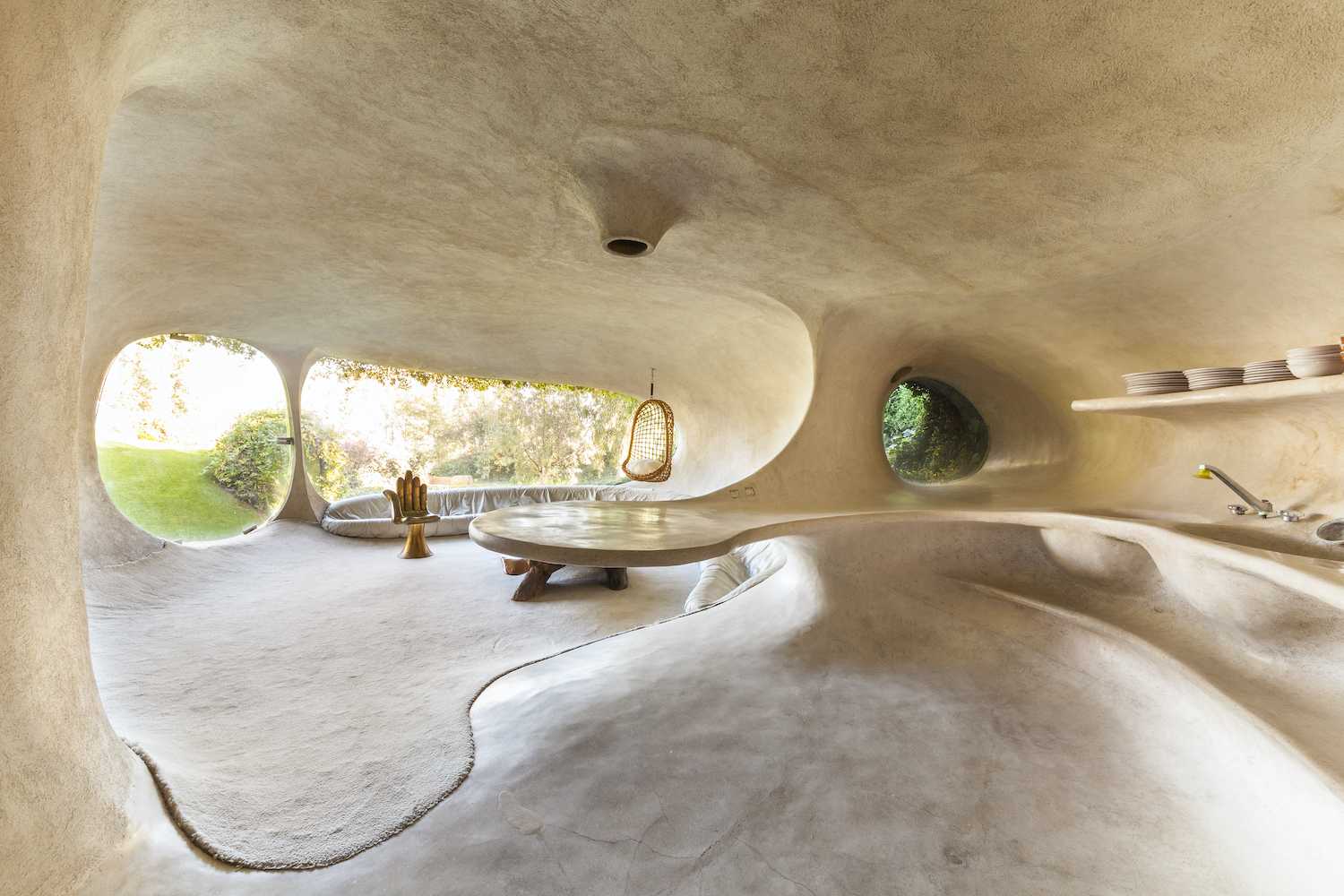 Once the construction stage was reached, a cross was drawn in the center of the property, which served as a reference for a system of Cartesian coordinates. This made placement of the center of the circles easier. Using this as a base, a hose, kept in place with stakes, was employed to outline the walls of the house.

This accomplished, a little soil was removed from the center of the wrapping to be utilized later to form small slopes. The end result looked like a skateboard park – continuously winding up and downhill. 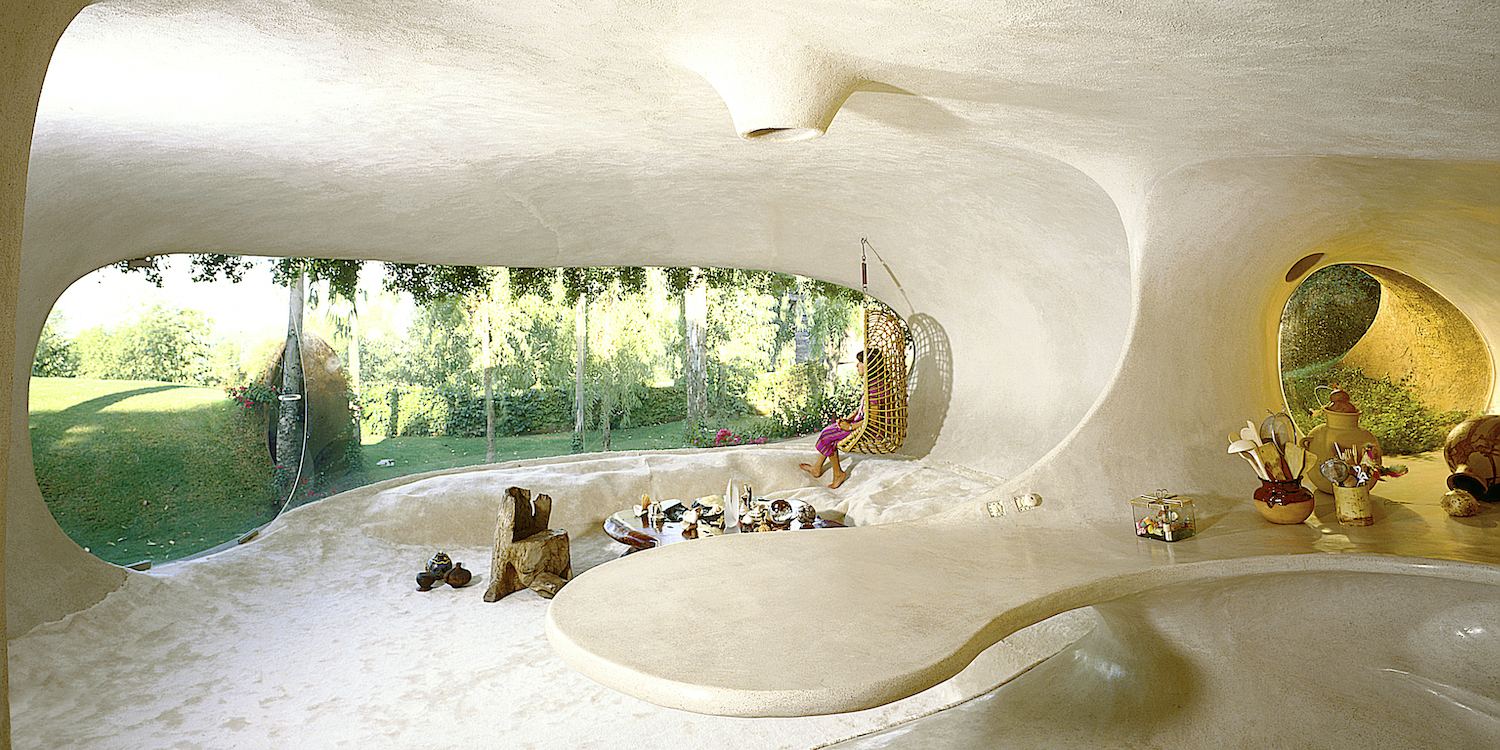 During the construction process, it became necessary to maintain the continuity of the original design. A pliable material was required, therefore, which would be much like the modeling clay used to make miniature models. Besides meeting the need for plasticity, it was evident that this pliable material must meet the requirements that would make it more than sculpturing clay. After a brief investigation, there was no doubt about it: ferrocement – resistant, pliable, and very elastic – was the answer. This material, which has its origin in reinforced concrete and was forgotten for a long time, promised to provide a monolithic sculpture.

The construction was begun by placing the frame for the ferrocement over the prepared foundation – the one that looked like a skateboard park – shaping the wrapper with a metallic frame. Iron rods bent into rings were placed inside, their height varying from one space to another. The rods were then rolled into a spiral shape.

When the framework was complete, two sheets of chicken wire, interwoven with each other, were connected to it, thus creating a base upon which the concrete could be sprayed. The ferrocement was pumped through a flexible hose using compressed air and was pneumatically projected onto the chicken wire frame with such great force and impact that the material was extremely compact, and its resistance was increased by approximately 30%. The end product was a shell about four centimeters thick, resistant because of its shape, waterproof, and very easy to build. A final, 3/4–inch coat of sprayed polyurethane was applied, which functioned as further waterproofing and insulation for the structure. 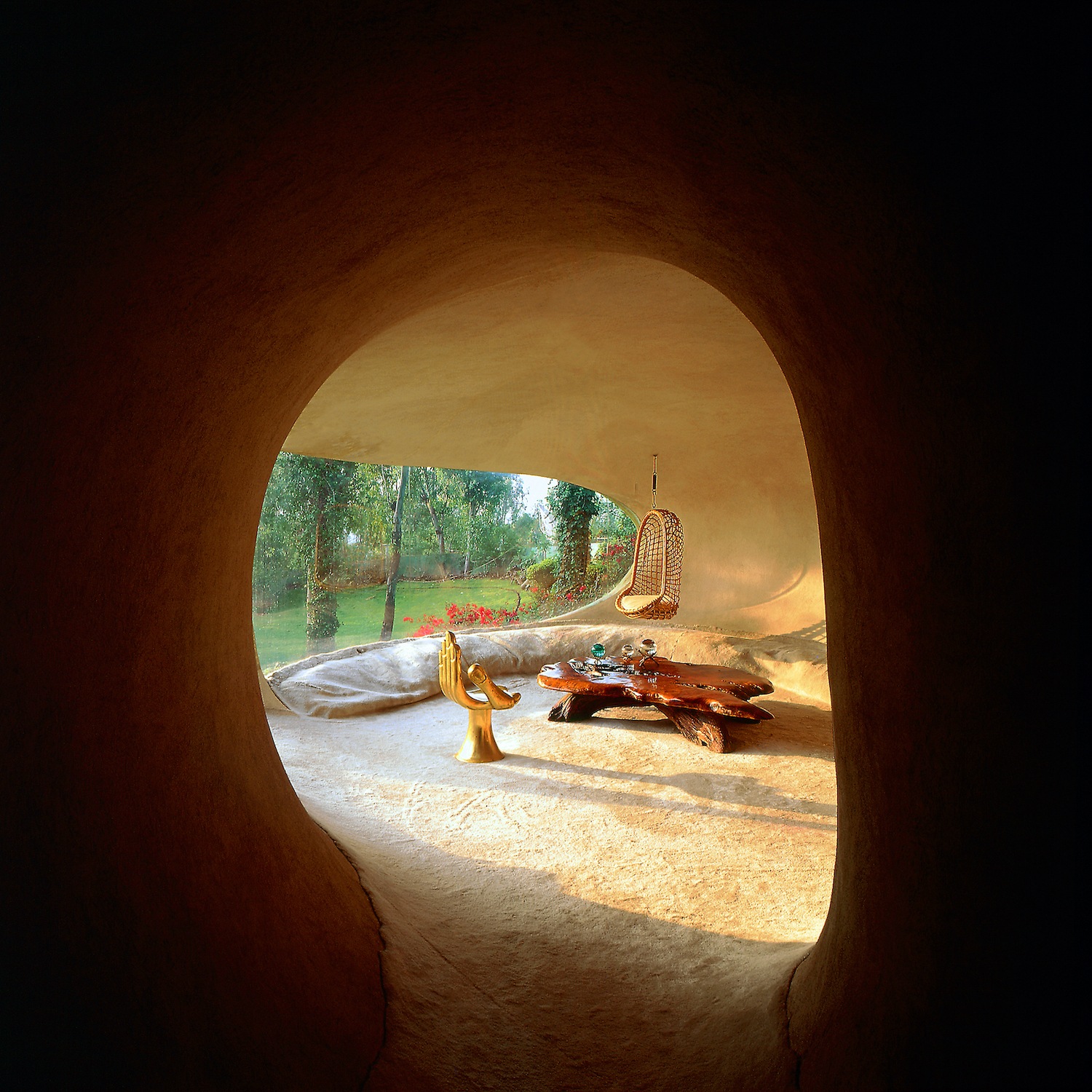 Once the framework of the construction was finished, the process of covering the building with soil was begun. Because a garden would be grown in it, the soil would have to be fertile. The idea was that the house would be covered with a garden, a concept that was borrowed from dwarf or bonsai trees which are cultivated based on the idea that the less soil supplied for growth, the less the plant will grow. It was, therefore, decided that the soil used would fluctuate between 20 and 25 centimeters in thickness. In that way, the grass would grow more slowly, thus reducing gardening efforts and costs. The dirt and the grass both protect the membrane of the structure from sunlight, wind, hail and the yearly wet-dry cycle, thereby preventing dilations and contractions which would cause fissures and lead to humidity. The green dune wraps itself around the inside spaces almost completely, rendering it almost invisible so that, from the outside, all one sees are grass, bushes, trees, and flowers. To take a walk in the garden is to walk over the roof of the house itself without even realizing it. 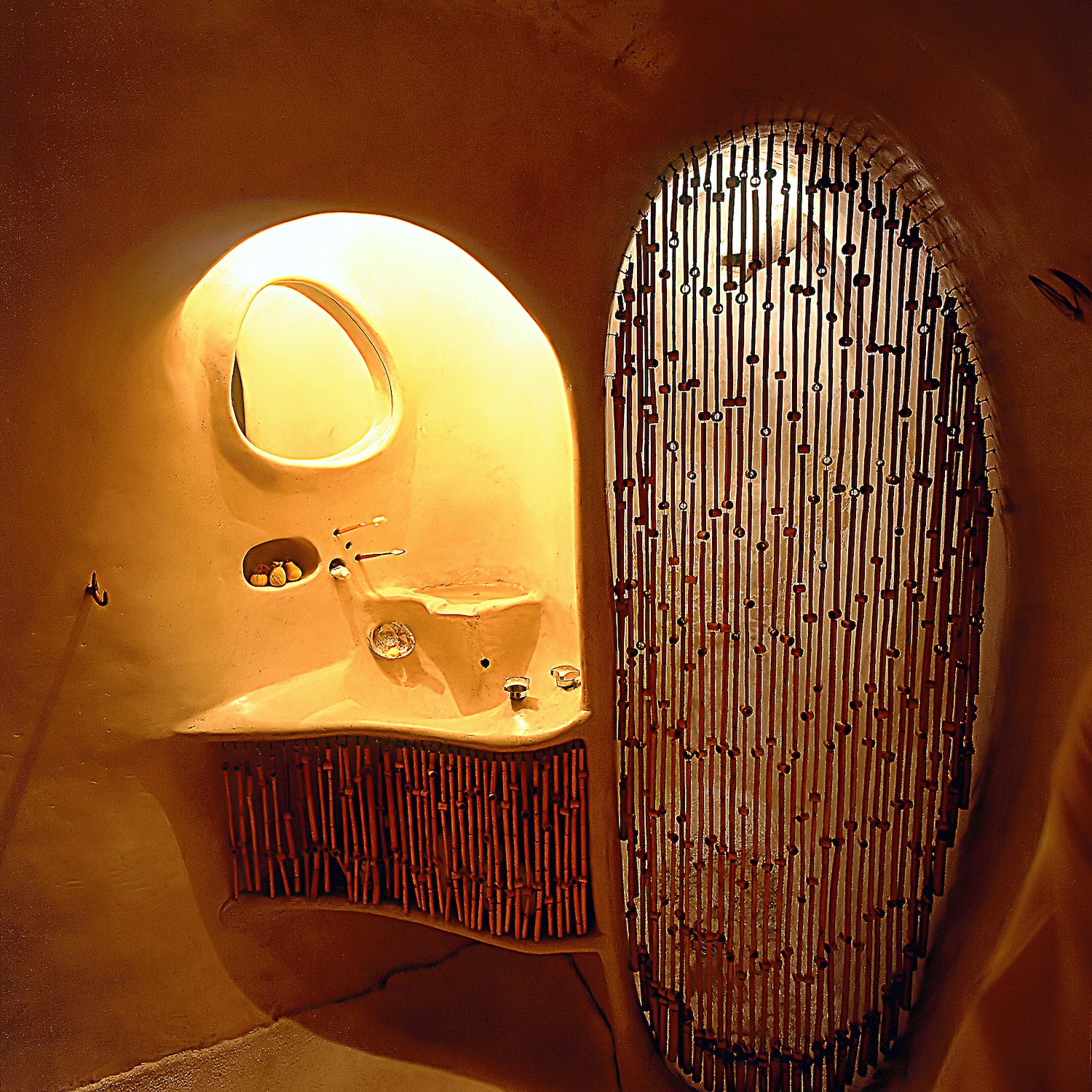 It was also considered of great importance to create conditions that would benefit the inhabitants of the house psychologically and physically by using “bio-climactic controls”. It is a well-known fact that to create or conserve a microclimate that will benefit human beings, one must begin with the outside of the home and then proceed inside. Along with all the other physical characteristics of the property, green barriers consisting of trees and bushes help filter sunlight, completely prevent penetration of solar rays, create shade that protects living beings from summer heat, provide protection from dust, and absorb noise pollution. Furthermore, the transpiration and evaporation emitted from plants and grass of all kinds refresh the air and increase absolute and relative humidity in the air closest to the surface, thus producing a conductive cooling off effect. It is important to emphasize that the soil and the sun work together to maintain a stable temperature inside the house: the earth shields the inhabitants from heat and cold while the sun illumines and warms. 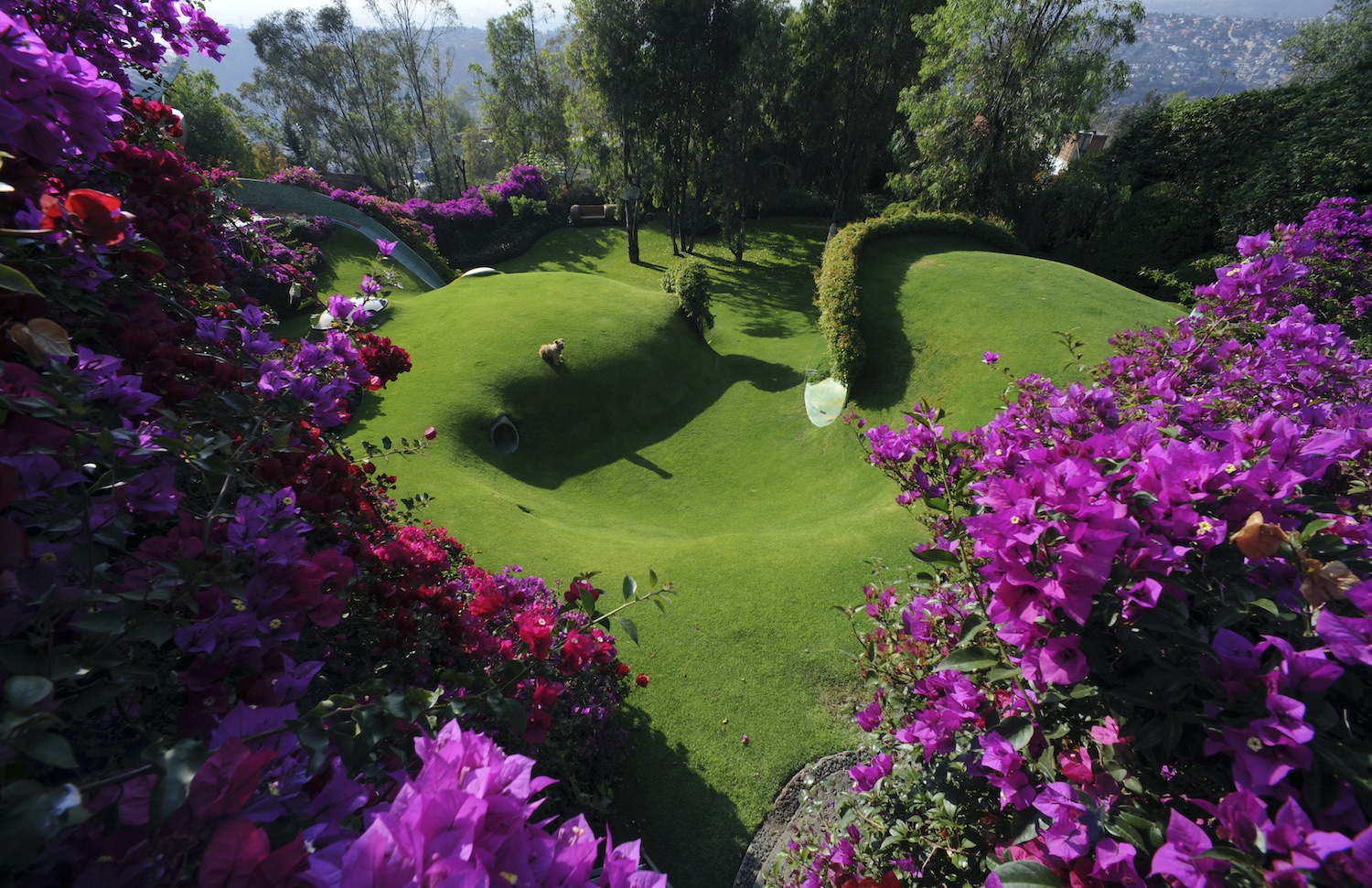 The windows of the house were placed strategically in places that would look out over the most pleasant parts of the garden, preferably toward the south so that sunlight would still be available in the winter, seeking light the way flowers do.

Contrary to what one might think, this semi-buried house turned out to be sunnier and fuller of light than a conventional house because the windows can be placed anywhere, and the domes allow the entrance of light and sun from above. Ventilation is facilitated by the aerodynamic form of the dwelling which allows free circulation of air throughout. 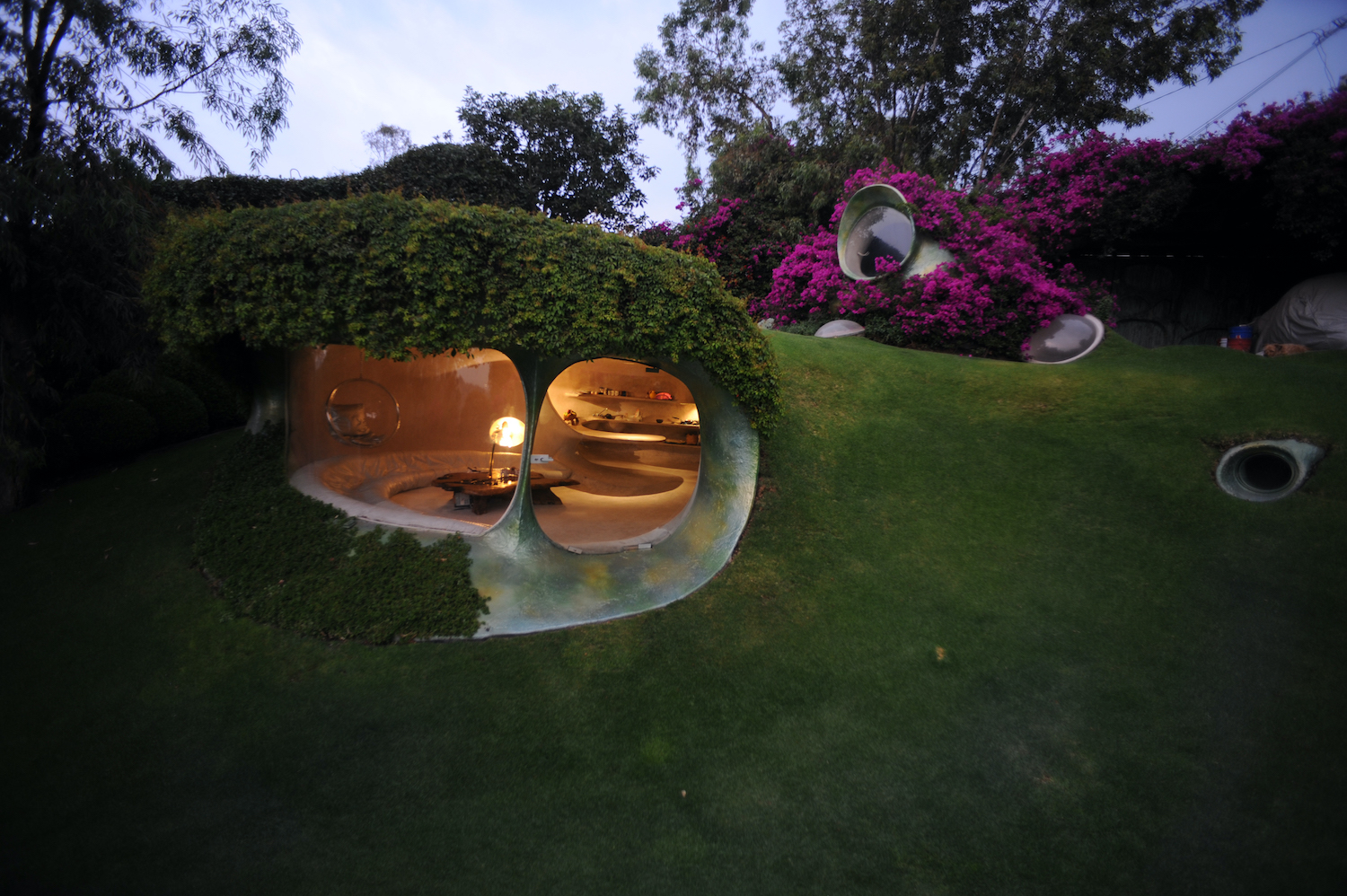 Semi-buried houses, just like our body temperature, remain stable in spite of changes in the weather outside. The soil acts like the skin – a moderator that controls variations in temperature by preventing the cooling and warming effects of the weather outside from rapidly or immediately changing temperatures inside. Temperatures inside and out turn out to be totally opposite from each other. The effect is such that when the hot summer arrives, temperatures inside are cool, and when the cold winter comes, temperatures inside remain warm. This means that the soil that covers the house will heat up when winter arrives and cool down when summer comes, thus maintaining a constant temperature of 18° to 23° centigrade (64° to 73° Fahrenheit) all year long, keeping the house warm in the winter and cool in the summer. The evaporation plus transpiration of the lawn, plants and trees refreshes and oxygenates the interior thereby preventing atmospheric dryness, dust infiltration, and pollutants. A relative humidity averaging between 40% and 70% is conserved all year long in this microclimate. In other words, the green, vegetable epidermis functions like a nose that filters dust and at the same time maintains stable temperatures and a relatively comfortable level of humidity inside; all of these characteristics help keep the inhabitants free of respiratory problems and ailments. 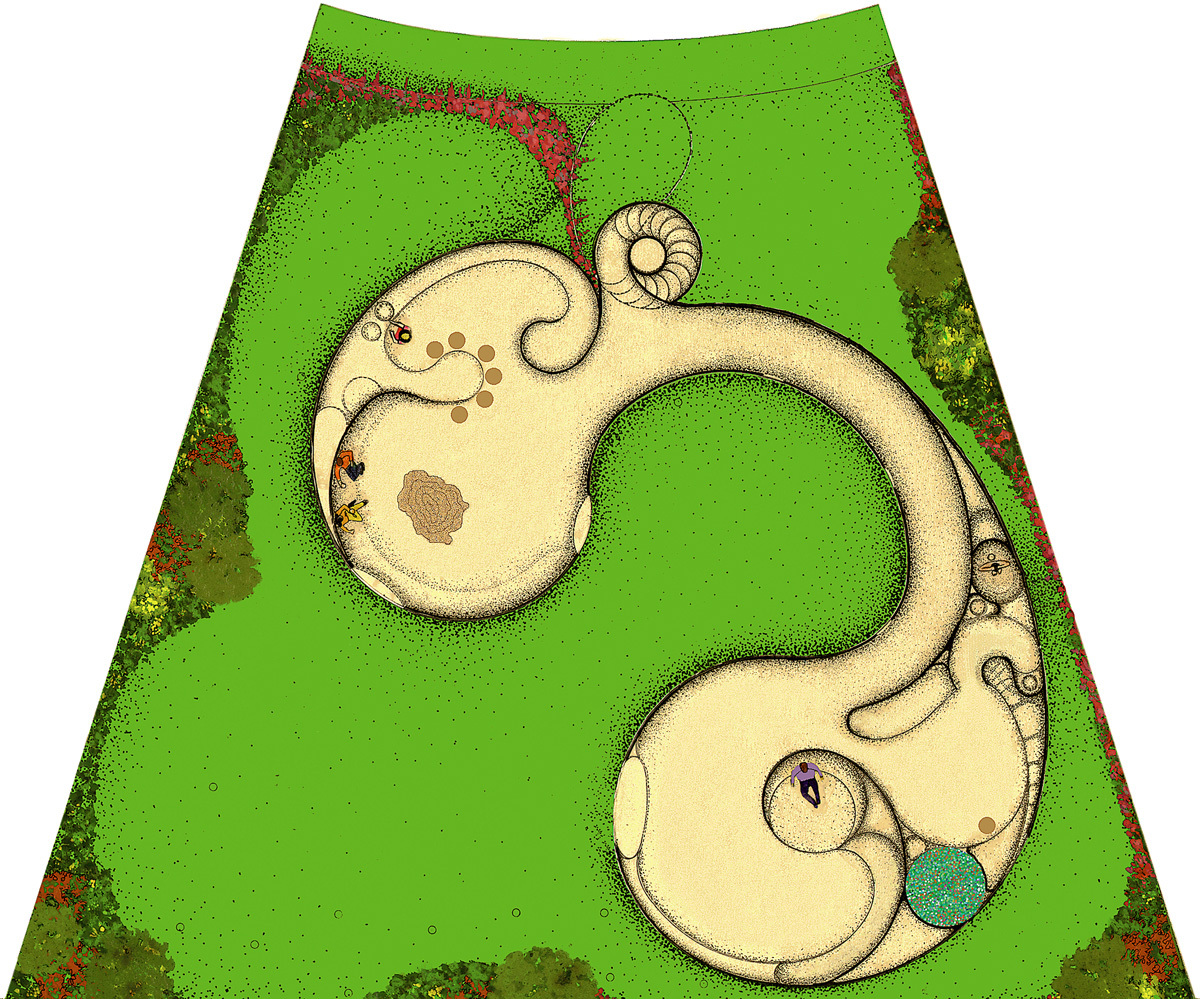 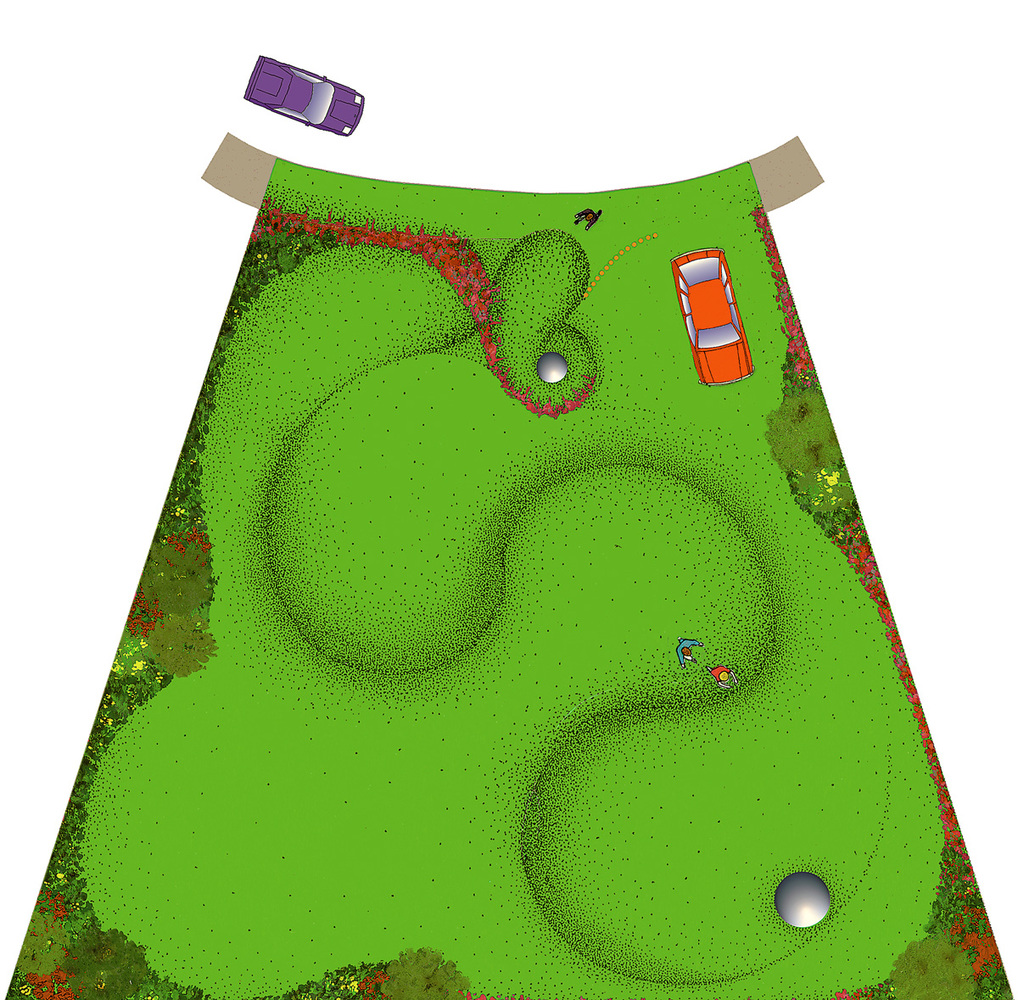 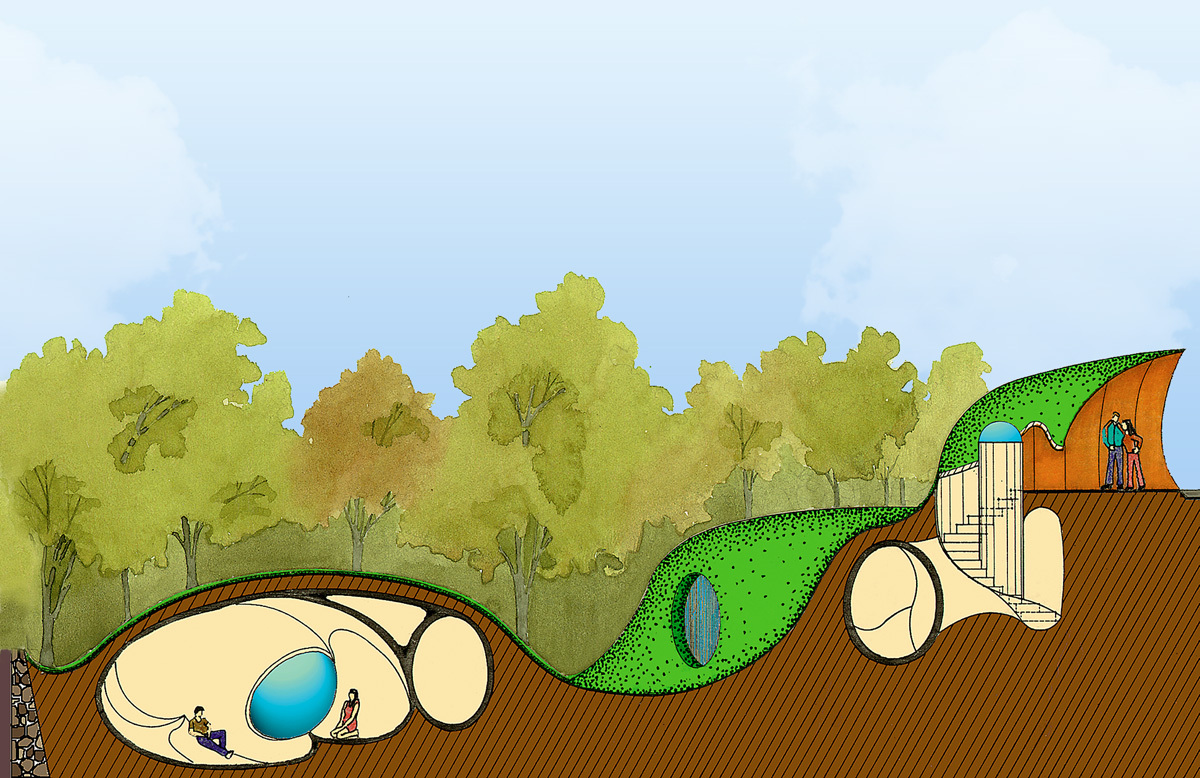 The Tree House in Celaya, Guanajuato, Mexico by Javier Senosiain 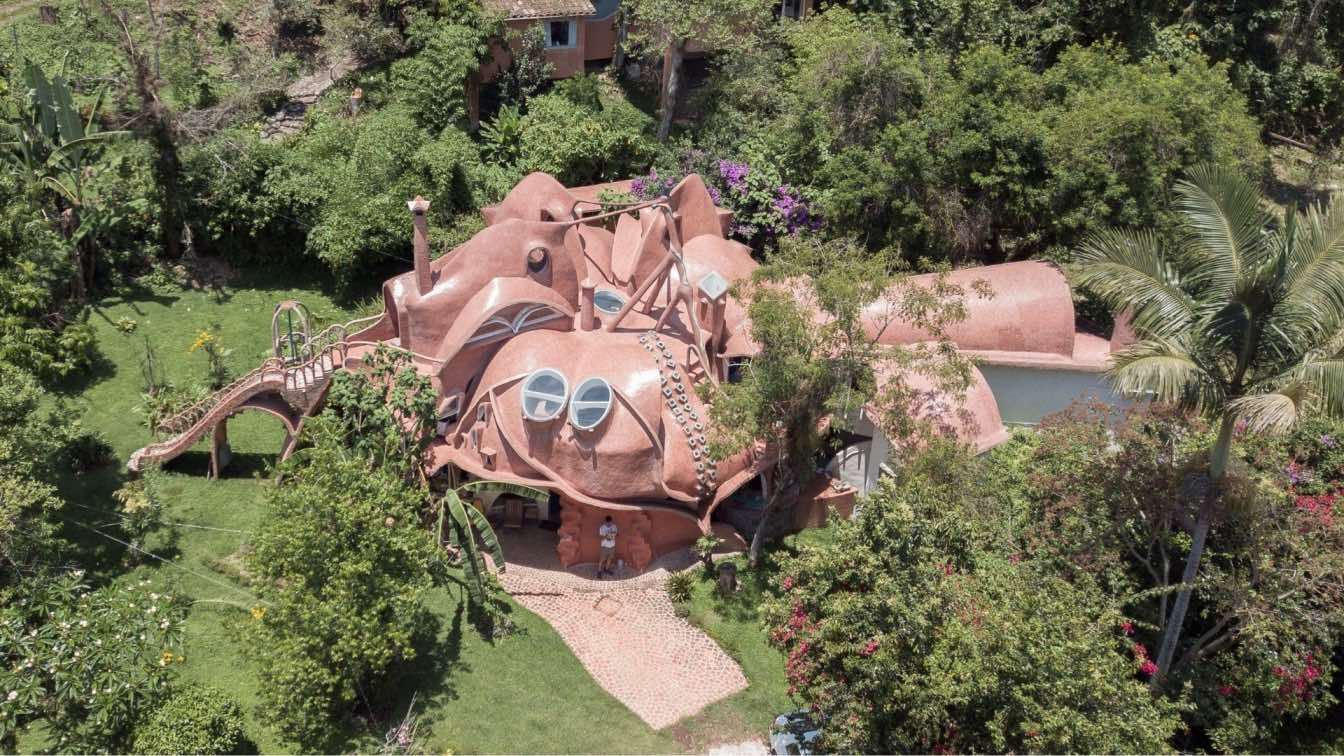 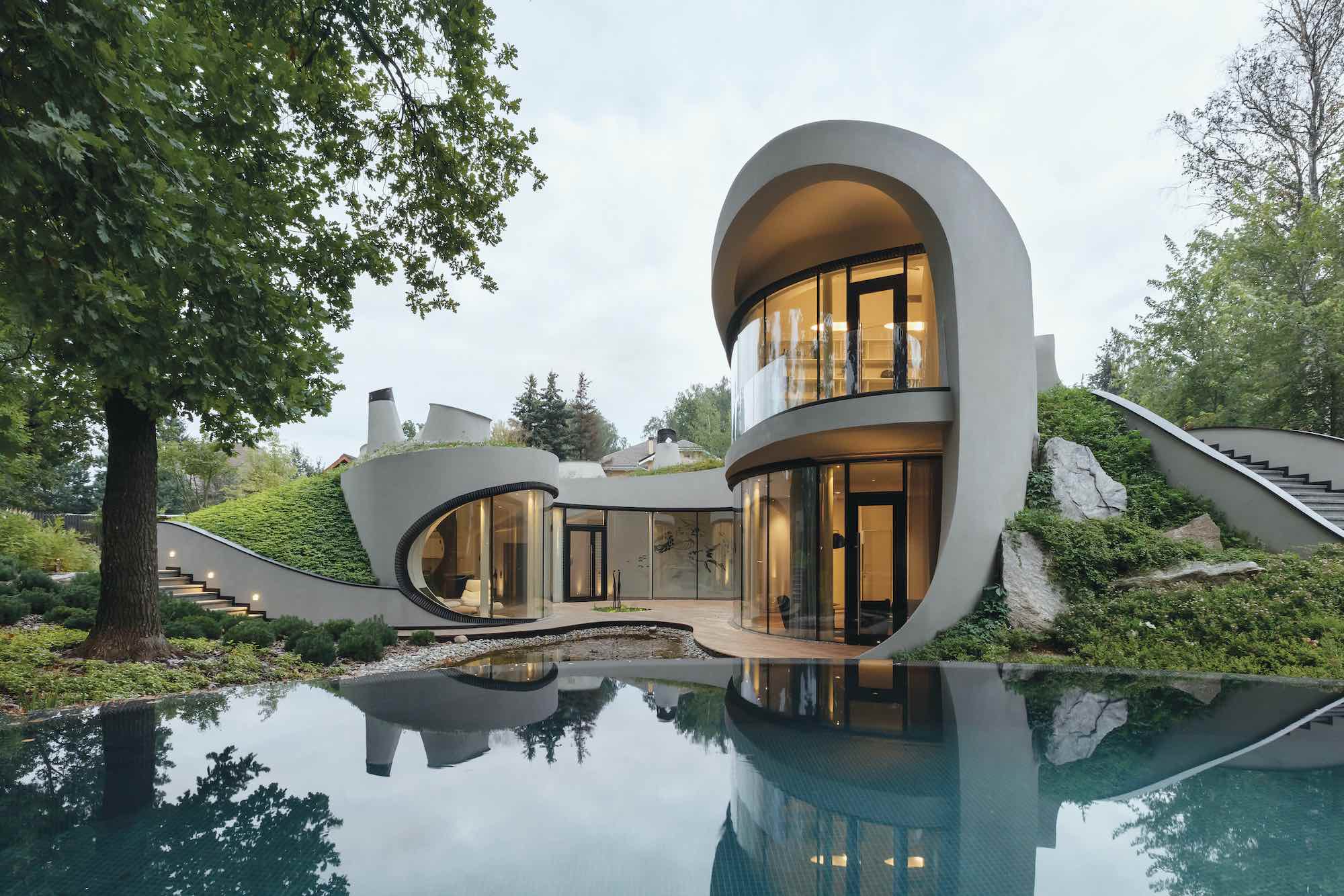 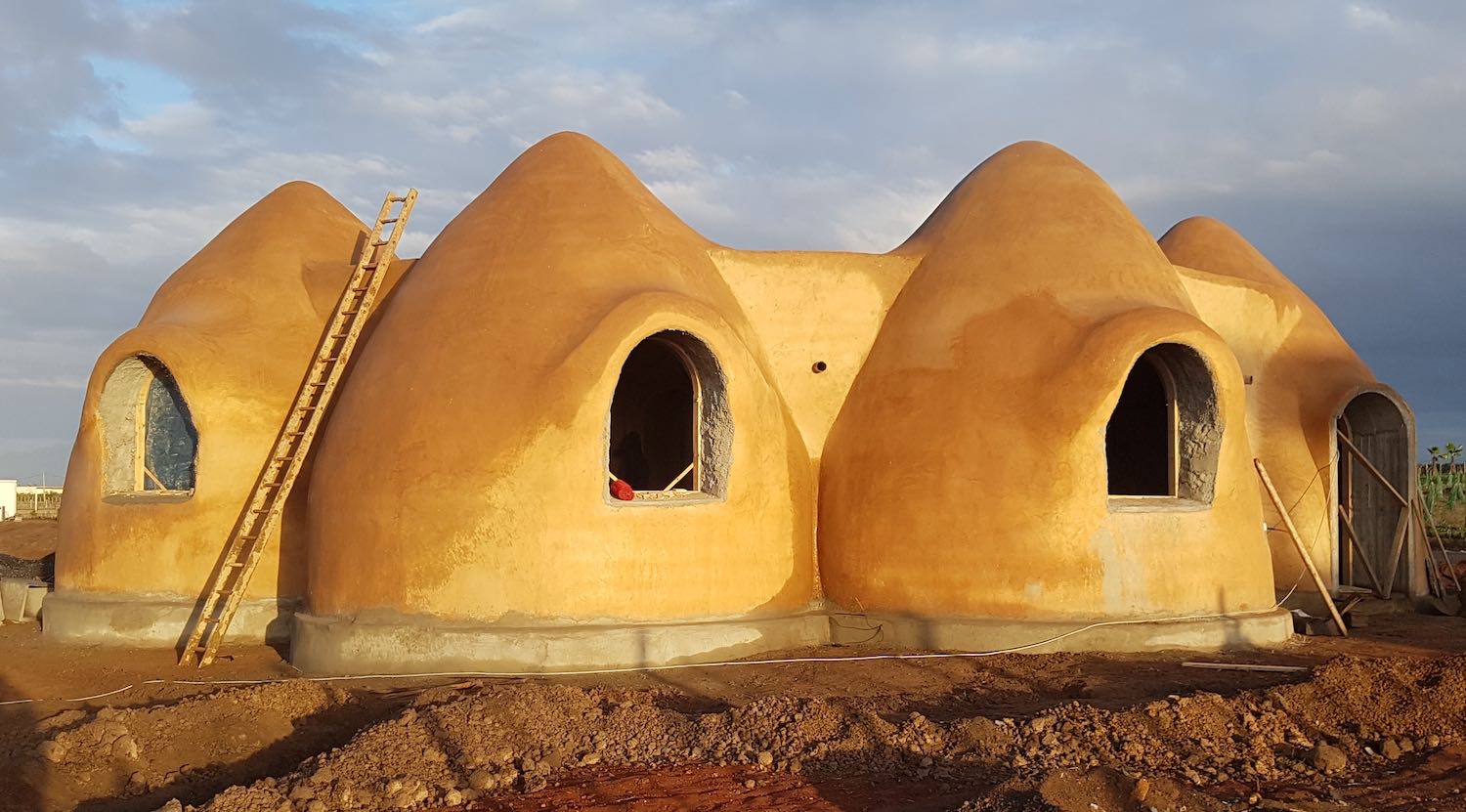