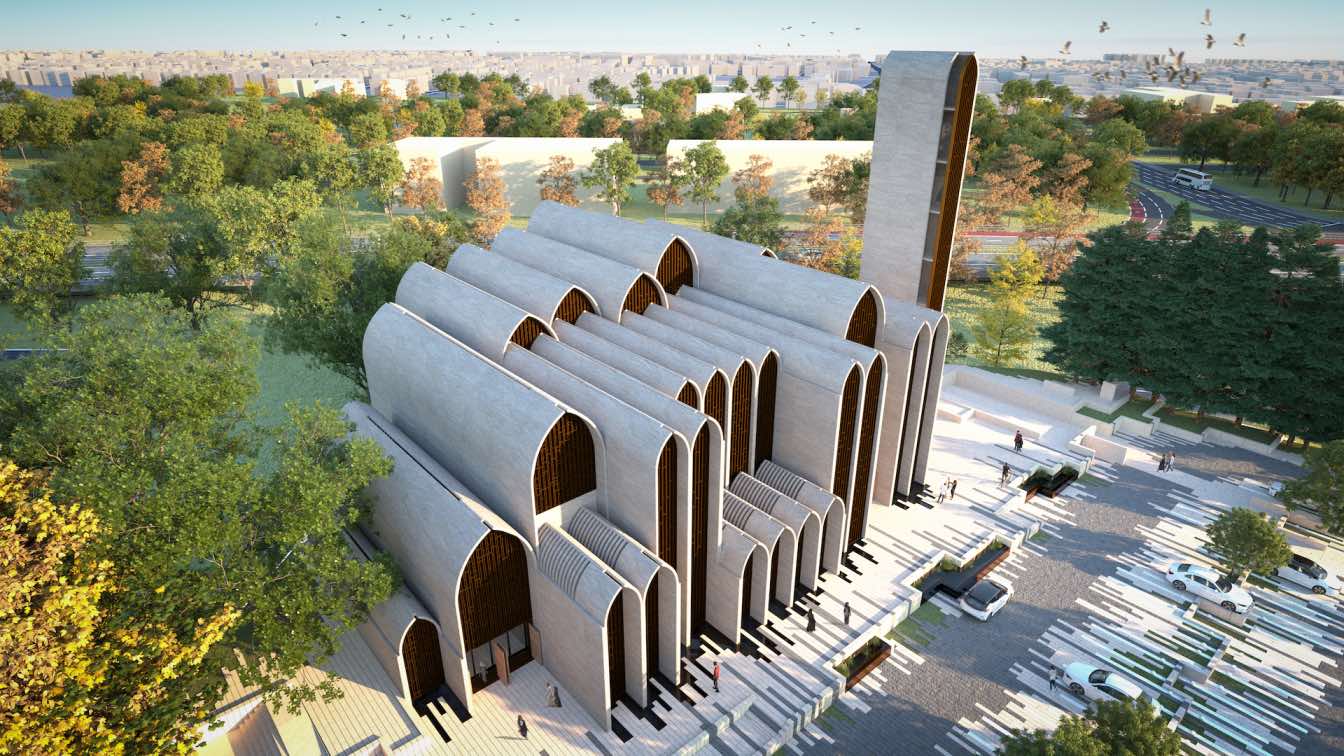 The Mexico City-based architecture firm AIDIA STUDIO released their design for the New Preston Mosque which was part of the International RIBA Competitions.

Architect's statement: The task of designing a place of worship, regardless of the faith, is a phenomenal challenge for any architect. For us as a team, this endeavour triggered a deep and lengthy journey into the history of humanity, the evolution of religion, the rise of Islam, its proliferation around the world along with the vast examples of architectural expressions that have enriched our towns and cities.

Perhaps more importantly beyond our fascination with the architecture of mosques, we cherish the opportunity to contribute to a new age of Islam in the U.K., a new age of inclusiveness, tolerance, and dignity and we truly believe that there is no better vehicle to drive that effort of dignification and acceptance than contemporary architecture with its ability to materializing ideals into innovative physical spaces. 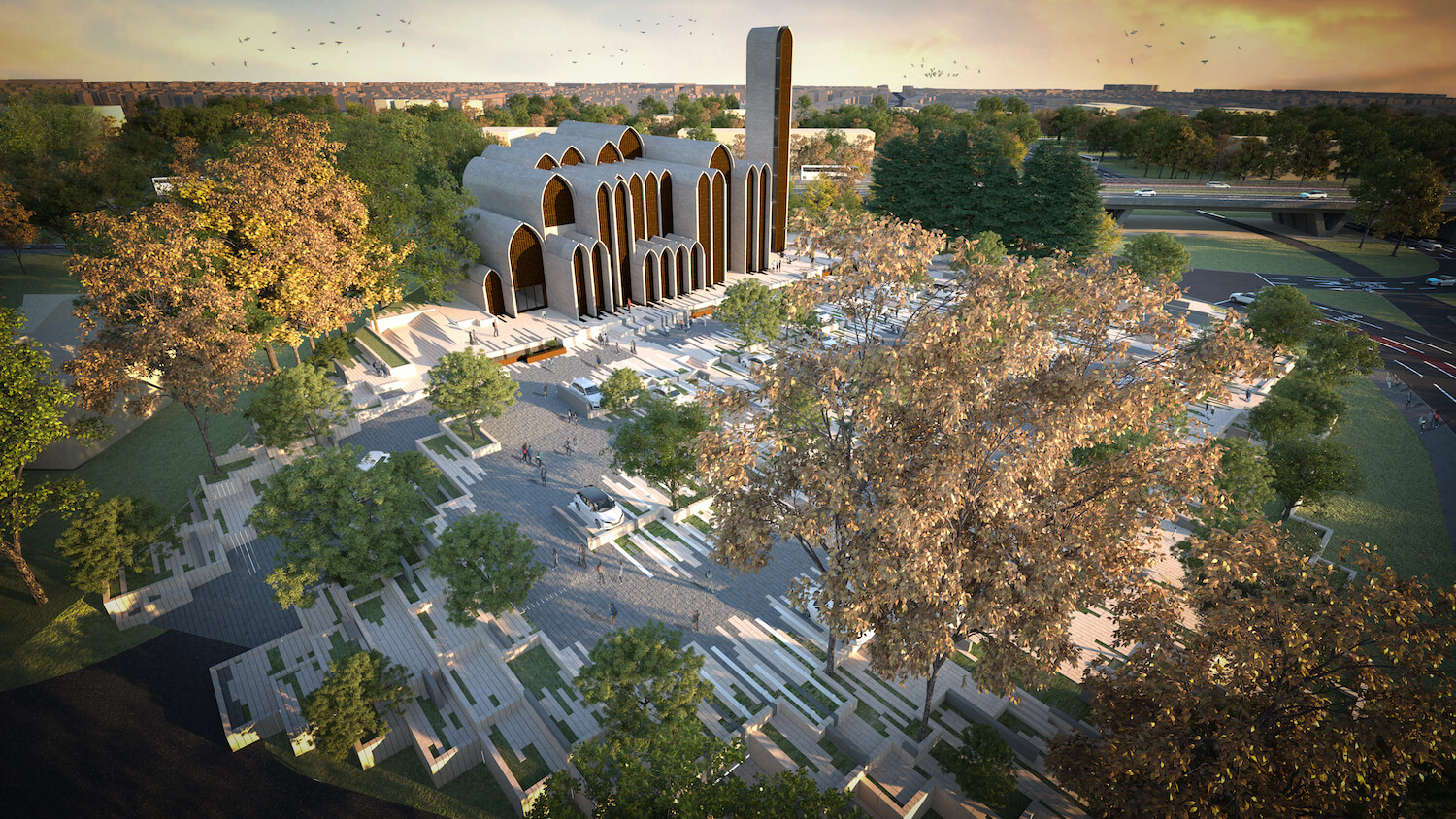 Site -The Rite of Ascending.

Our approach places the mosque at the highest point on the site, in doing so, apart from cultivating the symbolic gesture of the ascendance, we are able to define a journey which starts in the landscape, continues through the main access, cloak room and ablution and culminates in the prayer room. It seems appropriate that this ceremonial hall, be the most guarded space of the complex, at the highest point on the site and shielded away from the cars.

Qibla -Everything in Alignment.

We have embraced the requirement to orientate the mosque towards Mecca by extending this axis across the site into a design grid where all elements, architectural, structural and landscape are aligned in a holistic manner. This 4.8m grid provides a suitable framework for laying out the car parking and the pillars supporting the mosque’s vaults.

A Fractal System of Pointed-Arch Vaults.

Our architectural journey rescues the quintessential archetype of Islamic Architecture, the pointed arch. This centuries-old building feature transcended its origins in Persia and India and migrated into Europe where it was quickly embraced across cultures during the gothic period. The pointed arch is structurally much more efficient than the rounded arch, and when turned into a vault it is able to span large distances clearing the floorplan from columns and other heavy load bearing elements. We have devised a vault system of fractals which negotiate, subdivide and adapt to specific programmatic requirements. These vaults could be constructed out of reinforced ground natural stone or could also be casted in glass fibre reinforced concrete (GRC). By being a modular system, they would be able to be manufactured in series locally or regionally. 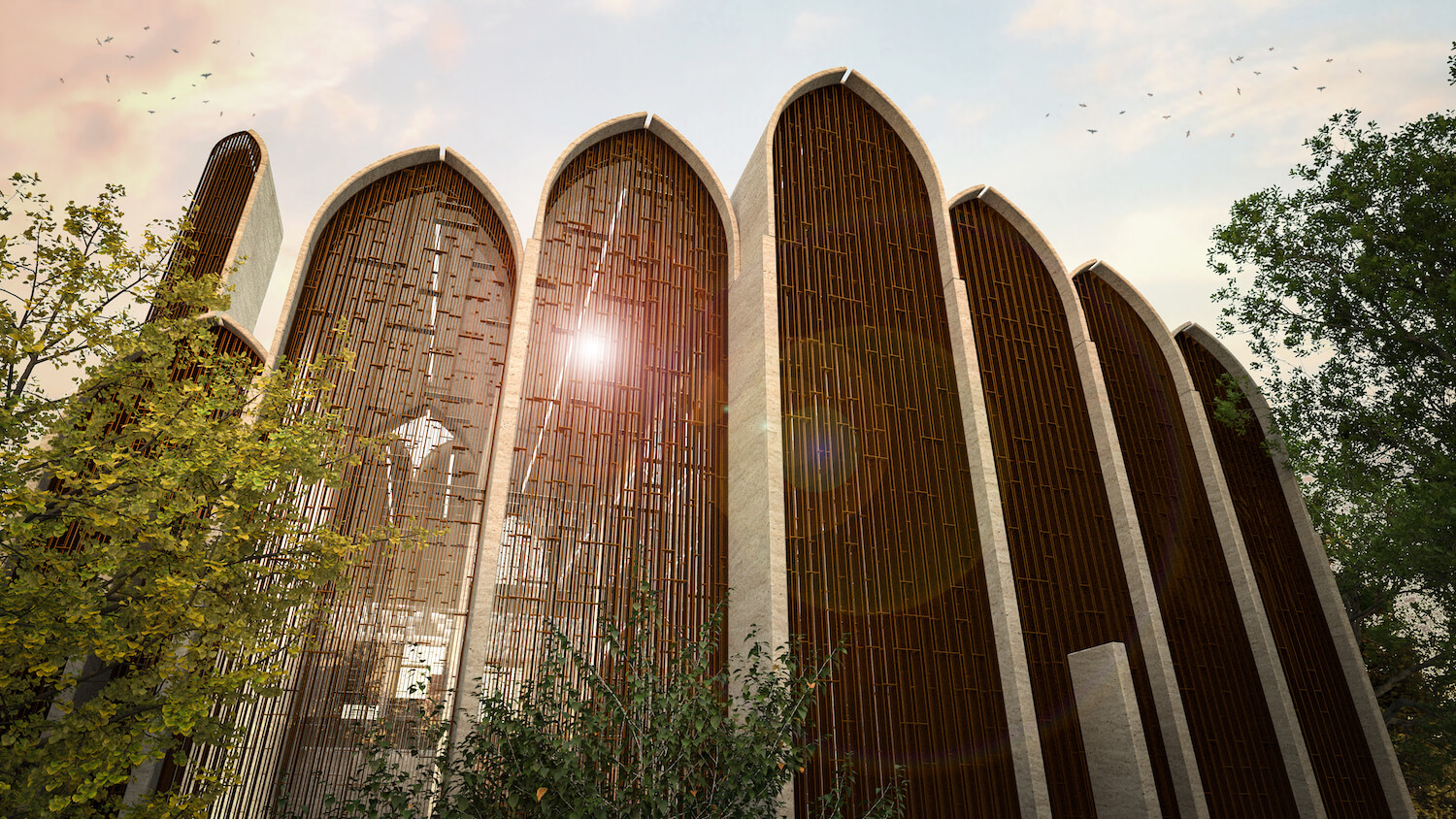 Possibly one of the biggest challenges we faced was to design a car parking which doesn’t resemble one. Our approach aims to blur the boundary between parking and landscaping, and we do so by establishing a playful array of shifting slates, plates, and benches. We draw our inspiration from the Islamic gardens which are characterised by an intricate play of geometric patterns on multiple levels targeting the human senses through water features, fields of flowers, singing birds and shading elements. Along the edge of the site, a cascading array of planters blend with the surroundings.

One of the most fascinating aspects of Mosque design, is the materialization of a ritual into a significant ceremonial experience. We have aimed to provide an effortless intuitive, sequential flow from the time the user enters the building, checks-in their coat and umbrella, removes their shoes, proceeds to cleansing to finally entering the prayer hall. We have achieved a linear flow where paths of clean and dirty don’t overlap.

In designing the ablution, we have aimed to go beyond the pragmatism of the washing requirement by rescuing the beauty and ritualistic significance of the cleansing. In this space, the sound of running water from a centralized fountain fills the space along with the effect of sun rays piercing from the skylight, as water washes your body, light purifies your soul. A celebration of a ritual, a poetic moment. 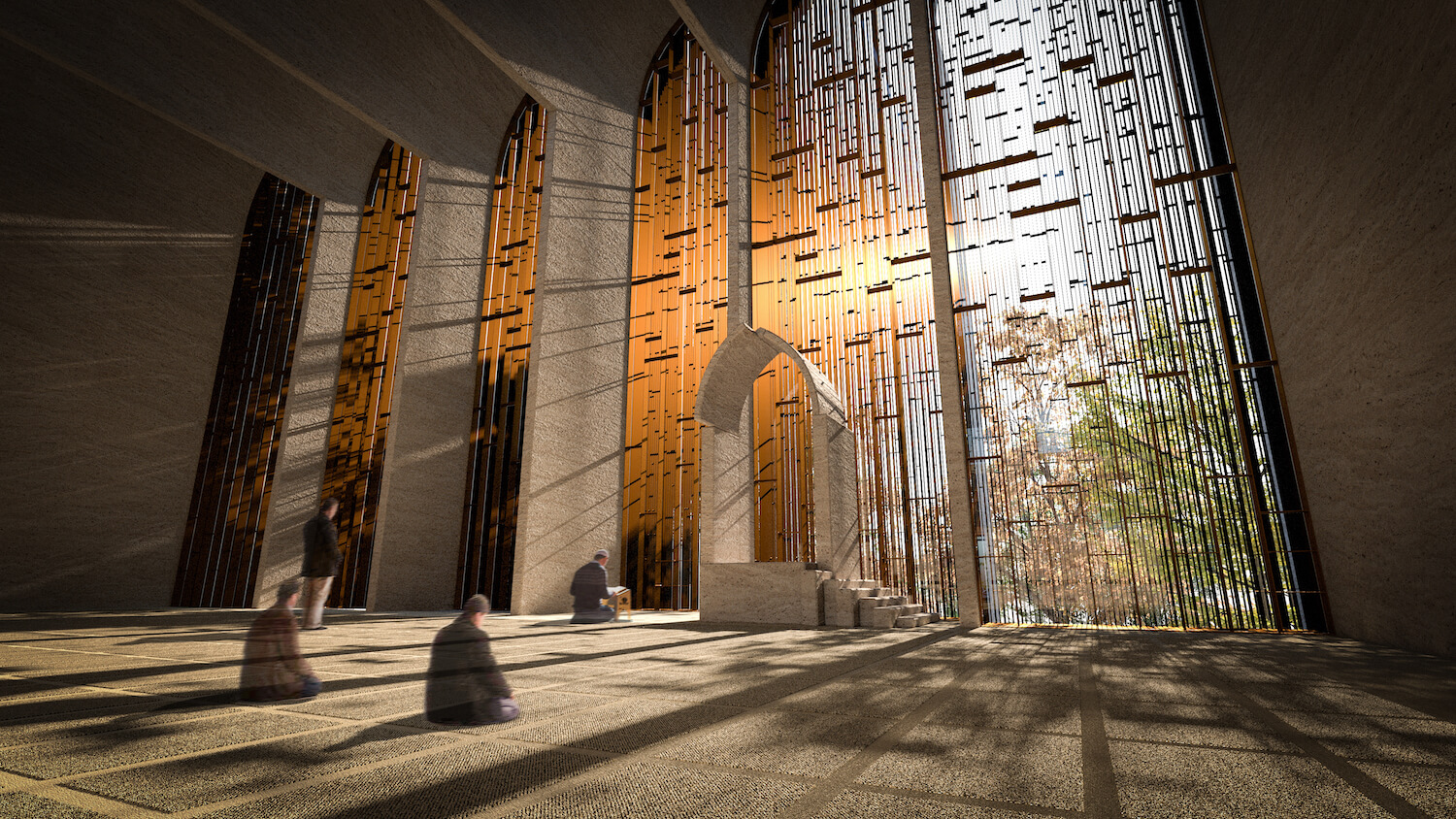 Perhaps the most poetic of all Islamic architectural archetypes, the mashrabiya filters the light and sets the stage for a dimmed ceremonial atmosphere. We have designed a pattern which reinforces the fractal linearity of the overall scheme. The mashrabiya cassettes, intended to be casted bronze, close the vaults along the NW-SE axis creating a kinetic play of lights and shadows across all three levels of the mosque.

Minaret, A Beacon for Preston.

Apart from diffusing the call to prayer, the minaret works as an observation point of Preston. At 32m of height it will be visible from the near periphery and all major approaching roads. The aim is to make it a distinctive element and a landmark for Preston.

According to the Centre for Social Investigation at Nuffield College, poverty is a much more common experience among Muslims than other religious groups in the UK. It is estimated that 50% of Muslim households are in poverty compared to the national average of 18% (based on data collected between 2009 and 2011).

With this in mind we believe that the new mosque in Preston will play a much bigger role than solely a place of worship, it has the potential of forging the collective links that help an entire community to lift itself from poverty and claim their place in a forward looking, multicultural British society. 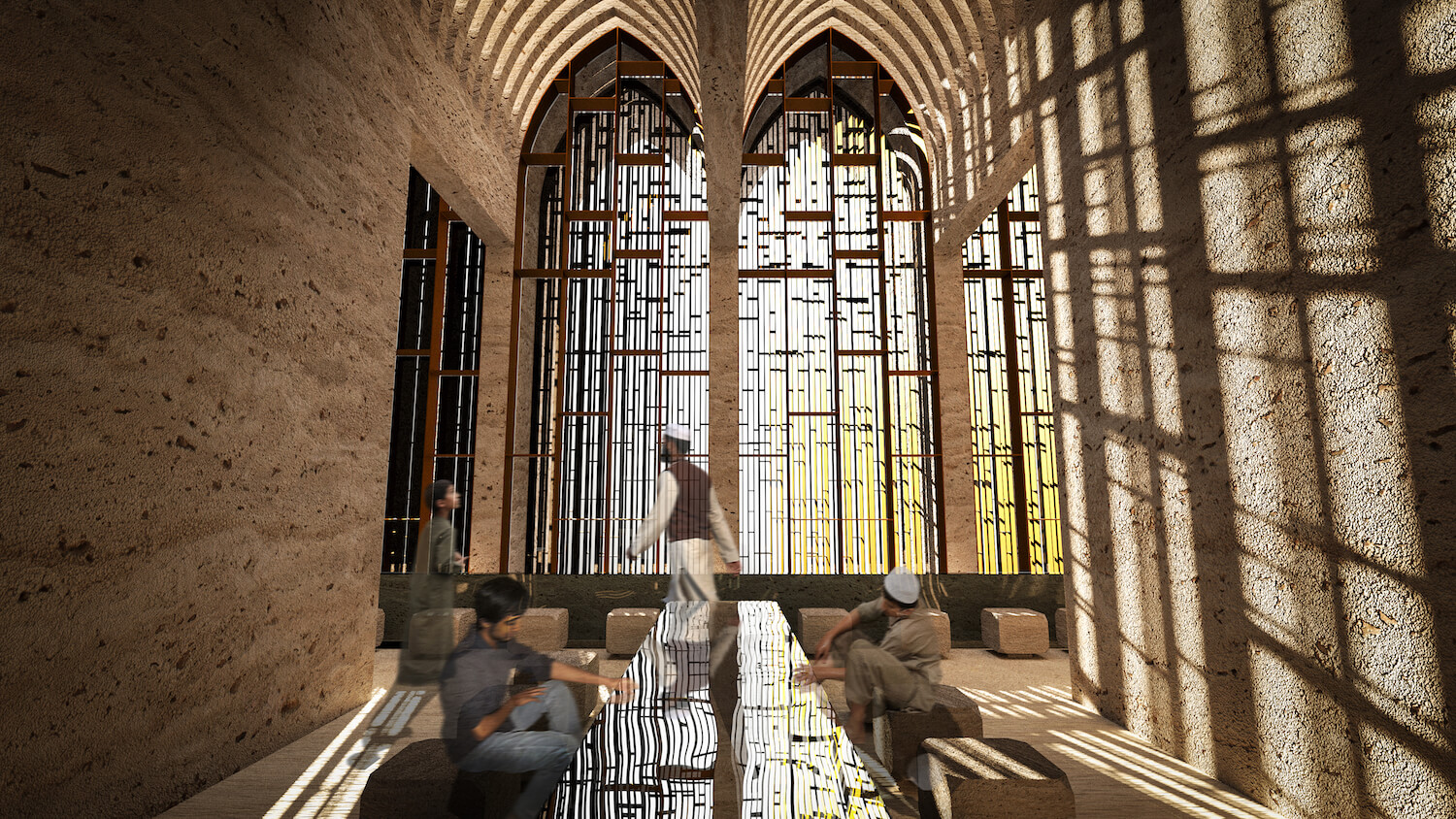 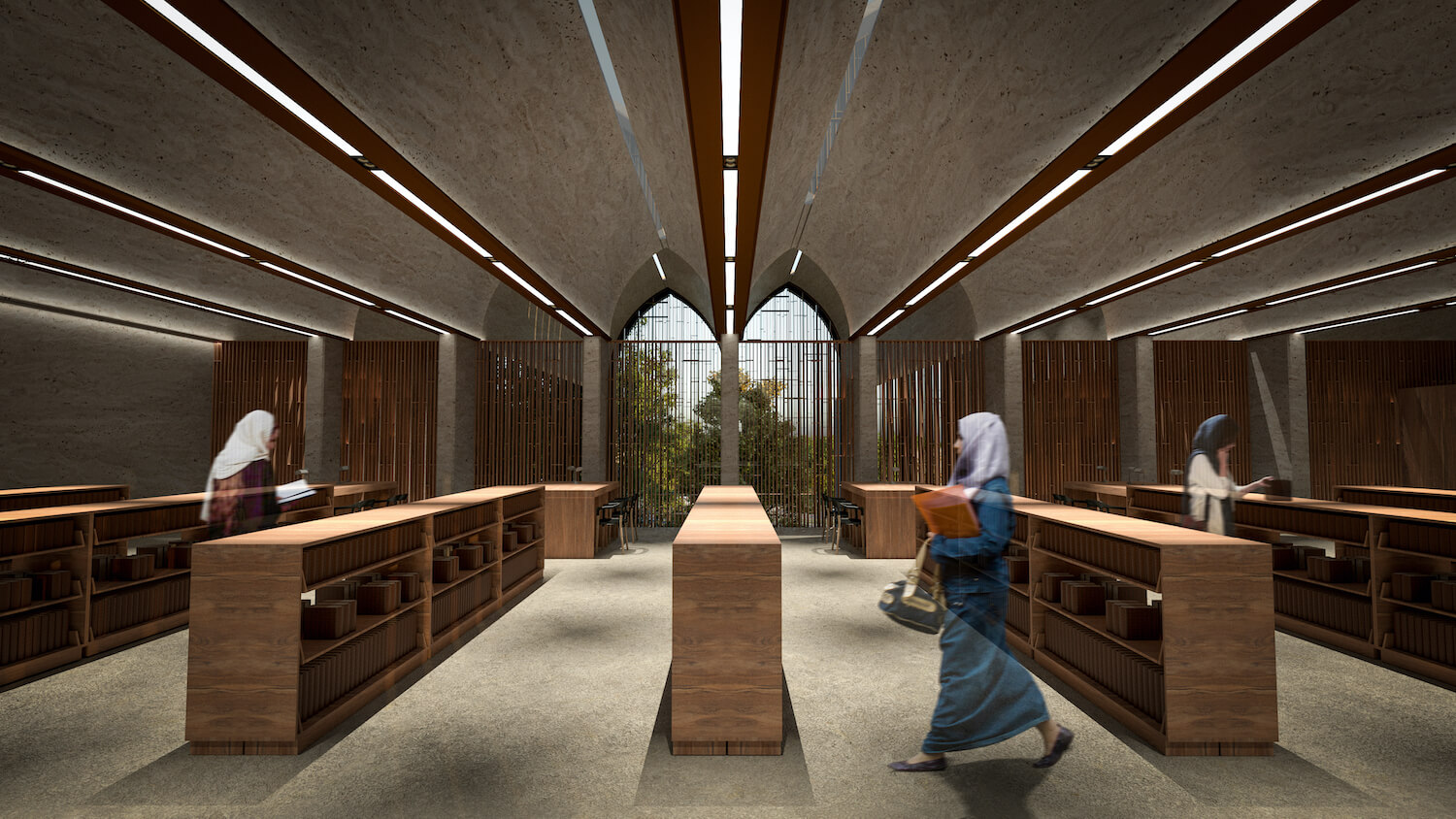 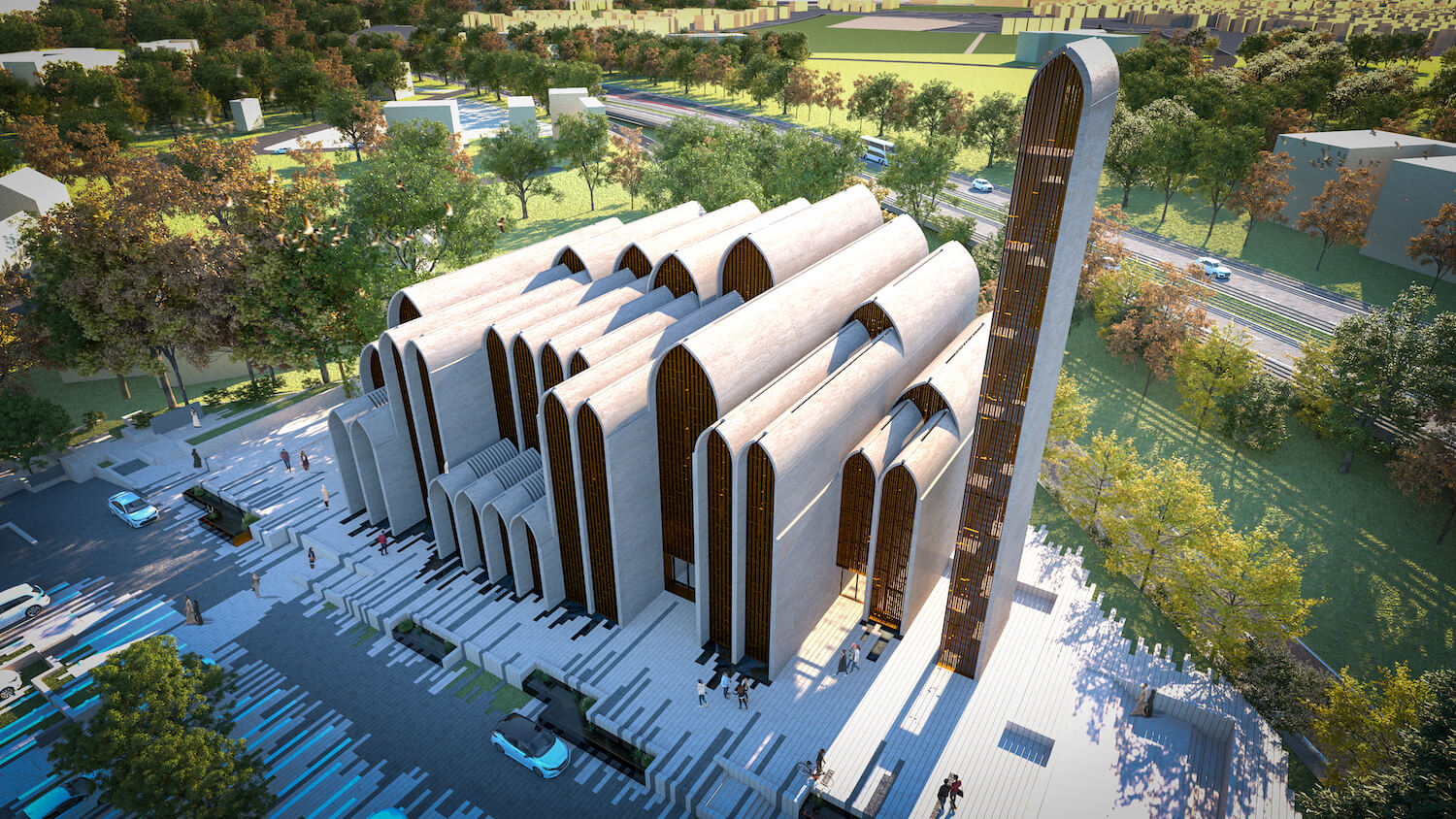 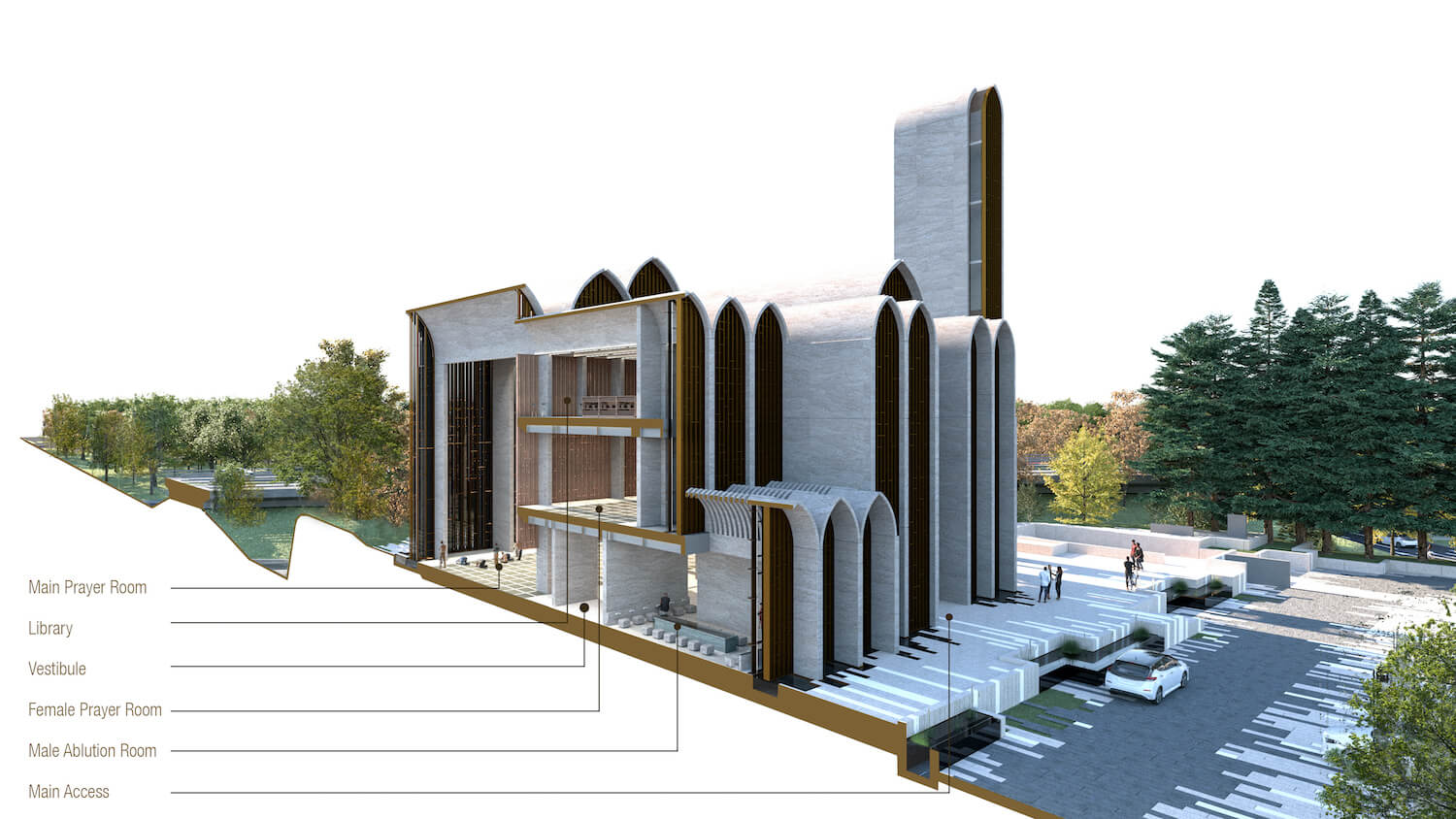 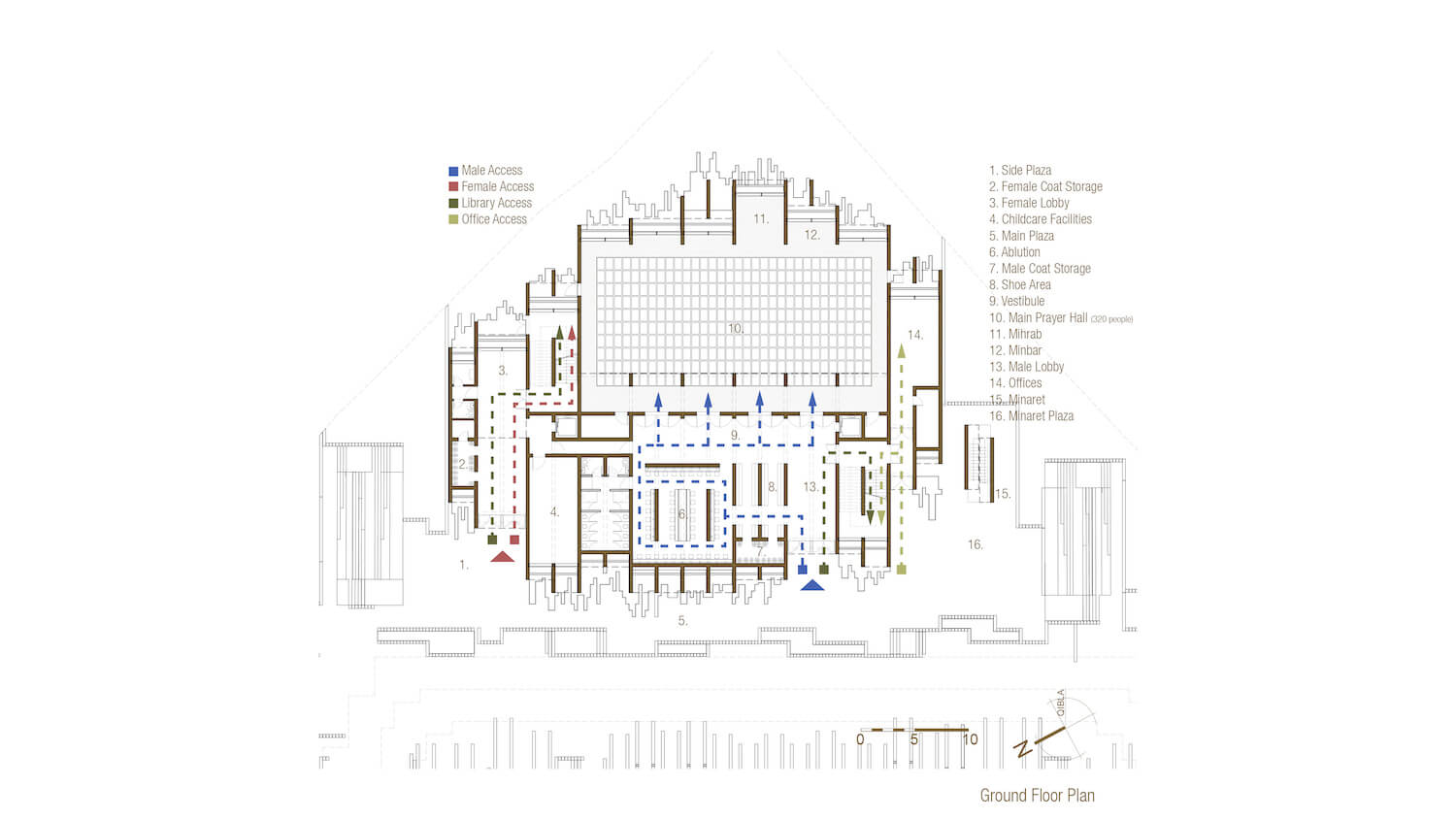 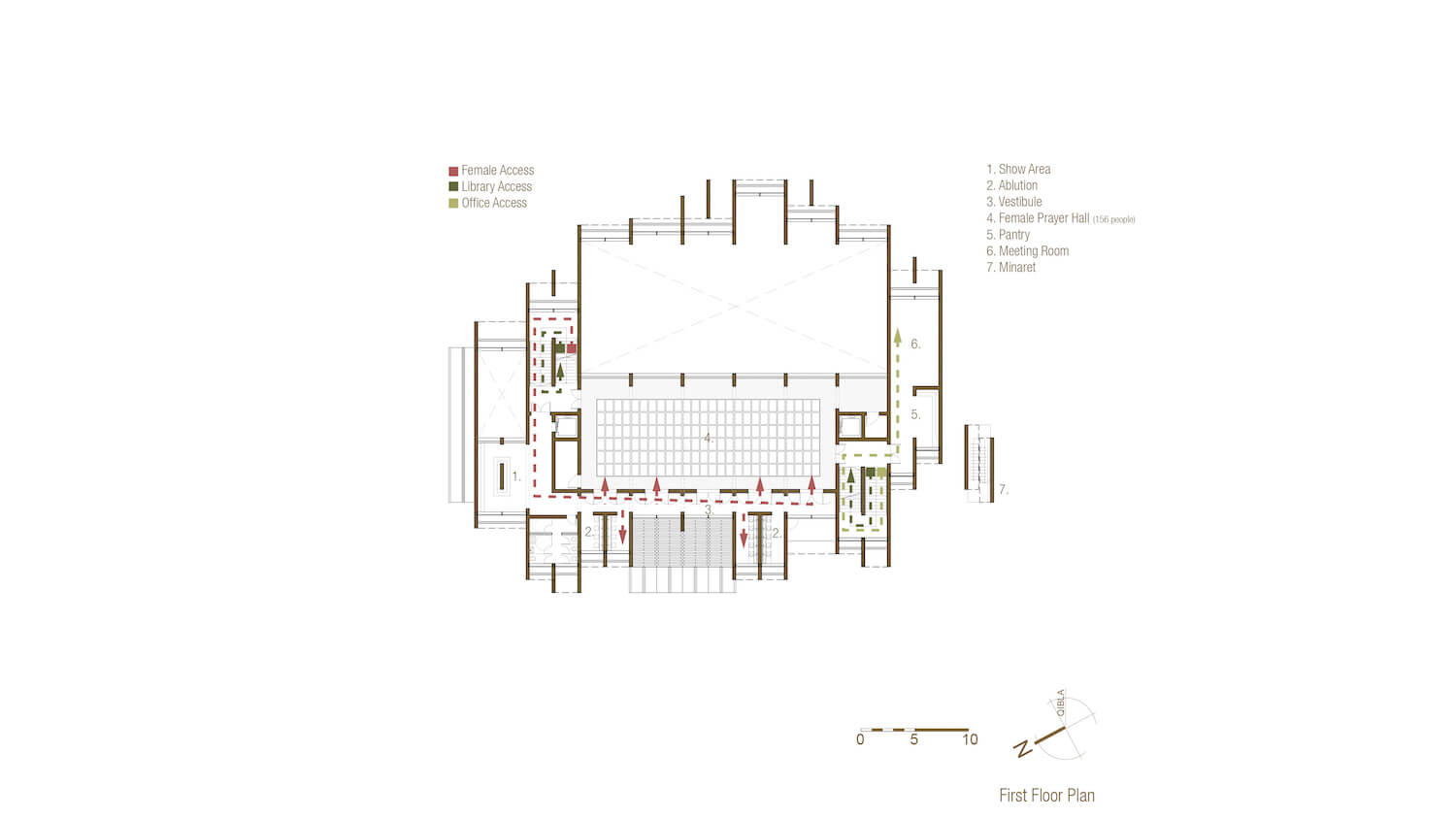 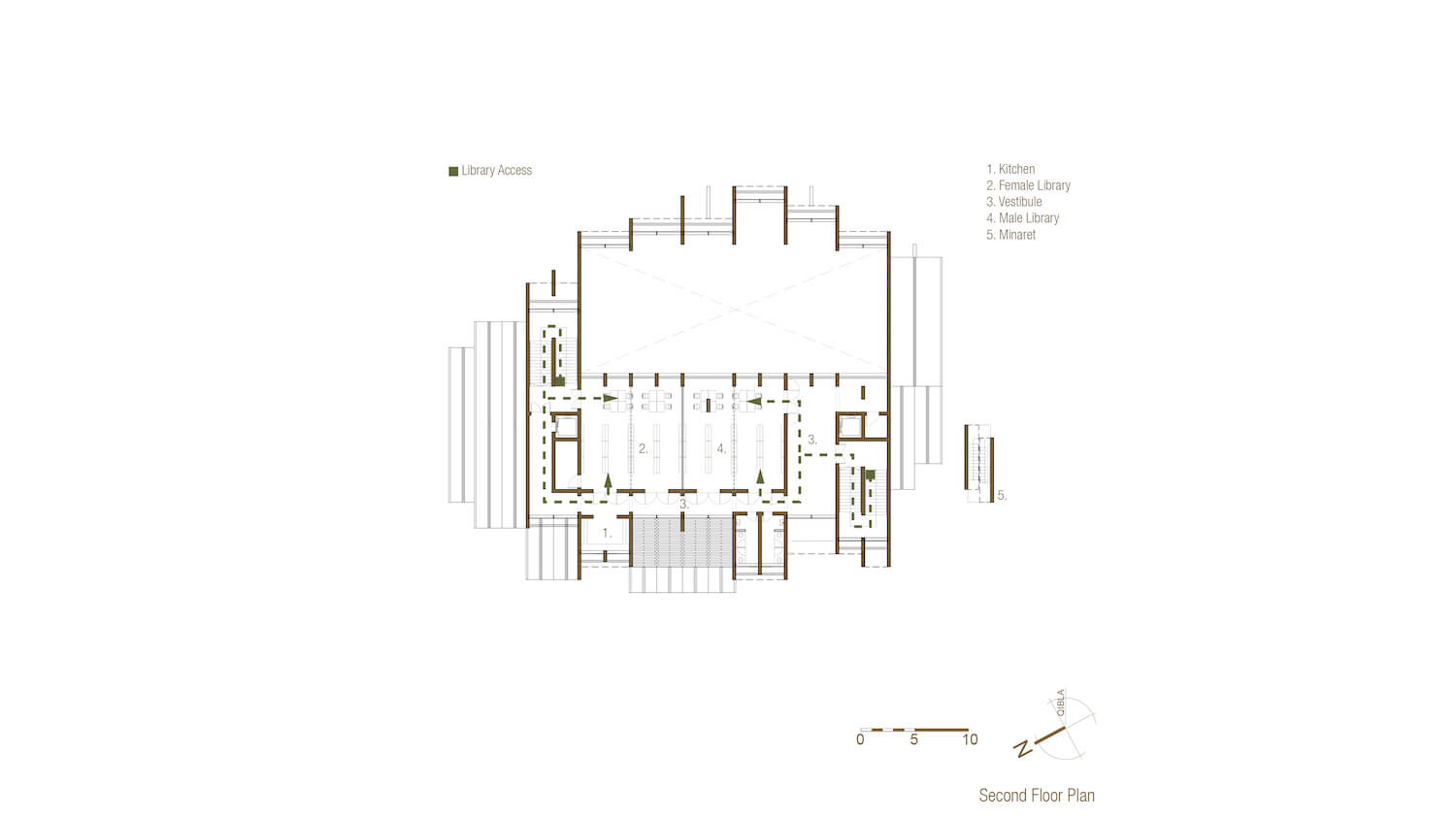 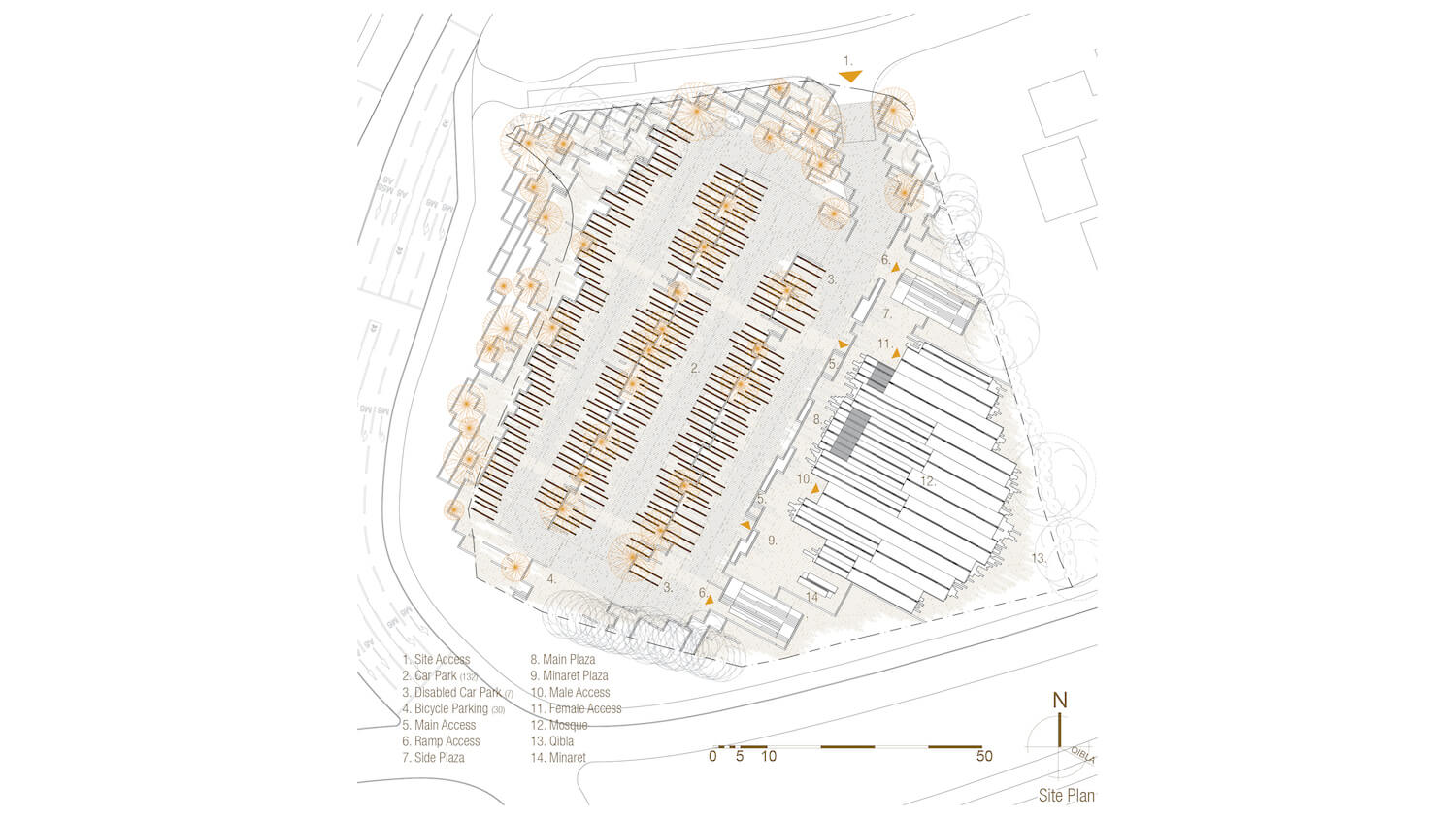 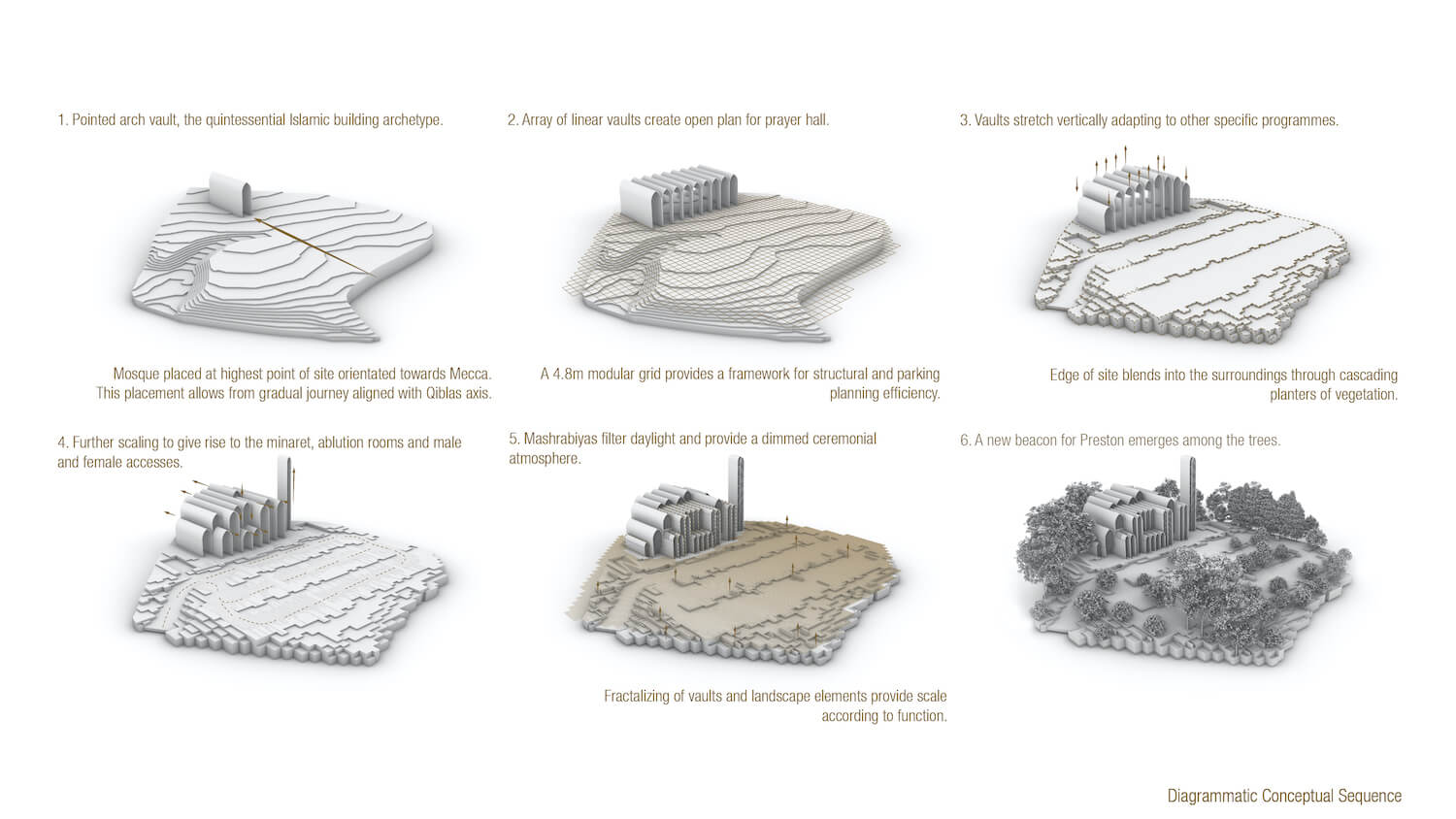 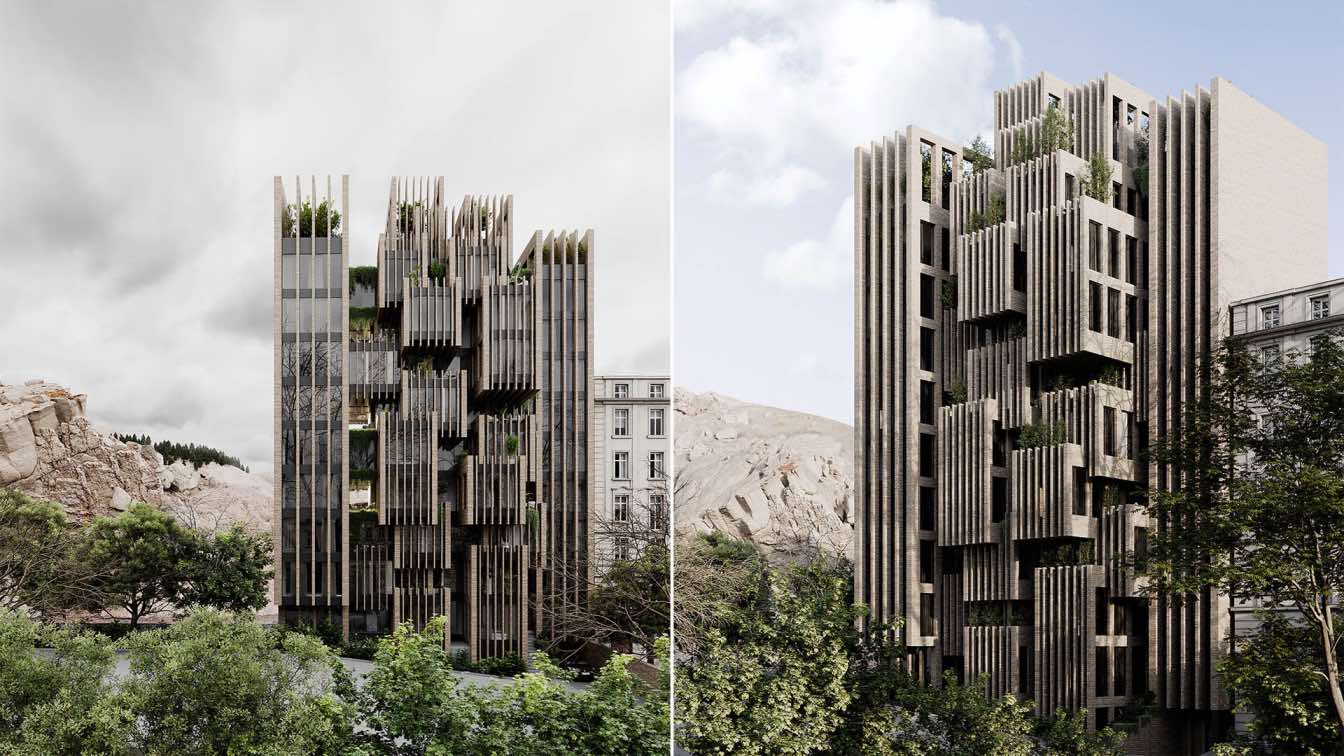 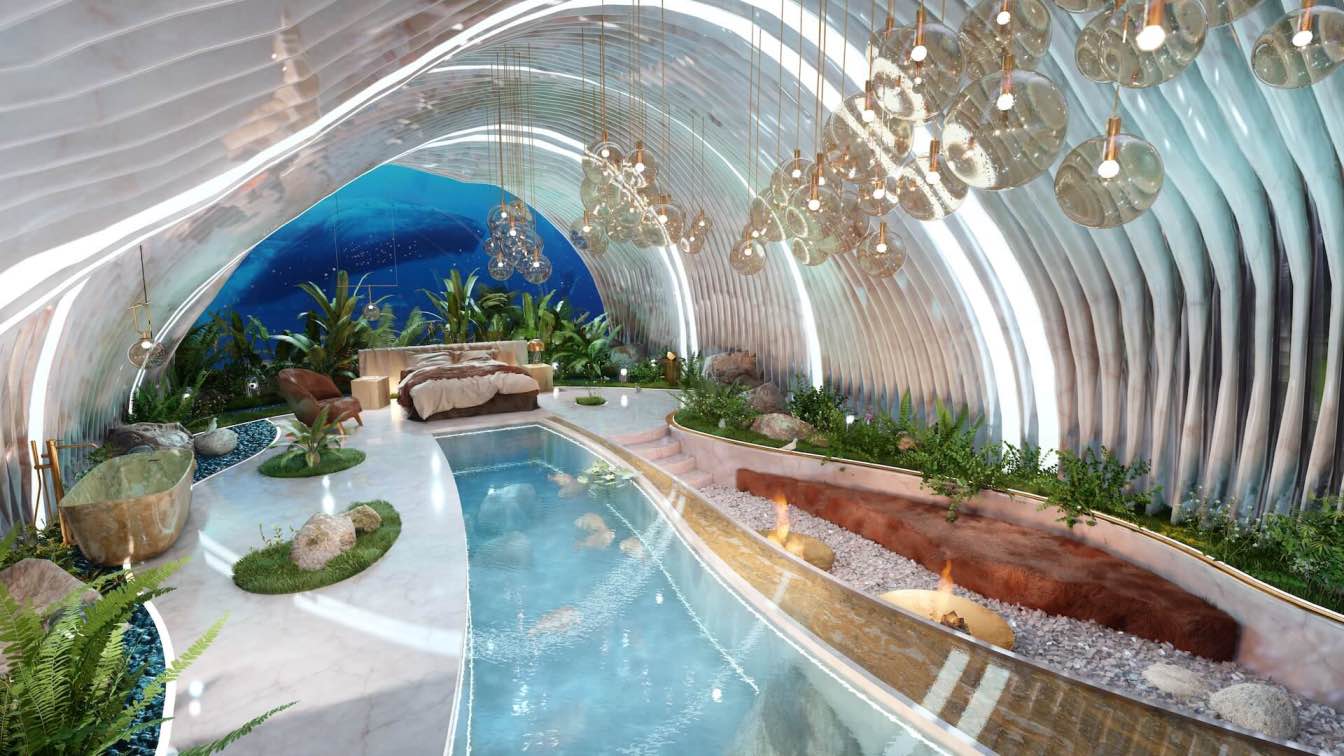 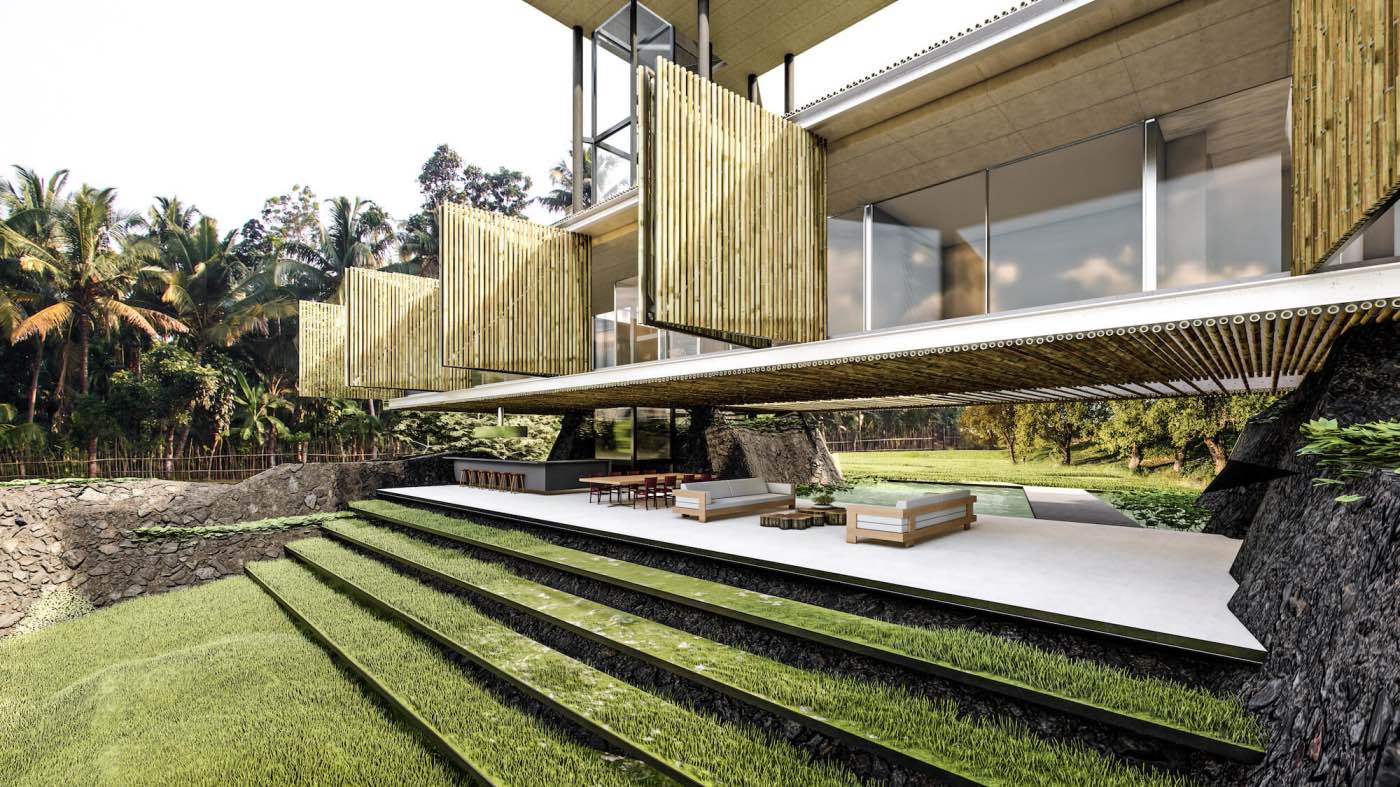 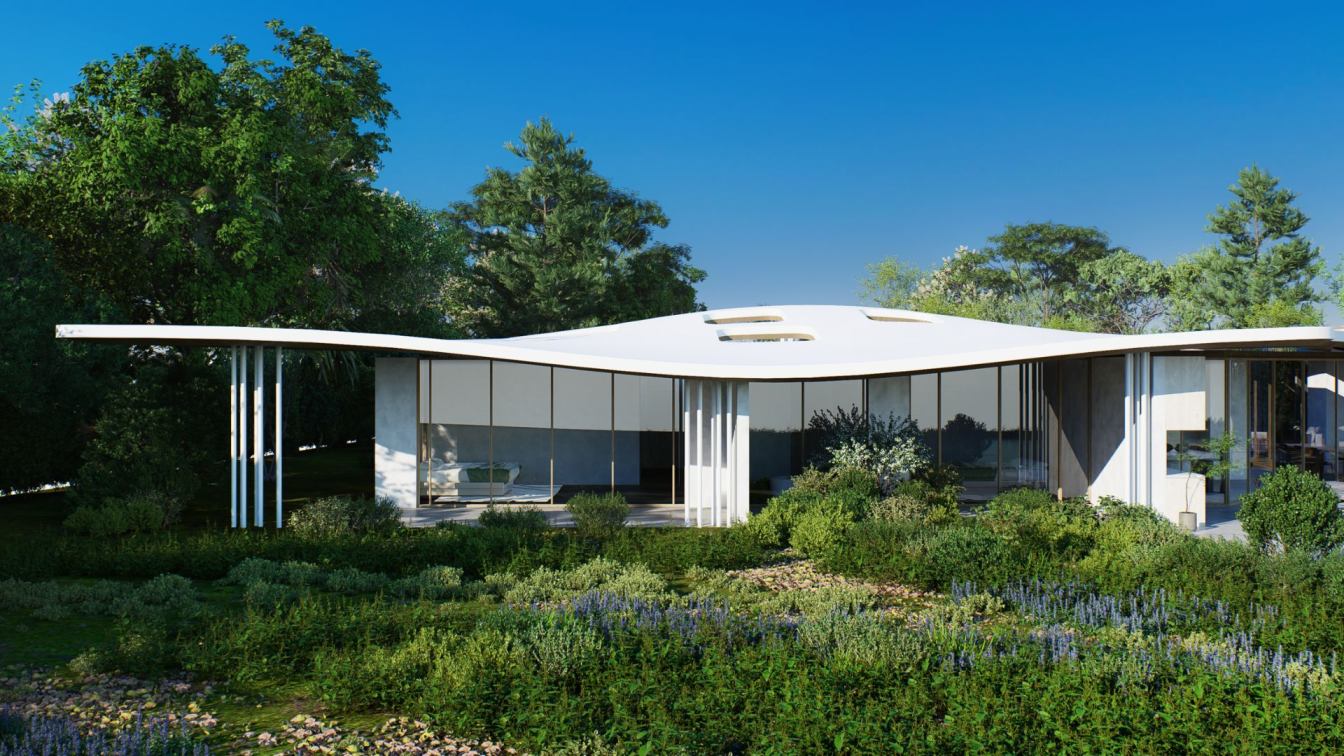